Impeachment as a pseudo-event: IDK about "high crimes" — but we've got the misde-memes!

Why was Trump's impeachment so unsatisfying? Because we're all lying to ourselves about it, and we know it 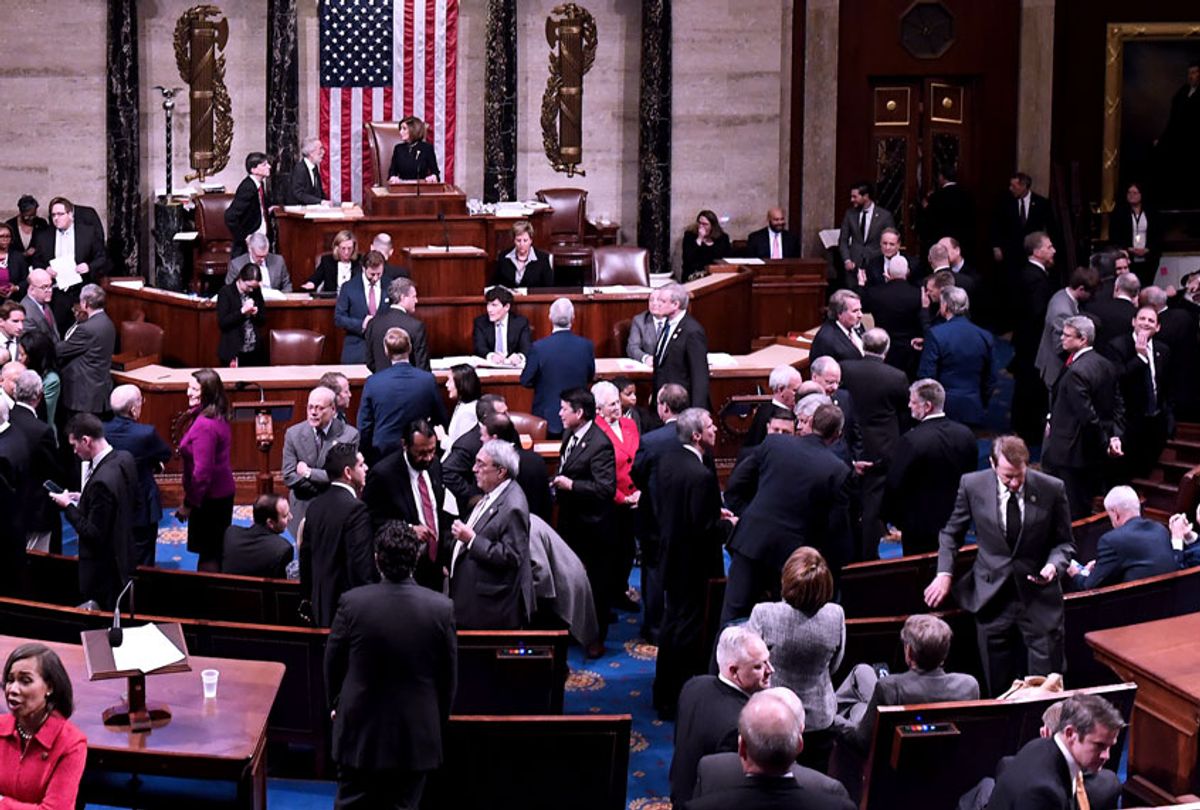 Speaker of the House Nancy Pelosi (D-CA) oversees a vote on the second articles of impeachment against President Donald Trump in the House of Representatives at the United States Capitol on Wednesday December 18, 2019 in Washington, DC. (Matt McClain/The Washington Post via Getty Images)
--

Nothing captured the peculiar character of Donald Trump’s impeachment quite like the images we saw right after the votes concluded last Wednesday night, when members of Congress milled around on the House floor taking pictures of the scene with their cellphones. On one level, it was an understandable reaction, one we’ve all felt on a smaller scale: I’m a part of this supposedly historic moment; might as well capture it for Instagram. I might have done the same thing, had I by some grotesque misfortune been elected to Congress.

But there’s more to it than that. On some deeper psychological or philosophical level, members of the House were trying to convince themselves — as indeed we all are — that this much-longed-for and lovingly imagined event had actually happened. Because it doesn’t feel entirely convincing, does it? The catharsis many liberals had imagined, with Trump and his minions disgraced or imprisoned and Republicans ashen-faced amid the ruins, is nowhere in evidence. If the vaguely floated White House theory that in some legalistic or theological sense Trump hasn’t actually been impeached yet — because Nancy Pelosi has so far declined to send articles of impeachment to the Senate — is preposterous, below it lies a tiny nubbin of truth.

Trump’s impeachment happened, but it has the inauthentic quality of a simulation or a pseudo-event, because nearly everyone involved is pretending it means something it manifestly does not. We’re not all telling ourselves the same lies about impeachment, but hardly anyone is telling the truth. It is of course easier to see this with Republicans, who pretend to believe the impeachment process has been a blatant partisan travesty meant to overturn a democratic election. But to a man (and an increasingly bizarre handful of women), they know their president is guilty of everything he’s been charged with and much more besides, and that he won a flukish, tainted election that by no stretch of anyone’s imagination could be called democratic.

If this is starting to have the flavor of “both sides do it,” let me assure you that while indeed they do I’m not asserting any equivalence. As we saw during the impeachment proceedings — if we didn’t know it already — Republicans have descended into absurdity and madness, into racist conspiracy theory and performance art and a permanent state of epistemological shift: There was no quid pro quo (until there was), Trump appointees became NeverTrumpers, a decorated war veteran was a traitor, the phone call with Volodymyr Zelensky was perfect and then troubling and then perfect again. Where was the whistleblower? Where was Adam Schiff? Where was Hunter Biden?

None of that — the crazy milk-carton signage, Jim Jordan’s shirtless rages, Devin Nunes’ dreary rhetorical questions about Burisma and Joseph Mifsud and the nude photographs of Donald Trump he is so deeply curious about — had anything to do with the actual charges against the president. But it made for compelling theater, if you could stomach the sheer brazen idiocy. As many other commentators have observed, the point wasn’t really to convince anyone that these alternate-universe theories were true. It was more about nothing being true and truth being unknowable and the whole impeachment mess not being quite what it seemed. If the first two parts of that sentence are banal Philosophy 101 material, they kind of had a point with the last bit.

Democrats are engaged, as usual, in a more complex and tormented form of self-delusion. (Republicans, arguably, are not deluded at all: They don’t believe in anything except holding onto power at any price.) Some of this is obvious enough, and I’ve written about it before: This express-lane impeachment was the result of a political compromise between progressives and centrists in the Democratic caucus — and in that sense Republicans are correct in describing it as partisan theater. Many of the “national security” freshmen Pelosi loves so much only signed on because Trump had accidentally violated the terms of an aggressive, neocon-flavored foreign policy that almost no one outside the Beltway understands. (Is there a good reason why the U.S. is maintaining a client state in Ukraine? Maybe! Who knows?)

This impeachment feels so unsatisfying to so many Democrats because the Ukraine scandal makes a poor substitute for the grand narrative of Trumpian corruption they were promised. The president was reportedly surprised to be impeached over a single failed act of extortion, which probably struck him as no big deal. You can’t entirely blame him; it's almost exactly like prosecuting Al Capone for tax evasion when you can't get him for murder.

Nancy Pelosi has darkly hinted that all this leads back to Vladimir Putin and the murky tale of the 2016 campaign (if not earlier). That is certainly conceivable. But all she’s got right now is innuendo. MSNBC viewers have been rapturously assured for three years that Trump’s entire criminal enterprise would soon be exposed and demolished by some white knight somewhere — Robert Mueller or the Southern District of New York or a state attorney general or House Democrats, once they regained a majority. None of that has happened. No one in Trump’s inner circle has been convicted or indicted for anything directly related to Russian collusion or the 2016 campaign. Democrats still have not seen Trump’s tax returns. (Because, I suspect, they don’t really want to.)

House Democrats have talked a good game about the legitimate exercise of constitutional oversight, and I have no doubt many of them believe the lines while they’re speaking them. They have been forced to pretend that they believe the system of checks and balances is working, in the face of abundant evidence to the contrary, or that it might work if only the howling ghouls on the other side would agree to play along.

This is both morally and politically defensible: It’s probably better for public morale if only one party at a time announces that the legislative process is a sham and the entire federal government is hopelessly corrupt. It has fallen to the Republicans, at this historical juncture, to speak those truths so thickly draped in lies as to render them unrecognizable.

Furthermore, defending the constitutional order and the separation of powers, and vowing to seek bipartisan compromise, have been core aspects of the Democratic Party brand for decades. We can argue that this is a dead-weight ideology dragging the party to its doom — in fact, I would argue that — but it's not going to change overnight. This created an unhappy paradox: Impeachment articles framed so narrowly that they might — in some hypothetical other universe — attract the votes of decent Republicans, even though everyone understood that was hopeless and the result made the Democrats look weak and indecisive to their own supporters.

Rep. Cedric Richmond, a Louisiana Democrat, reportedly got busted watching a golf tournament on his laptop during a Judiciary Committee impeachment hearing on Dec. 12. Read up on that guy if you want an example of how deeply dirty corporate money has infected the Democratic Party and fueled its hypocrisy. But let's give Richmond credit for not even bothering to pretend that hearing meant more than it did. Trump’s impeachment was both a historic event and a work of kabuki theater, massively frustrating to everyone and with little impact on the real world. Those House members with their phones had the right idea: Welp, we impeached him. Now go for the memes.