Recovering from Madrid: Climate summit is no match for the crisis

Troubling signs at the Madrid summit, even as capital moves decisively away from fossil fuels to renewables 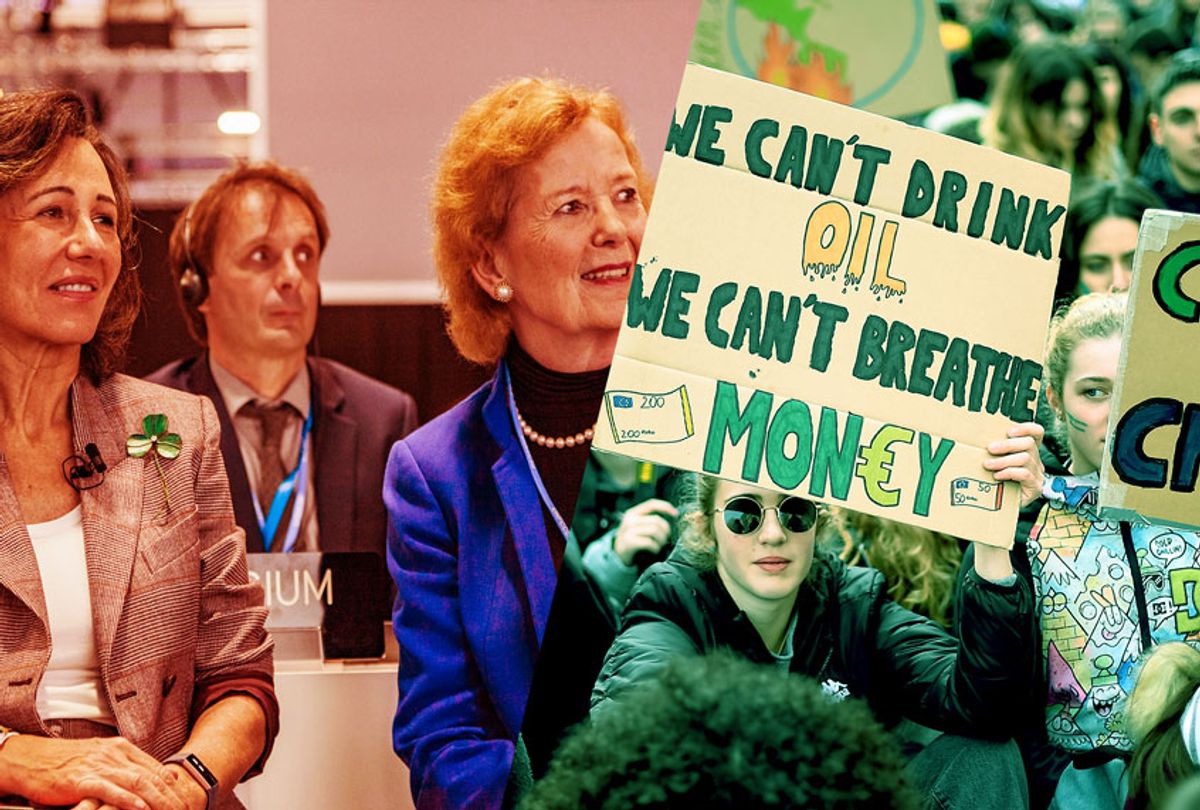 Split of participants at the Climate Summit in Madrid, and protestors from the Global Climate Strike (Getty Images/Salon)
--

The media continue to cover annual UN climate summits, like this month’s COP 25 in Madrid, as an annual “room where it happens.” They aren’t, and probably never will be again, such a central venue. Climate’s intersection with the global economy and surrounding society are too intimate to be driven by a diplomatic gathering in which, by UN rules set a quarter of a century ago, Saudi Arabia alone can effectively block action.

The UN gatherings are, however, a good blood-pressure cuff to measure the global  pulse of climate action — and the patient, clearly, is sick. Two of the widely reported alarming disease symptoms, however, are not, in fact, alarming at all. The original snake oil nostrum that emerged from Kyoto — the idea that a vital ingredient in global climate progress was enabling industrial nations to continue to pollute, as long as they paid emerging markets enough to slow growth in their emissions — failed again.

Brazil pushed hard to reopen a huge loophole allowing it to claim credit for emission reductions in the past instead of continuing to make progress at protecting its forests. The rest of the world, correctly, refused. But Brazilian President Jair Bolsonaro clearly has no good-faith desire to rejoin the global movement towards climate protection. Refusing to meet his demands actually showed that the patient, COP 25, had more vigor than expected. Pollution trading could in theory be a useful small wedge in a global climate regime, but it is hardly the centerpiece of the action. As trading advocate Rob Stavins of Harvard commented, “No deal is better than a bad deal.”

The second false alarm being sounded from the Madrid UN climate summit is that the conference failed to agree on how to compensate climate victims, meaning nations that have contributed little to the current disruption of the climate — and the intensified sea level rise, droughts, typhoons and other extreme weather that accompanies it — but are suffering the consequences. Unlike emissions trading, which is peripheral to the central task of fully decarbonizing the entire global economy, payment for “losses and damages” will be central to an eventual mechanism for managing the climate. But in any negotiation there are certain issues that offer no upside and are purely losses for all parties. These almost always get settled at the end, when all parties know what they stand to gain from the deal. So it was not, in fact, surprising that losses and damages got kicked down the road for resolution.

What is indeed a sign that the patient is suffering is that most of the major emitters — not the U.S. and not Brazil, but also not China or India — felt there was anything to gain by making clear that next year, when the time comes for nations to offer new emissions reduction pledges, theirs will be more ambitious. This COP thus failed to elicit from any of the major emitters, except the European Union, much evidence of robust and confident ambition or sense of urgency.

The U.S. and Brazil have climate-hostile national governments, so it is perhaps not surprising they offered nothing. But China and India do not share climate denialism, and are in fact struggling, for their own domestic reasons, to slash emissions and move off fossil fuels. But their governments apparently did not think that stepping up in Madrid and offering to be global leaders, with a faster transition fossil fuels than they pledged four years ago in Paris, made sense.  It's alarming that this dynamic played out even though both China and India are likely to beat their Paris promises anyway. They just don’t want to step forward as leaders, because the political chemistry surrounding climate progress right now is toxic even if the potential and the economics, as we shall see, are positive.

The EU was different. Immediately after the COP adjourned, Europe, minus Britain and Poland, agreed to a new official target: net zero emissions for its entire economy by 2050. (Britain, apart from its impending departure from the EU, had already tentatively agreed to such a goal.) But the EU was alone, and that is not, from a global perspective, reassuring.

But recall that a COP is a diagnostic tool, not an action venue.  There’s a time lag. The politics of negotiations at a COP never reflect the latest shift in political and economic realities. And while diplomats were dithering, markets were  continuing to move.

As the Madrid COP wound up with little to show, Goldman Sachs announced a major change in its investment guidelines. As the Atlantic summed this up:

Goldman is big and prestigious — and it is not alone.  For the past six months the move away from financing coal has been a major story in major financial media. Bond markets for coal projects have, beyond those funded by Asian governments, almost completely dried up.  Alongside that, insiders have been openly discussing the new reality that not only are coal companies facing prudential divestment — driven by concerns about capital security — but that investor skepticism is now seeping into oil and gas.

Indeed, facing pressure from investors to put short-term profits ahead of growth, American independent oil companies are cutting their investments in searching for new oil by 13%, after an 11% cut last year. Exxon’s position on the Dow Jones is weaker than it has been in history. Capital is pulling away from oil and gas.

As it reduced its exposure to fossil fuel risk, Goldman simultaneously announced investments of its own, which on their own roughly double the amount of Wall Street capital available to clean energy projects in the emerging markets. So capital is moving away from coal, oil and gas, and into renewables and clean energy technologies powered by renewables.

So the  decarbonization patient’s pulse, as measured in Madrid, is of concern. But there are also powerful signs of recovery in the rest of the body.