Obama has reportedly "gone to bat" for Warren despite previous friction; may "speak up" against Bernie Sanders 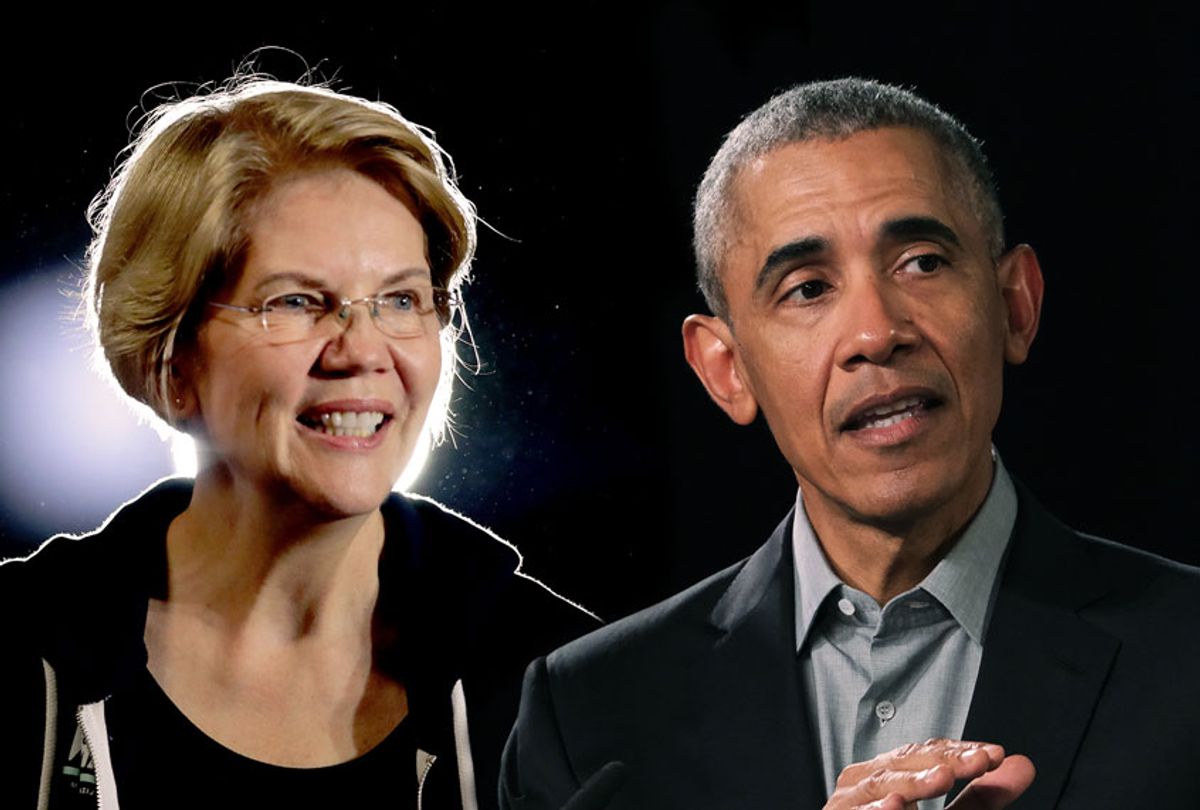 Former President Barack Obama has privately defended and praised Sen. Elizabeth Warren, D-Mass., to wealthy Democratic donors reluctant to support her after she swore off big-dollar fundraisers, The Hill reports.

Though Obama does not plan to endorse any candidates in the Democratic primary, he has “gone to bat” for Warren in private while speaking with donors reluctant to support her after she vowed to reject private fundraisers and large campaign contributions, according to the report. Obama has stressed that Democratic donors “must throw the entirety of their support” behind Warren if she wins the nomination.

“He’s asked all of the candidates who have sought his advice three questions: Is your family behind you? Why you? And why now? She checked the box for all,” a longtime Obama ally told The Hill. “I think he feels licensed to give an opinion on her because he’s ‘hired' her.”

Though former Vice President Joe Biden has touted his ties to Obama, the former president tapped Warren as a special adviser to set up the Consumer Financial Protection Bureau.

“He obviously thinks she’s very smart,” a Democratic donor told The Hill. “He thinks her policy ideas matter. And I think he sees her running the campaign with the most depth.”

Obama allies told the outlet that the former president is concerned that Democrats who work in finance “will have an issue" with Warren, and is trying to “rally the troops” preemptively.

Though Warren was selected to create the bureau, Obama ultimately chose someone else to run it. That caused tension between Warren and Obama, according to Politico, and officials in the Obama administration decried her as “sanctimonious” and a “condescending narcissist” during the effort to launch the CFPB.

The two also disagreed about Obama’s push for the Trans-Pacific Partnership, a trade deal widely criticized on the left and the right.

“The truth of the matter is that Elizabeth is, you know, a politician like everybody else,” Obama told Yahoo News in 2015 in response to Warren’s opposition to the TPP.

Warren has also criticized Obama since he left office, saying she was “troubled” by the former president’s six-figure speaking engagements in 2017.

On the presidential campaign trail, Warren has praised Obama while distancing herself from some of his policies. Obama has not directly spoken out about individual candidates but appeared to take a shot at contenders like Warren and Sen. Bernie Sanders, I-Vt., at a speech in November.

Warren, who frequently butted heads with the Obama administration after winning her Massachusetts Senate seat, has said that Obama has “giant blind spots” in his outlook and does not realize that “most Americans” are “being left behind in this economy.”

But a former Obama aide told The Hill that Obama “appreciates her intellect and is impressed by the campaign she’s run.”

“If anything, she has the most substantive achievements from his time in the White House,” the former aide said. “And he’s someone who can talk at length about her accolades.”

Last week, more than 200 former Obama aides endorsed Warren, though she has not been able to nail down endorsements from senior-level Obama aides. Earlier this month, former Secretary of State John Kerry and former Treasury Secretary Jack Lew both endorsed Biden.

Though some of Obama’s comments have been seen as criticism of Warren and Sanders’ proposals, the former president has also made comments perceived as critical of Biden.

Obama said last week that women are “indisputably better” leaders than men. “If you look at the world and look at the problems, it’s usually old people, usually old men, not getting out of the way,” he said during an event in Singapore, according to the BBC.

Asked about Obama’s comments at the debate, Biden said that the former president was not talking about him.

But Obama has criticized Biden in private, according to a recent Politico report, and Biden was upset that Obama has not publicly defended him against President Trump’s baseless allegations that Biden helped his son Hunter profit from his business dealings in Ukraine. The report also noted that Obama told aides while still in office that he viewed Warren’s rise as a “repudiation of him” and his economic policies.

Still, Obama has reportedly vowed to stay out of the primary and campaign for whoever wins the nomination — with one possible exception.

Obama “said privately that if Bernie [Sanders] were running away with the nomination, Obama would speak up to stop him,” Politico reported.