"If Bernie were running away with it, I think maybe we would all have to say something," a close Obama adviser said 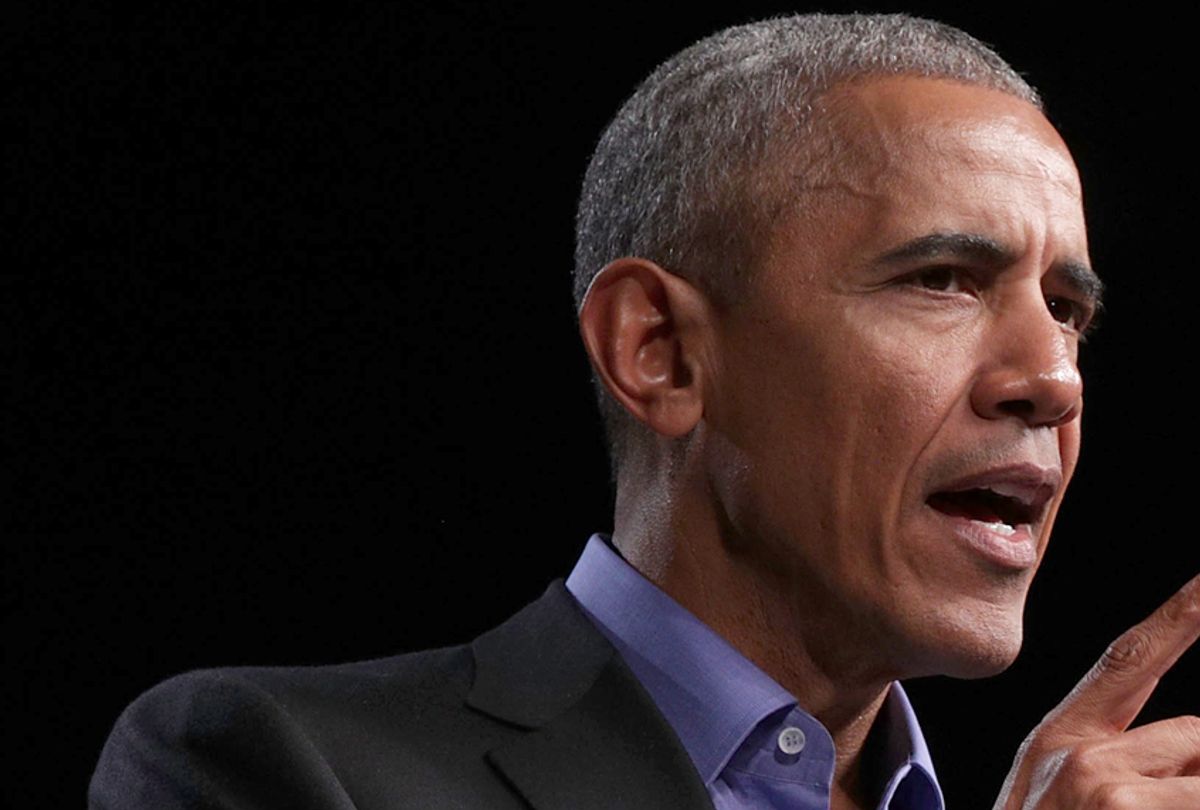 Former President Barack Obama privately told advisers that he would intervene and speak out to stop Sen. Bernie Sanders, I-Vt., from winning the nomination if he surged ahead, Politico’s Ryan Lizza reports.

The new report details meetings and discussions that nearly all Democratic presidential candidates have had with Obama as they seek the party's nomination. Lizza describes Obama’s preferred role in the primary as “providing guardrails to keep the process from getting too ugly and to unite the party when the nominee is clear.”

But based on interviews with multiple Obama advisers, Sanders is a “potential exception.”

When Sanders was seen as a bigger threat to win the nomination, Obama privately vowed to break his public pledge not to intervene in the primary and speak out to stop Sanders from winning, according to the report. A spokesperson for Obama did not deny the comment but pointed to Obama’s recent remark that he would support whoever the nominee turns out to be.

“I can’t really confirm that,” a close adviser to Obama told Politico. “He hasn’t said that directly to me. The only reason I'm hesitating at all is because, yeah, if Bernie were running away with it, I think maybe we would all have to say something. But I don't think that's likely. It's not happening.”

Asked about the remark, a close friend of Obama’s told Lizza that “Bernie’s not a Democrat.”

Another adviser said that Sanders’ rise was the only thing that could prompt Obama to break his silence outside of a contested convention.

Obama did not issue such dire warnings about Sen. Elizabeth Warren, D-Mass., who seen as the other progressive frontrunner in the race, but he did tell aides while he was still in office that he would see Warren’s rise as a “repudiation of him” and his economic policies.

Obama appeared to hit out at Warren during an event earlier this month when he warned Democrats not to be “deluded” that “resistance” to “bold” ideas will simply melt away.

The nation, he said, is “less revolutionary than it is interested in improvement.”

Obama also appeared to hit out at Democrats like Warren who back the decriminalization of unauthorized border crossings.

“You go survey the average Democrat, and they still think there's such a thing as a border,” he said. “And if you don't speak to those values, then you may be in for a rude shock.”

He added that candidates should not confuse “left-leaning Twitter feeds” as the voice of the electorate.

“The average American doesn't think we have to completely tear down the system and remake it,” he said.

But while Obama has expressed reservations about the progressive candidates in the race, centrist presidential hopefuls from his own administration have not been met with enthusiasm either.

He warned former Massachusetts Gov. Deval Patrick, a longtime friend whose candidacy Obama previously welcomed, that it was “too late” for him to jump into the race because all of the “money and talent” had been snatched up by the rest of the field. Patrick chose to ignore Obama’s warnings and announced his candidacy before being met with entirely empty rooms as he hit the campaign trail.

“He’s still pretty sensitive about it,” a source close to Holder told Lizza. “He was really frustrated about having arrived at the decision not to run. Holder couldn’t get in because Biden and Holder have the same set of people. Once Biden was getting in, then Eric couldn’t get in. So that frustrated Holder. It blocked him. And Biden has turned out the way they all feared, and that’s really frustrating to Eric.”

Biden himself has been on the receiving end of some of Obama’s most biting criticism.

During one discussion, Obama noted that he had an intimate bond with the electorate during his 2008 run, which he no longer has. “And you know who really doesn’t have it?” he asked. “Joe Biden.”

Obama, who passed over Biden for Hillary Clinton in 2016, told Biden’s team that the former vice president would not automatically get his endorsement and would instead have to “earn it.”

A source close to both Obama and Biden told Lizza that Biden was particularly disappointed that Obama did not defend him amid Trump’s baseless allegations involving Ukraine.

“I do think there's frustration when Joe Biden and Hunter Biden get attacked by Republicans on the Ukrainian thing and they say, ’Obama and his administration looked the other way back when this was happening,’ and Obama doesn't say anything,” the source said. “The Biden people ask, ‘Why won’t Obama say something?’”

Those close to him say Obama is not supporting a specific candidate, even if he is not a big Sanders fan.

“As I talked to him, I'm not sure that I can honestly say that he has a particular candidate who he would at this point say that he’d vote for,” Holder told Lizza.

Obama has posited his skepticism about certain candidates as concern that they may not be able to defeat Trump and govern effectively.

“Can you win?” Obama asked at a recent donor event. “Not are you guaranteed a win, but do you have a theory, a pathway whereby you win not just a primary but you also win a general election, because there is not an empty exercise if you, in fact, get in. Your goal should be to actually ultimately become the president and then be able to lead the country and the world in a serious way.”

Some on the left have pointed out that polls suggest that Sanders is just as electable as the candidates Obama has not vowed to speak out against.

“I haven’t seen any polling where Warren outperforms Sanders in a general election, which suggests Obama would prefer the less electable candidate,” wrote journalist Zaid Jilani.

Activist Shaun King cited another poll to point out that “Bernie is the most liked, most trusted candidate in the race.”

Some suggested that Obama’s outlook on Sanders represents a deeper divide within the Democratic Party.

“Since losing 2016, Dem elites have waged a prolonged effort to stop Bernie,” wrote journalist Aaron Maté. “Bernie is the obvious answer to the neoliberal Clinton-Obama legacy voters rejected, & is an actual anti-establishment candidate, unlike Trump. They care more about their own power than unseating Trump’s.”

Many on the left already felt that this was the case before Lizza’s report. Former Salon writer David Dayen wrote at The American Prospect last week that Obama’s pushback on progressive proposals “are music to the ears of the wealthy and powerful.”

"This defense of the reigning economic order, originating with the donor class and media allies, with its effective abandonment of the vulnerable and disenfranchised, with nothing for those struggling to make it in a rigged economy, is a recipe for social and political unrest," he wrote. "From lofty heights, Obama has now become a dampener of hope, a barrier to change and a threat to progress."