Former Massachusetts Gov. Deval Patrick joins 2020 race: "This won't be easy, and it shouldn't be"

Patrick, who is joining the race after initially ruling it out, said he is running for people who "feel left out" 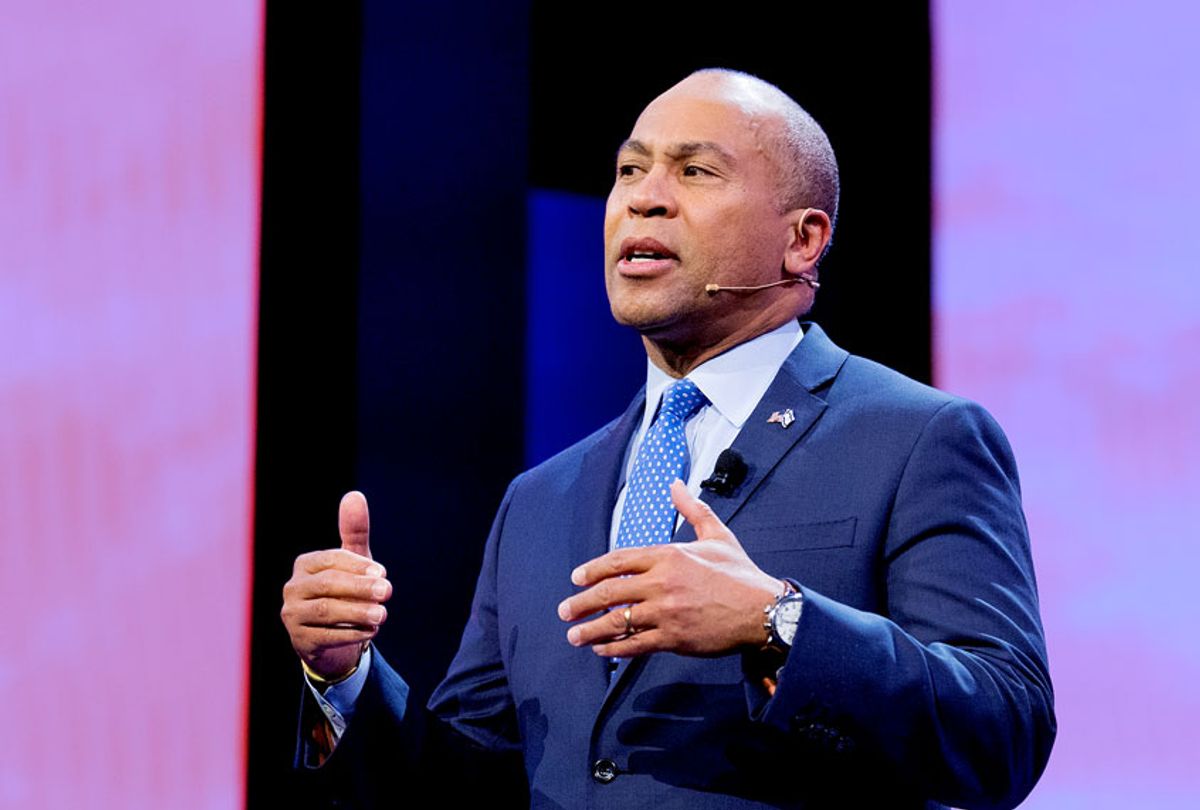 Former Massachusetts Gov. Deval Patrick officially threw his hat into the presidential ring, the latest sign that some establishment-aligned Democrats feel uncertain about the party's current crop of contenders.

Patrick, the 18th candidate to jump into the race, declared his candidacy in a video released Thursday morning. In his announcement, Patrick outlined his reasons for launching a last-minute presidential bid, saying he was running for people who "feel left out" and want a future "not built for you but built with you."

Patrick, 63, served two terms as governor of the New England state and is one of the highest-profile black leaders in the Democratic Party. His late-entry into the race is a sign that some establishment Democrats are worried that the party's current front runners — former Vice President Joe Biden, Massachusetts Sen. Elizabeth Warren and Vermont Sen. Bernie Sanders — could unite the party's moderate and liberal voters to deny President Donald Trump a second term in the White House.

He appeared on "CBS This Morning" later Thursday morning to further explained why he joined the race after initially ruling out a run.

"You can't know if you can break through if you don't get out there and try," he said, noting that he wanted to united voters. His slogan, notably, is "Deval For All."

Pressed on a number of policy issues that have divided the Democratic primary field, Patrick said he did not support "Medicare for All" and instead favors a so-called public option; that he supports cancelling or significantly reducing student debt but believed there were "other strategies that we've heard about" to do that; and that a wealth tax on the richest Americans "makes a lot of sense directionally" but that he would push for a "much, much simpler tax system for everyone."

"I don't think that wealth is the problem. I think greed is the problem," he said, noting that "taxes should go up on the most prosperous and the most fortunate" but "not as a penalty."

Patrick is the second 11th-hour entrant into the race in under a week. Former New York City Mayor Michael Bloomberg recently filed paperwork in two states.

Unlike Bloomberg, a billionaire businessman who could self-fund his campaign, Patrick will have to quickly raise money to finance a campaign operation and bolster his familiarity with voters.

Patrick, who is not widely known across the country, made history as the first black governor of Massachusetts. He could gain momentum in neighboring New Hampshire, the first-in-the-nation primary state, though he would likely face tough competition there from two other candidates who live next door: Sanders and Warren.

Bloomberg, for his part, plans to skip the four traditional early-state contests in Iowa, New Hampshire, Nevada and South Carolina, where candidates have camped out for months to make their case to voters. Instead, he plans to mount his candidacy in big, delegate-rich primary states that vote in March's "Super Tuesday" competitions. Those states include Alabama, Arkansas, Alaska, California, Colorado, Maine, Massachusetts, Minnesota, North Carolina, Oklahoma, Tennessee, Texas, Utah, Vermont and Virginia.

More than 1,300 delegates can be won on Super Tuesday when about 40 percent of the total delegates up for grabs. The Democratic presidential nominee ultimately needs to win a majority of 3,979 delegates. By comparison, only 155 candidates can be won in the four early primary states.

After leaving office in 2015, Patrick, a close friend and ally of former President Barack Obama, joined a private equity firm co-founded by Mitt Romney, a former governor for Massachusetts himself and currently a senator from Utah.

Patrick told The Boston Globe on Wednesday night that he had resigned from Bain Capital, effective that day. His stint in private equity has drawn criticism in the past and is likely to come under renewed scrutiny as he enters the primary race.

The former governor also told The Globe that he had spoken with Obama, and the former president had offered him advice.

Last year, when deciding to forgo a White House run, Patrick explained that he and his wife, who had been given a cancer diagnosis at the time, were worried that the "cruelty of our elections process would ultimately splash back on people whom Diane and I love, but who hadn't signed up for the journey."

Patrick's wife has since been given a clean bill of health, and he appeared to suggest that her recovery paved the way for him to launch a campaign.

"I wanted to run from the start," he told The Globe.

In his announcement video, Patrick attempted to issue a hopeful and unifying message.

"We will build as we climb, to welcome other teachers and learners, other seekers of a better way and builders of a better future," he said. "This won't be easy, and it shouldn't be."