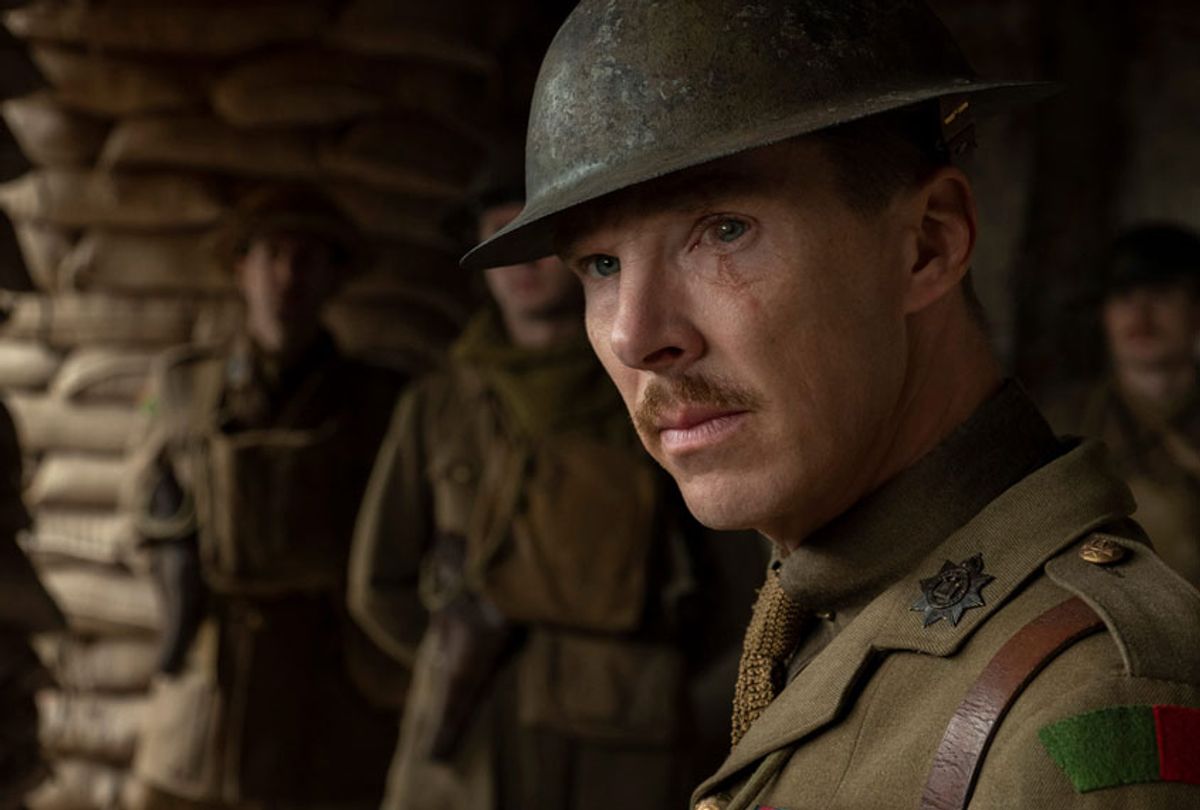 “1917,” Sam Mendes’ intense “single-take” war film, chronicles the efforts of Lance Corporal Blake (Dean-Charles Chapman) and Lance Corporal Schofield (George MacKay) to deliver an important message from General Erinmore (Colin Firth) to Colonel MacKenzie (Benedict Cumberbatch). McKenzie must call off a planned attack of the Germans because it is in fact, a trap. The young men have to arrive at their destination by sunrise, or 1,600 soldiers will be killed — including Blake’s brother. Soon, the youths are climbing over the wall of their trench to head off on what is surely a suicide mission.

The film unfolds over an approximately 24-hour period and it builds its tension as the characters go from set piece to set piece. There are atmospheric touches. Viewer can smell the stench of death, a swarm of flies, and feel the mud and muck the young Lance Corporals plod through. The set design is often quite impressive as empty houses or fields, including a “no man’s land,” show the remnants of wartime and provide obstacle courses for Blake and Schofield.

But narratively, the film often feels like a theme park ride. The characters pass through the barbed wire and into a field of horrors. They enter an underground space with huge rats and other areas where hidden dangers await. They encounter snipers in what they hoped were safe spaces. “1917” wants to recreate the thrill of a video game that might be titled, “War Is Hell.”

The first half of the war drama is strongest. Episode after episode is ferociously intense, and there are myriad images of death including bodies and skeletons and animal carcasses. It is haunting at times, and in his performance MacKay is adept at expressing open-mouthed shock at what Schofield sees at every dramatic turning point. This is pretty much what passes for character development in the film. Schofield makes some questionable (or bad) decisions, which are actually interesting to contemplate — such as, why do he and Blake help a German in one encounter, and why doesn’t he take extra bullets when the opportunity avails? The journey also creates a series of breathless moments — such as a scene where Blake and Schofield must escape a collapsing structure, or when Schofield sputters and coughs after his head falls below the surface of a river.

Famed cinematographer Roger Deakins tracks the young soldiers closely as they experience a series of dangerous encounters. The characters barely have a moment to rest, and Mendes does not want audiences to relax, either. He often keeps his camera moving to keep viewers engaged. It may be hailed as “virtuoso,” filmmaking, but it is gimmicky, especially during a waterfall sequence. There is certainly plenty of dramatic tension, but some of it consists of wondering if the characters (or the cameraman) are going to suddenly step on a landmine. Whenever there is a quiet moment, and the young men talk about things like cherry blossoms or medals, it is not long before something horrible is about to happen.
The second half, which relies more on the “beat the clock” narrative, is less successful. It plays up the impending tragedy in ways that feel manipulative, with time passages being expanded or contracted as it suits the narrative. (It would spoil the film to describe scenes that stretch time, but viewers may flash on the superior antiwar film, “Gallipoli,” in one instance). Sometimes the urgency, and by extension, the film, goes slack.

Another drawback with “1917” is the painfully intrusive score, by Thomas Newman. There are too many scenes where the music tells viewers exactly what to feel. The film is more powerful when Mendes trusts audiences to experience a moment. And during the exciting scenes, where planes or bullets fly too close to the characters, viewers can feel their hearts racing or the blood pumping in their ears. The sound design is seat-shaking; why add music?
There are also some didactic scenes where characters explain something obvious, and some contrived moments, such as an encounter Schofield has with a French woman (Claire Duburcq) so something planted earlier in the film can have a payoff.

To his (and the film’s) credit, Deakins creates many luminous images using a palette of contrasting muted colors — from a soldier’s reflection in muddy water, to a striking sequence set at night, to episodes set in an open field, abandoned buildings, and trenches. There is also a “you are there” feeling generated by the look of the film that helps viewers latch on to Schofield as their surrogate self. His roving camerawork is best in the trenches, where viewers have a shoulder-high view of the action, or in some of the abandoned buildings where Mendes creates a sense of claustrophobia. But as scenes are staged in open spaces, where the characters are vulnerable to attack at any possible moment, the camerawork can be distracting and pull viewers out of the story.

Where “1917” is most effective is when Blake and Schofield are stuck in a “him or me” situation. They each help the other through a difficult or painful moment, their brotherhood is always at risk. This is echoed in a poignant scene where Schofield encounters a diverse group of soldiers joking about their superior during a truck ride. He is at the quiet center of the frame, absorbing all that is going on around him but shell-shocked at what he has endured. It’s a revealing sequence, and Mendes should have included more telling scenes like this one.

MacKay’s performance is terrific, but the best contributions come from name actors who all must have agreed to do exactly one day’s work. Andrew Scott (the hot priest on “Fleabag”) gives a scene-stealing turn as the foulmouthed Lieutenant Leslie, who assists the boys as they go off on their mission. (He gives them an amusing baptism). Likewise, Mark Strong makes a good impression as Captain Smith, who offers Schofield some sound advice, and Richard Madden’s one scene is quietly moving. Even Firth and Cumberbatch, who have cameos, make the most of their brief screen time.

Despite the film’s salient features, “1917” feels oddly underwhelming. It might succeed in making viewers as exhausted as the characters, but it lacks the emotional punch this story requires to make it a lasting impact.