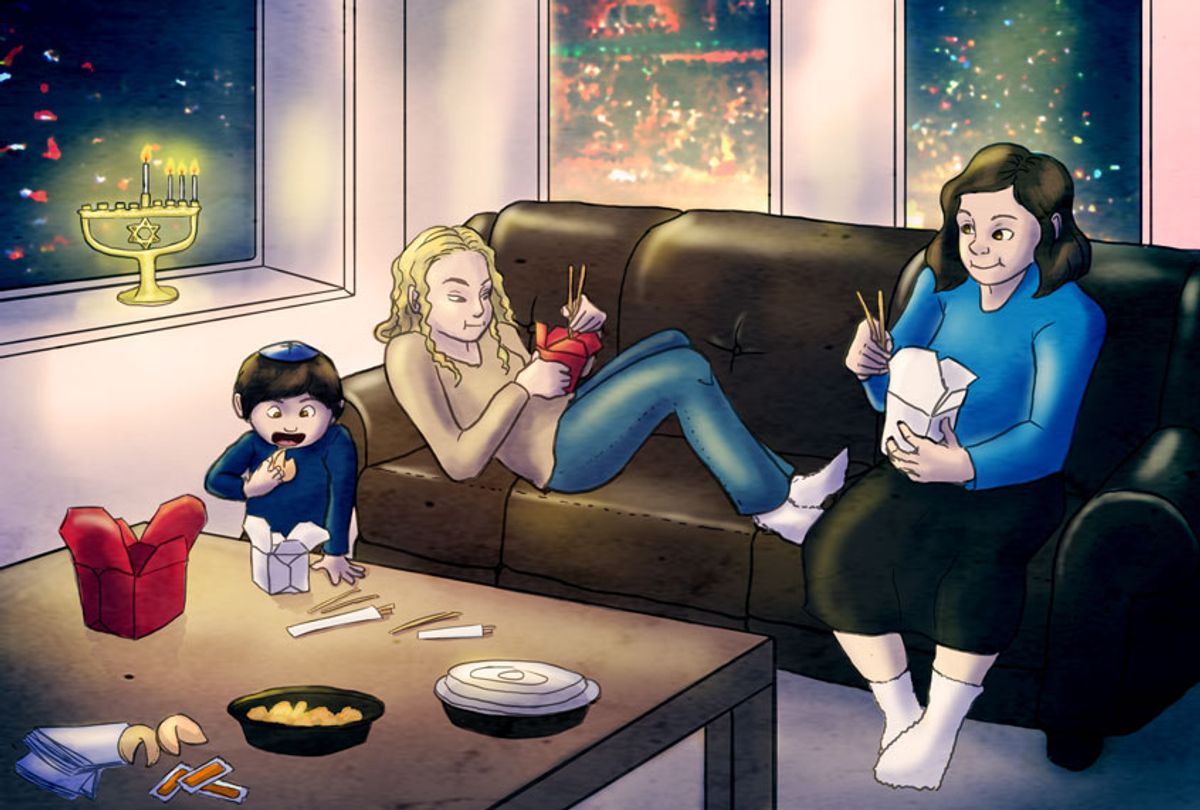 An entire four-page spread in The Newish Jewish Encyclopedia: From Abraham to Zabar's and Everything in Between covers Christmas, which co-author Stephanie Butnick tells Salon is also "a really important Jewish Holiday."

Among the topics covered in the encyclopedia of all things Jewish and Jew-ish is the history of eating Chinese food on Christmas. Here, Butnick recalls the tradition, in her own words:

"A lot of people who are Jewish or who know Jews may know that a lot of Jews eat Chinese food on Christmas. And that actually has a real cultural history starting on the lower East side with the restaurants that were there. There were Italian restaurants, which had a lot of Christian iconography in there. And that would make Jews feel not necessarily particularly welcomed. And also Chinese restaurants. In Chinese food, you found a lot of the same flavor profiles as you do in sort of traditional Jewish cooking — whatever you may think of as that.

"And so basically, you have sort of like these onions — these over cooked vegetables — and that was very familiar. And then there's this other idea of safe trace, which was at that time a lot of immigrants on the lower East side were kosher. But the way Chinese cuisine got around that for them is that it would be sort of like minced, and cooked and inside an egg roll. You wouldn't really ask what was in it. You sort of knew that there was pork in it, but no one really necessarily cared so much. And the biggest thing is that there's no dairy in Chinese food. So if you were a kosher Jew and you didn't mix meat and dairy, this was a safe meal for you because you could have meat there. And you could basically have everything there, because you knew there wasn't any dairy.

"And the Christmas connection is that Chinese restaurants were often open on Christmas. And so I think that there is something really interesting here, because we sort of now associate this as a sort of funny, campy 'Jews do Chinese food on Christmas.' But there actually is a real cultural history there, and that's why it was so important to include. Because it's basically saying, even this very secular tradition has real roots and has a historical grounding. And it actually makes it, I think, that much more special if you are someone who observes this tradition to know that."

Reflecting on the holiday season, Butnick told Salon that she is very proud to be a Jew.

Like this recipe as much as we do? Click here to purchase a copy of “The Newish Jewish Encyclopedia.”