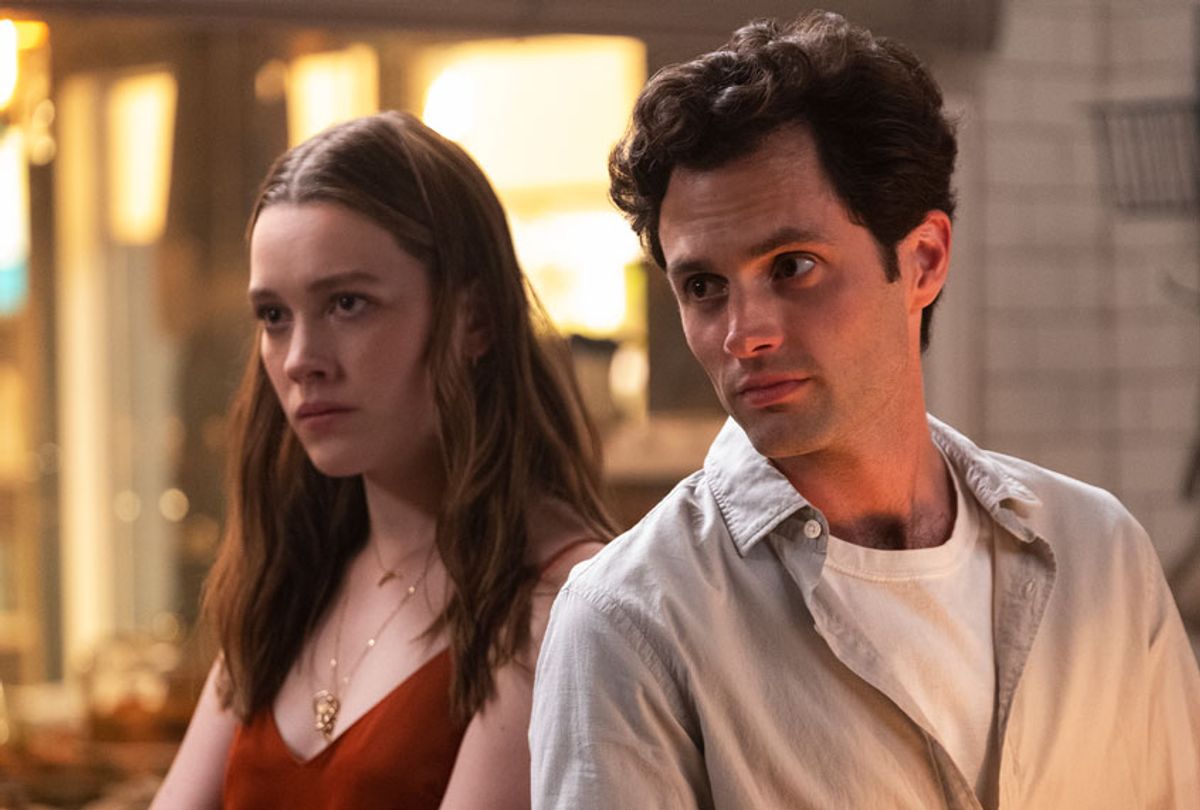 Victoria Pedretti and Penn Badgley in "You" (Beth Dubber/Netflix)
--

About a year ago, "You" became a streaming phenomenon on Netflix, a particularly noteworthy and strange feat for a series that debuted on Lifetime in the fall of 2018 to much fanfare and paltry ratings. The man we once knew as Joe Goldberg, Penn Badgley's stalker masquerading as a chivalrous suitor, might have described it as a case of ill-fated coupling: Right book, wrong store. Lifetime is a Boomer channel. Younger viewers Netflix and chill, and the purported millions who discovered Badgley's lady killer for the first time were smitten . . . some for all the wrong reasons.

Plenty of viewers grasped what Badgley sought to convey in his portrayal of a book obsessive whose pathology leads him to hunt women, one lover at a time. Badgley's man is a reader, and he sees women as open textbooks to be studied and mastered. When they deviate from the plot he's imagined, his compulsion grows deadly.

"Ditto," Badgley tweeted in response. "It will be all the motivation I need for season 2."

New "You" episodes show that actor making good on his promise, as has showrunner Sera Gamble. Like the first season of "You," Season 2 is based on Caroline Kepnes' sequel to "You," titled  "Hidden Bodies." And Gamble transforms a terrifying first season story about the false lure of the romantic hero into a different danger, this time informed by the city's reputation for artifice and social masking.

Badgley, meanwhile, uses that motivation to build a more desperate and animalistic performance than before. The Joe who was with Guinevere Beck (Elizabeth Lail) was a charmer, as along as you didn't listen to his confessional voiceover narration. But his blithe mien dissolved as the first season wore on,  growing meaner and coarser as his paranoia increased.

In these new episodes, Badgley's character has abandoned New York City for Los Angeles, sent running by the shocking return of a former love he believed to be dead and buried, Candace (Ambyr Childers).  Badgley's transplanted character radiates with a sort of perilous optimism as he tries to persuade himself that maybe a life new city will allow him to leave the past behind.

In Los Angeles, our star antagonist takes a new name, Will Bettelheim, and claims to be striving to become a better man. He lands a job in an appropriately crunchy upscale grocery store called Anavrin — Nirvana, only spelled backward — with a twee book section curated for image instead of substance . There, in the aisles of its pristine produce section, Will meets Love Quinn (Victoria Pedretti), a confident woman with a bright smile who comes on to him for a change, and makes it her mission to figure out what the man she knows as Will tick.

"You" seduces the viewer by presenting the story entirely from the perspective of Badgley's character, making him a bit like Dexter Morgan, though more erotically focused and, in his telling of his story, romantic. This explains the wacky fan obsession with Badgley as Joe, I suppose, but it also gives fair warning to the viewer that everything we see is by way of Will's interpretation and therefore requires a dose of harsh skepticism.

In this second season, he carries a soul-sickness about him, wondering whether redemption is capable for someone like him.  But this, too, is a studied aspect of his derangement. Love is yet another slice of perfect girl cake, a woman worthy of earning by bettering oneself. And what do you know – she's also the store's chef. She makes flawless dishes, has a slight wild streak, and she's the daughter of Anavrin's wealthy owners.  Will is already smitten before he learns these details.

Being who and what he is, he proceeds to do everything he can to control this romantic crash. But Love is not so easily manipulated, a challenge that bewilders Will as much as it arouses him. Pedretti's stalwart portrayal of Love immediately gives the character a consistency lacking in the fragile Beck. This, in turn, makes Love's mood swings land with additional force.

Will's advances and retreats, and her irritation with his games, creates an alluring dance between Will's expectations of who he wants Love to be and who she actually is. For a brief time it even seems as if he's stumbled upon something real and may get that fresh start he claims to yearn for.

But Candace is still out there and does not intend to peacefully let go of her suffering.

Whenever a series uproots locale, viewers have good reason to worry about a quality decline. Season 2 of "You" is an exception, creating new obstacles for Badgley's stalker by placing him in a town full of practiced fakery.

Love's circle intersects with the worst of Hollywood and the most well-meaning, ludicrously open New Agey spirituality in ways that Will barely understands.

Concurrently, it  moves him (and the audience by proxy) to examine his internalized expectations concerning who Love ought to be versus who she is. Much of Will's modus operandi mirrors a version of romance so many people have been conditioned to follow, whether by way of literature or romantic movies.

And Wills relies upon becoming everything to the object of his desire, finding a way into their heart and soul, and then erecting barriers to keep the person all to himself. This is how "You" makes Will, or Joe, or whoever he is, into a observational device through which we might see (hopefully with horror) the stories we use to dress the object of our desire in expectations that only exist in our own heads.

If that tailoring doesn't fit, maybe that's the other person's fault as opposed to an error in our own misperception. Beck's failure to be the Season 1 stalker's splendid dream ends up killing her. Love's defiance of his expectations beguiles him and the viewer, and just might keep her alive . . . but maybe not.

Besides, other aspects of Will's life allow him to follow the predictable patterns of an imbalanced white knight. His new apartment building has its own version of the kid he decides to protect, only now it's a 15-year-old classic cinema buff named Ellie (Jenna Ortega).

She charms Will into a teasingly contentious big brother/little sister relationship, where she gives him movies in exchange for books. Conveniently Will finds out she's interning for a famous comedian named Henderson (Chris D'Elia) who's dragging a trail of sexual misconduct allegation behind him, so voila: a new hobby.

Together, these hangers-on constitute most of the minor weak points in the season, the other being its insistence on filling in Will's/Joe's origin story by flashing back to his childhood. Nevertheless, they don't get in the way of the reckoning coming Will's way in the form of Candace and her unearthed scorn.

Better still, the season closes with a twist ending you may not see coming . Even if you manage to guess what happens, the last frames are sufficiently skin-crawling to set up another round with Joe, or Will, or whomever he decides to become next.

The second season of "You" is now available to stream on Netflix.