The president and the killer: Why Donald Trump's embrace of Eddie Gallagher is so dangerous

Eddie Gallagher was such a toxic Navy SEAL his own men turned on him. To Donald Trump, he's a political weapon 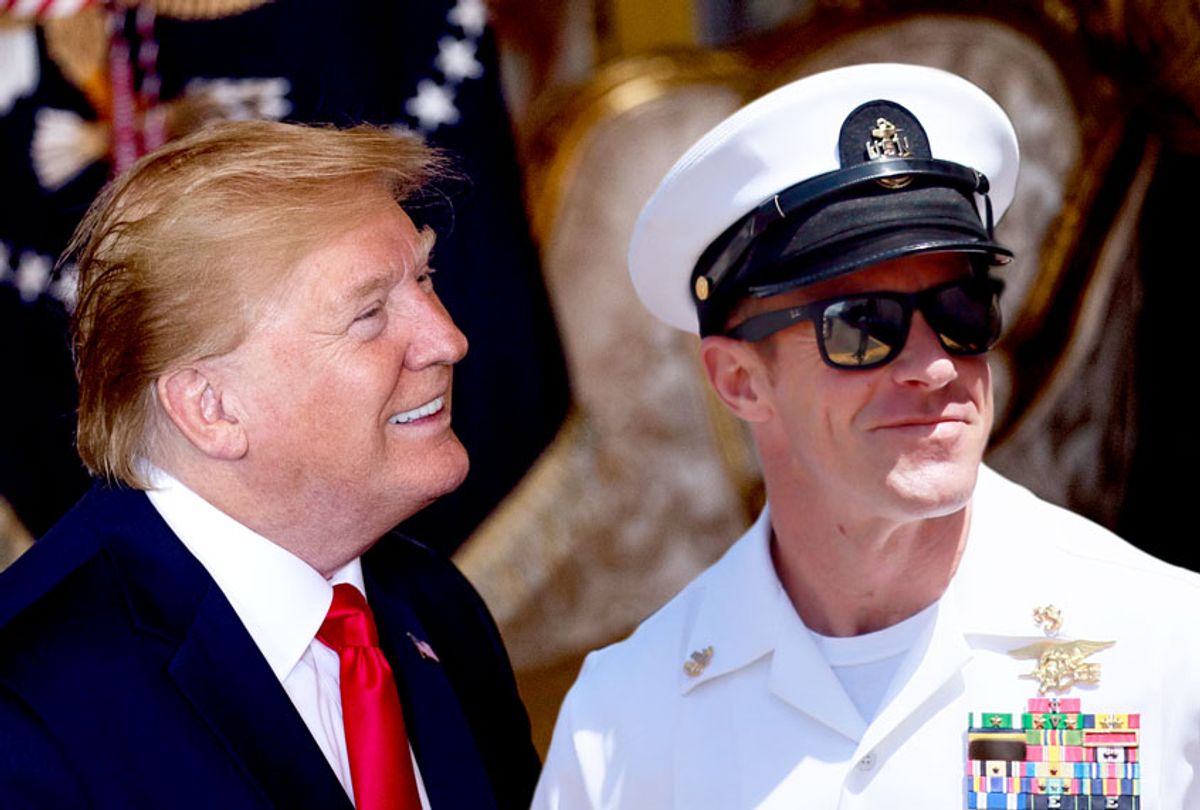 Judging by his Twitter feed and a few appearances before the cameras, President Trump doesn't seem to be enjoying his holiday break down at Mar-a-Lago.  In fact,  his tweeting is so obsessive and downright strange it even has some of his staunchest allies telling him he should put the phone down for a while. It's obvious that the standoff between House Speaker Nancy Pelosi and Senate Majority Leader Mitch McConnell is driving him to distraction. If that was part of Pelosi's plan, it's working.

Nonetheless, as I noted last week, this hasn't stopped the merriment at Trump's commercial resort property. Despite his assertion during the annual Christmas Day phone call to the troops that he works constantly when he's at "the winter White House," he's been playing golf, hosting parties and hobnobbing with pals and paying guests.Among those honored guests was Eddie Gallagher, the former Navy SEAL who was accused of war crimes. The Daily Mail reported on the festivities in detail, including pictures of Gallagher and his wife with the president and first lady as well as Donald Trump Jr. Mrs. Gallagher reportedly gushed, "God bless the Trump family and all they are doing for this country!"

As you probably know, Gallagher was acquitted of murdering an injured ISIS fighter in a controversial military trial. After hearing about the case from Fox News commentator Pete Hegseth and former New York police commissioner Bernard Kerik — a convicted felon and buddy of Rudy Giuliani — Trump took the nearly unprecedented step of interfering in the military justice system and ordering Gallagher released from pre-trial confinement. Despite Gallagher's conviction on a lesser charge, Trump countermanded Navy commanders and restored him to his previous rank, allowing him to keep his SEAL pin, which resulted in the dismissal of Navy Secretary Richard Spencer.

Trump has also pardoned two other members of the military accused or convicted of war crimes, even bringing them up on stage with him at a recent fundraiser. He has reportedly told allies he wants those men to campaign with him next year. We will almost certainly see them at the Republican convention. They are MAGA heroes.

Although Trump campaigned in 2016 by endorsing torture, atrocities and mass executions, even going so far as to proclaim that it was important to "take out the families," it's still shocking that he's openly embracing accused war criminals, calling Gallagher “one of the ultimate fighters” and a "very tough guy."

After the New York Times' explosive story on Gallagher last Friday, in which we saw the original testimony of his fellow SEALs and footage of the moments before the killing of the sedated ISIS fighter, it's almost impossible to wrap your mind around the idea that this man was feted at the "winter White House" just last week.

As the Times reported, this was "the first opportunity outside the courtroom to hear directly from the men of Alpha platoon, SEAL Team 7,"

The culture of the special forces requires a deep sense of loyalty and code of silence. It's clear that the decision to come forward was very difficult, but what they had witnessed had obviously caused them great anguish. Gallagher says these SEALs accused him of all these crimes because they are cowards who were failing in their duties, and he has instructed his lawyer to sue the New York Times reporter who wrote the story. (You can see why he and Trump have formed such a bond.)

These anecdotes are overwhelming and disturbing. Seeing the text messages and the video of the witnesses makes it even more disturbing that Gallagher is still walking the streets, particularly since there is no dispute that he stabbed the sedated teenager:

Gallagher initially tended to the boy. Then according to seven members of the platoon, he stabbed him. One of them, Craig Miller, said he saw blood gush from the boy's jugular, a stream of liquid like the kind that one sees when a baby is "throwing up." Gallagher later texted his friends a photo of the dead boy: "Good story behind this," he wrote. "Got him with my hunting knife."

He was acquitted when one of the accusers, a medic who had been given immunity, explained that he was the one who had actually killed the stabbed teenager by cutting off his air-supply to end his suffering.

Nobody knows exactly what happened, but what with all the high-profile presidential interference and an apparently mishandled prosecution, Gallagher got off the hook. Perhaps that was the correct outcome. The state — in this case, the military — has to prove the case it brings and apparently failed to bring the right one.

But it's impossible to see those videos and read those texts and come away believing that justice was done. Perhaps even more importantly, you can't read that story and believe society is safe with Eddie Gallagher walking free, much less being treated as a hero by the most powerful man on earth.

The military itself has suffered a great wound as well. It would have been bad enough for Gallagher to be acquitted due to poor lawyering. But that's how the system works, and sometimes guilty people get away with murder. But Trump's interference has disrupted a delicate constitutional balance, in which the nonpartisan military is commanded by the civilian president and regulated by the U.S. Congress. As law professor Deborah Pearlstein wrote in the Atlantic:

Watching the president of the United States reward the violation of the most fundamental laws of war, inflaming America’s enemies and alienating America’s allies, was bad enough. But the president’s action appeared to be an intervention in otherwise semi-independent legal and disciplinary processes inside the military — an intervention for the purpose of currying favor with his political base. The pardons — driven by Fox News and reinforced by political rallies — added to the appearance, and reality, that the president regards the military as a tool of partisan politics, not as an institution whose unique constitutional position he has a duty to protect.

The military was the last government institution his ignorance and solipsism hadn't managed to compromise. But he has finally gotten to that as well.