"The Grudge" sequel is cursed by mediocrity

Although Nicolas Pesce has crafted some cool-looking scares and one special moment, the film is pointless recycling 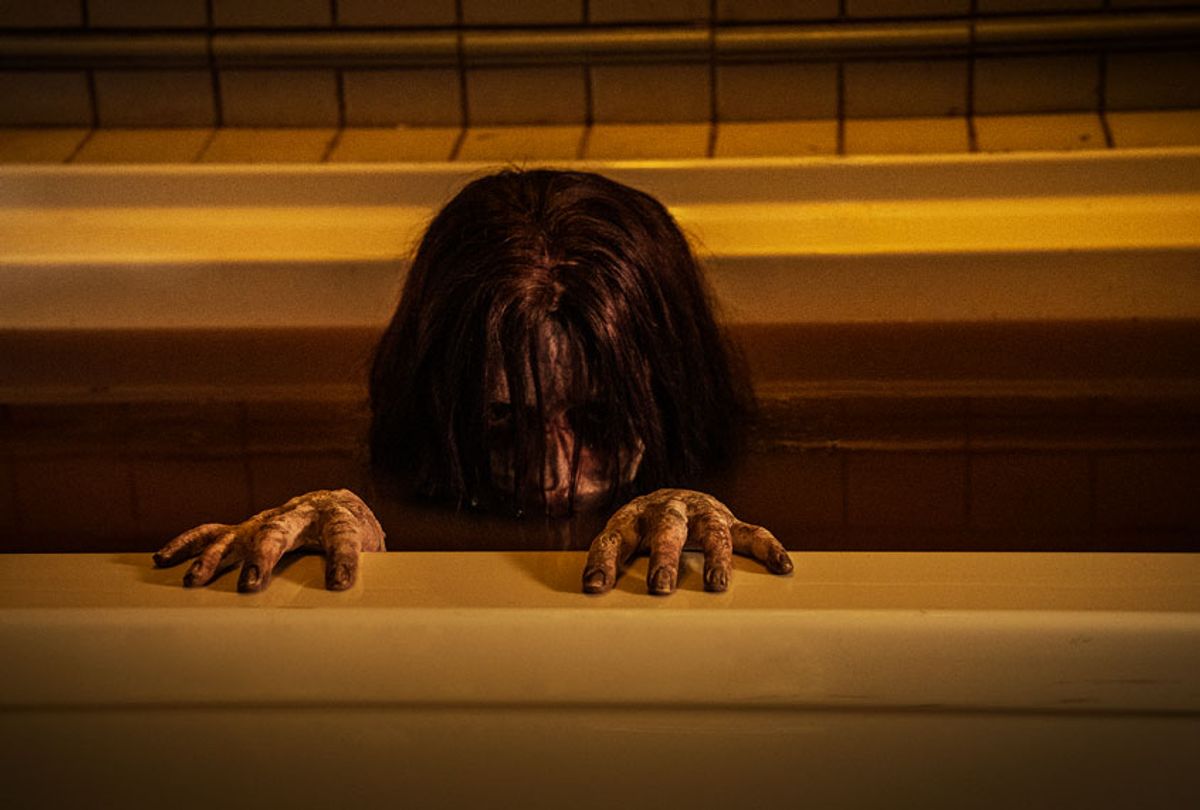 There was one moment in "The Grudge" when the movie, ever so briefly, rose to the level of greatness. William Matheson (Frankie Faison) is talking to euthanasia specialist Lorna Moody (Jacki Weaver) about the ghosts that haunt his house. Matheson explains that, unlike every other character we've met in the American version of this franchise, he isn't scared of the ghoulish specters. Their presence instills him with hope for two reasons: It proves that life doesn't end with death, and it creates an eternal bond between every human being that sets foot on that particular piece of real estate. That connection, he explains, transcends the limitations of time and space, just like death itself. Despite the horror that surrounds him, he can see profundity in it — even beauty.

That monologue evokes the philosophical underpinnings that informed Stanley Kubrick's classic 1980 horror film "The Shining". (He also felt ghost stories were inherently hopeful because they suggested that death doesn't end in oblivion.) Even better, it puts a fresh spin on the non-linear timeline that has been used in all but one of the American "Grudge" films. If the rest of the 2020 film "The Grudge" had been as stirring and thoughtful as that minute-long monologue, it would have been transcendent.

Instead it settles on being merely okay.

Like most of the other films in the series, this version of "The Grudge" contains multiple storylines told in a non-linear fashion. Like a stone dropped into a pond, there is a central act of terrible violence: A woman named Fiona Landers (Tara Westwood) brutally murders her husband Sam (David Lawrence Brown) and daughter Melinda (Zoe Fish) after visiting the house from the 2004 movie "The Grudge." As anyone who has seen that movie understands, that was the house where Takeo Saeki (Takashi Matsuyama) murdered his wife Kayako (Takako Fuji and Aiko Horiuchi in the original trilogy, Junko Bailey here) and son Toshio (Yuya Ozeki) after he suspected the former had been unfaithful to him and the latter witnessed the killing. The rage and grief that motivated his crime caused their spirits to haunt the house and curse anyone who set foot in it to death-by-ghosts. When Fiona returns to her home state of Pennsylvania, she brings the curse with her, and by killing her own family creates a new version of it.

The ripple effects of her violence impact an assortment of characters who wander into the new haunted house, most of them somewhere between two- and three-dimensional in depth: Real estate agents Peter and Nina Spencer (John Cho and Betty Gilpin), who are struggling with the fact that their unborn child is expected to have Adrenoleukodystrophy (ALD); Faith Matheson (Lin Shaye), who is succumbing to dementia while her husband William searches for an escape; Detective Wilson (William Sadler), who alone among the major characters immediately recognizes the hopeless situation that has been thrust upon anyone impacted by the curse; and Detective Muldoon (Andrea Riseborough), who is obsessed with the numerous deaths connected to that house even though her fixation endangers her young son Burke (John J. Hansen).

If you've seen any of the previous "Grudge" movies — from the original Japanese "Ju-On" series to its American spin-off — you know that hauntings, jump scares, and eventual death awaits either most or all of the aforementioned characters. The question is whether the film will establish a creepy atmosphere, produce convincing scares, and manage to be about something deeper than most horror fare. The good news is that the answer to all three questions is yes: Director and writer Nicolas Pesce is gifted at creating subtle moods and then punctuating them with memorable visuals. His scares are well-crafted (even though he relies a bit too heavily on jump scares), and like the 2006 film "The Grudge 2," he even manages to link the suffering in the lives of his characters to the suffering that they will experience at the hands of the ghosts. (While I'm in the minority here, I consider "The Grudge 2" to be the best film in the American version of the series.)

Yet there is something disappointing about this version of "The Grudge." Part of the problem is that one of the most iconic characters of the series — Toshio, the creepy little boy who howls like a house cat  — is absent here. Excising him from the story would be a bit like having a "Saw" movie without Billy the Puppet; he may not be the character who kills you (most of the time), but he is the mascot, so if there is no good reason to cut him out, you should leave him in.

There is also the fact that this version of "The Grudge" brings nothing new to the table. Its one unique gimmick is that it takes place concurrently with the events of the first two "Grudge" movies, but because that timeline has little impact on the story itself, Pesce could have just as easily set it in the present day without changing very much. Aside from that, "The Grudge" follows the same routine we've seen play out in the other films from this series: People enter the haunted house, they get cursed, they either die by jump scare or realize their plight and try to avoid death by jump scare. Aside from the one brief moment of illumination that comes with Faison's monologue, this movie does little to build on or learn from its predecessors. Considering that more than a decade has passed since "The Grudge 3" was released direct to DVD, this feels like a long wait with a decisively unspectacular payoff.

About "The Grudge 3," though: This film is undeniably better than that one. Like all good J-horror, this version of "The Grudge" knows that it should use gore sparingly and instead create psychological scares. While "The Grudge 3" felt like a conventional horror movie that happened to be labeled with the "Grudge" brand, this one, at the very least, feels like a tonal successor to "The Grudge" and "The Grudge 2." It doesn't repeat the mistakes of "The Grudge 3" by ramping up the gore and eliminating the non-linear narrative. What's more, its story doesn't tarnish the franchise's good name or retroactively ruin the previous films. For these things alone, it deserves credit.

Would I recommend it? If you're looking for a competent horror movie, sure. If you want something as good as the first two American "Grudge" movies, no. There was potential here, but it never got fully realized. It's a damn shame.

"The Grudge" releases in theaters on Friday, Jan. 3.