Stumbling toward apocalypse: Trump launches re-election campaign with an assassination

At least Qassem Soleimani knew what he was doing in Iraq. The U.S. military has never had a remote f**king clue 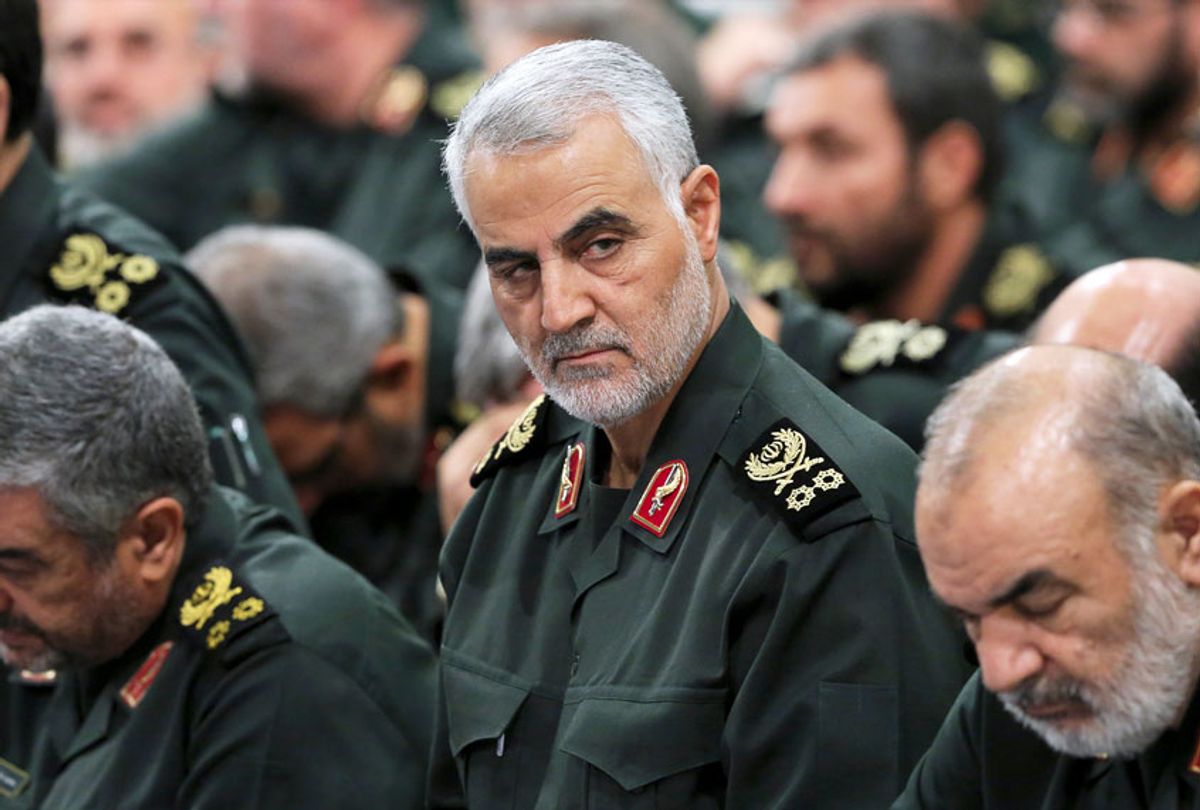 In this Sept. 18, 2016, file photo provided by an official website of the office of the Iranian supreme leader, Revolutionary Guard Gen. Qassem Soleimani, center, attends a meeting in Tehran, Iran. Iraqi TV and three Iraqi officials said Friday, Jan. 3, 2020, that Soleimani, the head of Iran’s elite Quds Force, has been killed in an airstrike at Baghdad’s international airport. (Office of the Iranian Supreme Leader via AP)
--

The minute I saw a map on TV of the place at the Baghdad airport where Maj. Gen. Qassem Soleimani, commander of the  Iranian Revolutionary Guard Corps, was killed in Iraq early Friday morning, I thought to myself: Wait a minute! I’ve been there.

It was the night I flew into Baghdad on a C-130 from Kuwait in November of 2003. The big plane taxied to a stop on the tarmac, and I was picked up along with a couple of other guys by a Humvee. The airport was blacked out. There was no moon, and it was so dark you couldn’t see 10 feet in front of the vehicle. We drove around aimlessly until we ended up on the perimeter road around the airport. We must have made two circuits before the driver figured out where he was and made the turn that took us where we were going.

I had spent almost a week getting there, and I remember thinking, Well, I finally made it to the war in Iraq! We had invaded the country about six months previously, and now the United States Army, backed up by the full might of the American government, was going to find Saddam’s weapons of mass destruction. We were going to prevent any other terrorist attacks on the homeland. We were going to finally put things right in the Middle East. We had spent months moving more than 150,000 troops and all the materiel necessary to support them into Iraq. There was no way we were going to fuck things up. This time we would get it right.

The next morning I woke up to find what appeared to be the entirety of the American military machine stumbling around in a state of utter confusion. Everyone was randomly going places and randomly doing stuff. I would spend the next six weeks accompanying one Army unit after another as they went places and did stuff. We went to the Green Zone. We went from the Green Zone to a Baghdad school where we attended a meeting of what was called a “neighborhood council.” A group of Iraqi men sat around a big conference table drinking tea and arguing about where they would use money provided by the U.S. Army to build new soccer fields. The argument went on for more than three hours without a resolution and broke up with what appeared to be four or five factions screaming at one another. I had to pinch myself to be reminded there was a war going on.

We went out to an armored cavalry unit in the largely Shiite Sadr City neighborhood of Baghdad, where we went on night patrols. We seized AK-47s from passing civilian cars. We broke up fights between gangs of drunken men. We rescued one guy who had been beaten so badly he couldn’t move. A couple of medics patched him up enough that he could be carried away by his friends. We looked for the guys who beat him up but couldn’t find them.

The next day I went back out to the Baghdad airport and drove down the road where Soleimani’s convoy was hit by a drone strike, and I got on a Blackhawk helicopter and flew to Mosul. Almost immediately after arriving, I was on a patrol looking for the killers of a sergeant major and his driver, a 20-year-old corporal, who had been killed the night before. We didn’t find them.

This is how it went for six weeks: stumbling around in the dark in Iraq. Nobody spoke the language. Nobody knew what we were doing. Everybody was just making things up as they went, looking around for something to do and then usually failing when they tried to do it. It was a gigantic clusterfuck, just like Vietnam, complete with the same kinds of heavily defended base camps we had in Vietnam, which were the only place you were even marginally safe — but not really, because the insurgents who didn’t exist could shell you at night with mortars that very definitely did exist.

We didn’t have a Qassem Soleimani in the U.S. Army. He spent the last 22 years in command of Iran’s Revolutionary Guard Corps. He is being accused today, and he will be accused tomorrow, of “having American blood on his hands,” of being responsible for “hundreds of American deaths” because he ran the Iranian outfit that helped to supply the warheads used to set up the IEDs that killed most of the American soldiers who were killed by the Iraqi insurgency that didn’t exist.

We didn’t have any soldiers who stayed for more than a year in Iraq, or in Syria or Afghanistan for that matter. We didn’t have any generals who took command of the same unit for 22 years so they would get very, very good at what they did, and would have a very, very good understanding of where they were and who they were dealing with and what needed to be done and why. What we had was a bunch of soldiers who were assigned to Iraq for a year and then sent home, and an ever-shifting cast of generals who spent a year in Iraq commanding those soldiers who then went home with them. They were replaced by new soldiers and new generals who did the same thing over and over again. They stumbled around Iraq for more than a decade going places and doing stuff. We still have several thousand soldiers in Iraq stumbling around doing stuff.

That’s why we’re still there. Remember the sergeant major and corporal who were killed the day I got to Mosul? The ones whose killers we couldn’t find? Thousands of American soldiers were killed after those two died. And for what? What happened? What changed? Nothing.

A few days after I left Iraq in 2003, Saddam Hussein was found hiding in a hole in his hometown of Tikrit, and a few weeks later, he was hanged. What happened after Saddam was killed? Thousands of American soldiers lost their lives. Tens of thousands of Iraqis were killed. And for what? What happened after the loss of all those lives? Nothing.

Now Donald Trump has ordered the killing of yet another enemy of the United States. This time, the people who pulled the triggers that fired the rockets that killed Soleimani weren’t even in Iraq. They were probably sitting at a console in some Air Force base in the United States, and when they were finished killing the commander of the Iranian Revolutionary Guard, they went home.

Donald Trump woke up on Thursday, and for the first time since he began his vacation at Mar-a-Lago, he skipped playing golf and ordered the death of an Iranian general officer. We should hope and pray that he plays more golf. Maybe fewer people will die.