From "Russian Doll" to "Fleabag," the shows that made an impact in 2019 were the ones we needed most 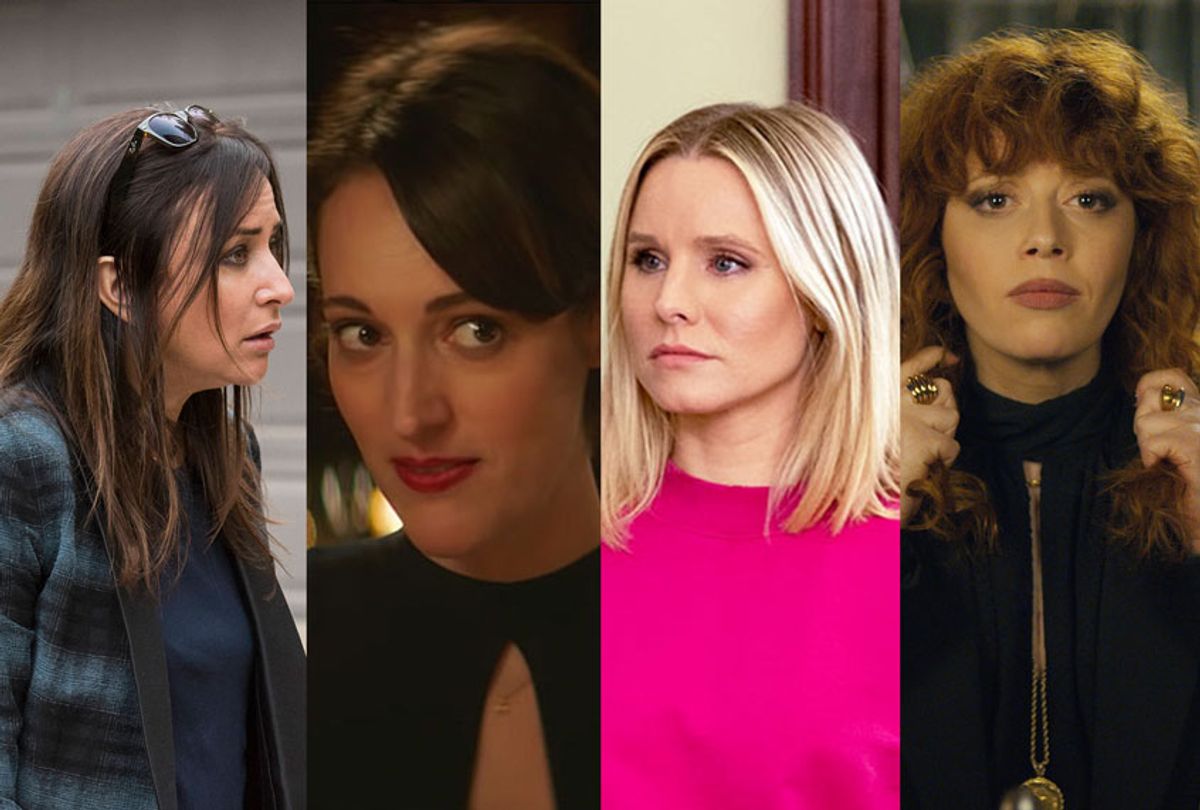 Months before Dictionary.com made "existential" its Word of the Year for 2019, television was already obsessing over meaning and audiences were picking up on it. Netflix dropped “Russian Doll” early in the year and soon after, the enthusiastic chatter about its narrative mystery, its defiance of description and heady hopeful themes spiraled outward into the world.

For a while, Natasha Lyonne’s optimistic, magical series was all anyone could talk about. Until, that is, we got an eyeful of the second and final season of Amazon's “Fleabag,” in which Phoebe Waller-Bridge’s character sought to atone for her sins by abstaining from sex for a year, eating clean and exercising religiously. Her reward? Finding real, honest, beautifully true love with . . . a Hot Priest.

Before and after these series moved us to grapple with the big questions, NBC’s “The Good Place” waxed philosophical before, in the first half of its finale run, proposing a simple answer: that there is no answer.

Meanwhile FX’s “Better Things” floated its own suggestion. Instead of searching for a concrete reason for it all, one should consider resting in the feeling of being alive and loved and OK. In defying the standard urge to construct season arcs and linear narratives with each episode, Pamela Adlon’s series welcomes us into life – a family’s life, and the lives of the families and friends they embrace.  The simple, irritating, glorious, love-filled beauty of existence, in the world of Sam Fox, is the story. Whatever it is that day. Whatever shape it takes in the moment.

For many years, dismissing television as junk was fashionable, socially correct ,and indicative of one’s commitment to loftier artistic and intellectual pursuits. Film, for instance.

This was before the Golden Age of Television, and the Platinum Age, Peak TV and whatever we’ll call this new era of the Streaming Wars. Most problems people used to have with television are still evident today. There’s still a lot of valueless, brain-deadening junk on the schedule along with a fathoms-deep ocean of mediocrity.

There’s also more illuminating, idiosyncratic, inspiring, artistically experimental and philosophically adventurous content that makes us feel more human available now than perhaps there has ever been.

Existentialist themes in our shows invite us on an alternate journey to the typical one offered by TV. People who call it a waste are talking about the series that numb us, that give us a means of escape without offering much in the way of intellectual nourishment in return. But the shows mentioned above ask the audience to tune in not merely to the mechanism but to the message, its moral and its spiritual marrow.

Every decade is marked by its series that define who we were and are at any given moment, certainly. The ratings indicate one story, probably the easiest one there is. If our most popular entertainment tells future generations something about who we are, that story is somewhat average and depressing. We’re still in love with the predictable and the distracting.

But it's telling that few details from any of these shows have stuck with us as stubbornly as, say, the magical few minutes in which Stephen Colbert and Anderson Cooper transformed what was expected to be a simple sit-down between two famous hosts into a warm, comforting dive into the mystery of life and the gift of . . . suffering.

The exchange that went viral from that August interview starts, unexpectedly, with the normally unflappable Cooper dropping his façade as he speaks with “The Late Show” host about their shared losses. Colbert, the youngest of 11 children, lost his father and two of his brothers in a 1974 plane crash.

Cooper’s mourning is still fresh – his mother Gloria Vanderbilt died in June of 2019, only two months before their conversation aired. After revealing that Colbert wrote him a letter expressing his sympathy, Cooper then looks down, presumably to read a quote he says Colbert told another interviewer that he had learned to love the thing he most wished had not happened. It’s only in the middle of his question that you realize he’s doing his best not to break.

Cooper pauses and quietly chokes back tears as he says, “You went on to say, ‘What punishments of God are not gifts?’ Do you really believe that?”

There’s a moment between the interviewer’s question and the subject’s answer in which, wherever one may be watching the clip, the air grows still. Colbert kindly smiles and tells him, “Yes.”

Remember, this too is TV. Not only that, this is a cable news moment we’re referencing, a moment in a year where cable news has been derelict in its duties on so many fronts, so many times, enough to make a person simply throw up their hands and give up.

And then a passage like this occurs, one in which two people sit down, unmask, and remind us that we’re all so very human after all. What do we get from loss, Colbert asks? Then he answers so delicately and with such care:  You get awareness of other people’s loss, “which allows you to love more deeply and to understand what it’s like to be a human being, if it’s true that all humans suffer.”

This is Colbert, king of late night, unsparing master of punching upward at our corrupt and dangerous leaders with jokes, and he’s being serious. Not deadly serious however —he infuses it with affirmation. What’s the point of existing, he says, and being human if you can’t be the most human you can be? “I want to be the most human I can be, and that involves acknowledging and ultimately being grateful for the things that I wish didn’t happen, because they gave me a gift.”

Such realizations misted all around us in scripts we couldn’t forget or stop quoting. “Russian Doll” resolves its “Groundhog Day”- style weirdness by boiling down the mystical connection of Alan and Nadia, two strangers who figure out that they have to give each other a reason to live to stop dying over and over again, to a fairy tale of "The Broken Man and The Lady with a Death Wish.”

“You see, life was too painful. Or they were too fragile,” Nadia tells Alan. “But either way you slice it, they just couldn’t hack it. And then one day something miraculous happened: they made it through alive.”

It was in the crowning epiphany of “Fleabag,” in which Waller-Bridge’s Fleabag and her Hot Priest, played by Andrew Scott, finally acknowledge that they are in love, truly in love, and succumb to what that entails. One time.

By the laws of man and the church, it is absolutely the wrong thing to do. But the laws of existence have an entirely different rule book.

“So,” he concludes, “no wonder it’s something we don’t want to do on our own.”

A word of the year can be simply that, I guess. But the emotions, anxiety, despair, and hope that led us to search for definitions and reason don’t observe a calendar or a time frame. Our existentialist yearnings have surely carried over in  2020, and given how frightening the world became within hours of the new decade’s dawning, we may be questioning what it’s all for and searching for answers more frantically than ever.

Fortunately television also has fresh, thought-provoking balm on the way. “Fleabag” may be finished, but a second season of “Russian Doll” is on deck for 2020, and a new season of “Better Things” is due in the spring.

“The Good Place” returns for its very last episodes at 8:30 p.m. on Thursday, Jan. 9 on NBC – and right around the time it finishes brings the premiere of “Dispatches from Elsewhere,” an anthology series from Jason Segel  that, according to the official description, is “centered around four ordinary people who feel there’s something missing in their lives, but they can’t quite put their finger on what it is.”

So they’re searching . . . but aren’t we all? And as each of these series tells us, we may not find any solid answers. A defining exchange in “Russian Doll” sums it up nicely, as Alan asks Nadia if she promises he’ll be happy if he doesn’t leap off his building’s rooftop as he planned in his lowest moment.

Nadia replies, “No, man! Absolutely not. But I can promise you that you will not be alone.” Right now, that’s all any of us can ask out of life . . . and each other.