What's new on Netflix in January, from a "Ghost Bride" and RuPaul to BoJack's last ride

Start off the new year with a calorie-free binges of cheerleaders, vampires, dead husbands, and fashion competition 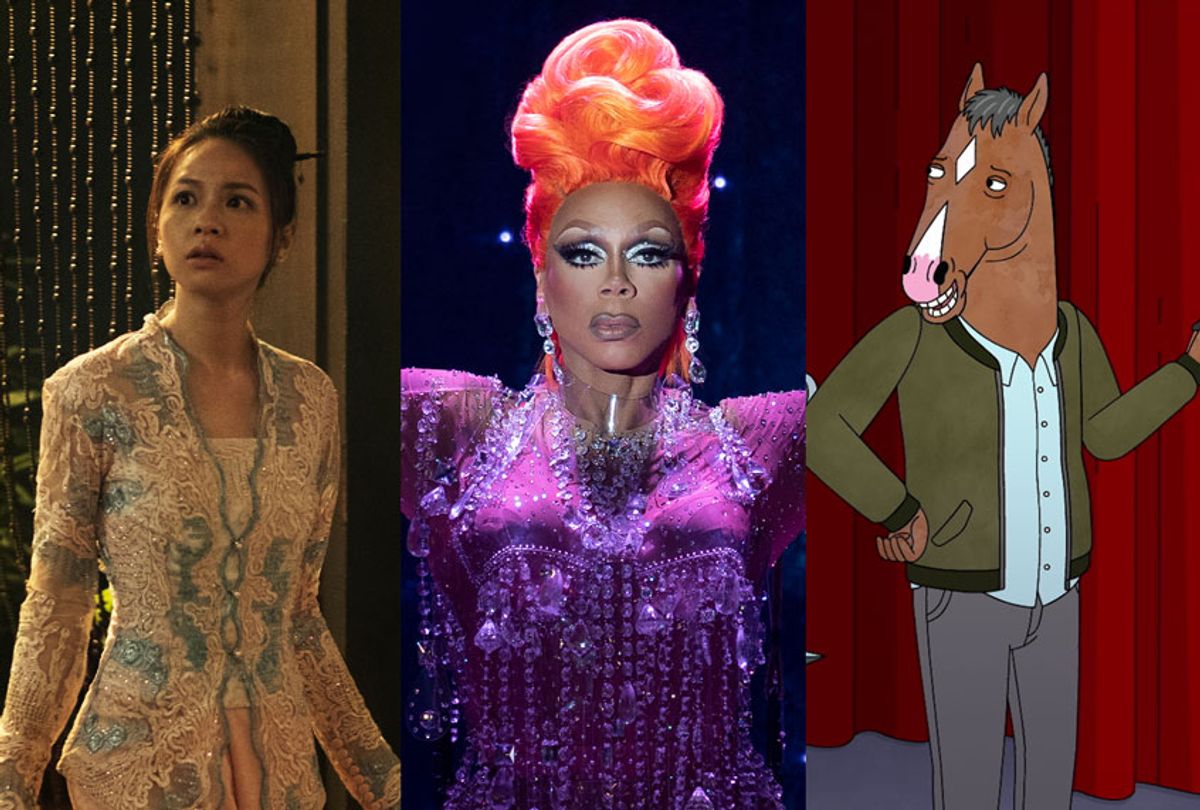 The Ghost Bride, AJ & The Queen, and BoJack Horseman (Netflix)
--

This month on Netflix brings the end of some of our favorite characters' stories, like BoJack Horseman and  Anne of Green Gables. But in true new year fashion, these endings bring the opportunity for new narratives led by intriguing new characters, ranging from RuPaul as a down-on-her-luck drag queen, a "ghost bride," and even Tan France — who is stepping outside his role within the Fab Five to host a new fashion reality series.

If Jesus Christ returned to earth in 2020, what would happen? Would he unite the masses or the already-divided population or continue to splinter apart? Would he be regarded as a god, a cult leader, a terrorist or an antichrist? How would social media — especially the prevalence of “fake news” and deep fakes — impact the spread of his message?

These are the questions asked and partially answered in this new thriller, which also doubles as a contemplation on isolation, from series creator Michael Petroni (“The Book Thief”).  "Messiah" stars Michelle Monaghan and Mehdi Dehbi, among a large ensemble cast, and can boast Mark Burnett and Roma Downey as executive producers.

“Nisman: The Prosecutor, the President, and the Spy,” Jan. 1

In 1994, 85 people died in a bombing at the Asociación Mutual Israelita Argentina, or AMIA. The attack on the Buenos Aires Jewish community center was the largest terrorist attack in the Western hemisphere until 9/11. Prosecutor Alberto Nisman investigated the attack, and potential ties to government corruption, for nearly two decades, before he was found dead in his apartment the day before he was to reveal his findings. Initial media reports suggested it was suicide, but as this true crime series suggests, this situation may have been more sinister.

As I wrote in my review of the series, “‘Sex, Explained’ excels in finding a voice that is smarter than it is steamy, which isn’t a surprise if you’ve watched the 'Explained' Netflix series that preceded it.” This five-episode series, which is narrated by Janelle Monae, uses a video essay format rich in animation and expert voices to examine sexual fantasies, attraction, fertility, birth control and childbirth.

Many of the episodes are guided by a seemingly simple question or two, like “How do I know if I’m attracted to someone?” or “We invented hormonal birth control over 60 years ago — shouldn’t it be better by now?” as a way to get in-depth about the physiology of human “chemistry” and the history and future of contraception.

The third and final season of “Anne With an E” closes the door on Avonlea, a community that conceived by Moira Walley-Beckett, is notably wider and more diverse than L.M. Montgomery’s original version. Through the lens of the beloved, empathetic main character, we come to meet a variety of new characters — including LGBTQ and people of color, characters that are often woefully underrepresented in period television — alongside old favorites like Marilla and Gilbert Blythe.

Steven Moffat and Mark Gatiss do for the titular count what they did for “Sherlock,” infusing new life into a story we all think we know. This blood-soaked version of “Dracula” is told in three 90-minute episodes, which originally premiered on the BBC, and has garnered praise from critics like The Gaurdian’s Lucy Mangan who described it as a “bloodstained love letter to a classic, beautifully and delicately scented with just the faintest hint of ham gothic yarns need.” Check out Salon TV Critic Melanie McFarland's less excited review.

The creators of "Last Chance U," which provided insight into the community college football experience, now turn to those who are on the sidelines. “Cheer” follows the competitive cheerleaders of Navarro College in Corsicana, Texas. Led by powerhouse coach Monica Aldama, the small junior college has won an unprecedented 14 National Championships since 2000. While the series showcases its team’s training and competitive nature, what really makes “Cheer” stand out are the personal stories of triumph.

Drag queen Ruby Red (RuPaul) has made a name for herself — and amassed a small fortune — as a performer. But when Ruby’s dreams of opening a club of her own are dashed, she begins traveling across the country in a rundown RV and meets an unlikely sidekick along the way: AJ, a tough-talking 10-year-old. This series promises feel-good moments and spice that bring to mind other Netflix-original content like “Dumplin.’”

We’ve come a long way since Season 1 of “Grace and Frankie,” which started with the bombshell revelation that the title characters’ husbands (played by Martin Sheen and Sam Waterston) are gay and plan on leaving their wives (Jane Fonda and Lily Tomlin) for each other.

The trailer for this season, which is the penultimate, teases complications in Grace’s new marriage, toilet humor, and some heavy drinking.

Aiming to become part of Amsterdam's elite, an ambitious college student joins an exclusive society, unaware that it's hiding a horrifying secret. This Dutch horror series spans eight episodes and — with its mention of being a society for “people with potential” and shots of members being branded — has real NXIVM vibes.

As Salon’s Melanie McFarland wrote of Season 1 of “Sex Education,” a witty — if slightly wry — British coming-of-age series, “human nature and sexual urges always find a way to circumvent rules and politics, though. Here, at last, is a series that doesn’t play that notion as a matter of tragedy or titillation, but a starting point for exploration, both physical and emotional.”

The show follows as a group of teens as they figure out all the problems associated sex and sexuality; they are led by Otis (Asa Butterfield), whose mother (Gillian Anderson) is a therapist who at home is very casual about the topic of intercourse.

Per Netflix, Season 2 comes with its own special challenges for the students: “Moordale Secondary is in the throes of a chlamydia outbreak, highlighting the need for better sex education at the school, and new kids come to town who will challenge the status quo.”

In this standup special, Fortune Feimster — known for her work on “Last Comic Standing” and in her role as Colette on “The Mindy Project” —  takes the stage and riffs on her southern roots, sexual awakenings, career in show business, and more.

Based on the New York Times bestseller of the same name, this adaptation by Yangsze Choo is set in 1890s Colonial Malacca.

Li Lan has been offered a marriage proposal from the wealthy Lim Family to become the “ghost bride” to their recently deceased son. In exchange for financial protection for her family, she’ll spend the rest of her life haunted by the Lim family’s son. Soon, Li becomes wrapped up in solving a murder mystery that eventually points her to other-wordly affairs much bigger than she ever imagined.

Hosted by “Queer Eye” fashion expert Tan France and model Alexa Chung, “Next in Fashion” features 18 designers who face challenges centering on a different trend or design style that has influenced the way the entire world dresses. The ultimate prize is  $250,000 and an opportunity to debut their collection with luxury fashion retailer Net-a-Porter.

In a future where each citizen is monitored 24/7 by a drone, a woman discovers a murder unaccounted by this surveillance system, and investigates why in this Brazillian science-fiction thriller series. By the same producer as the breakout sci-fi hit "3%," this new series could prove to be your next bingeworthy obsession.

Using new technology to better film at night, “Night on Earth” reveals the hidden lives of nocturnal creatures, from lions on the hunt to bats, in this fascinating new nature docuseries.

It’s time for BoJack to ride into the sunset in the final episodes of the series. Season 6, Part A left on a cliffhanger, as a pair of reporters have started digging up clues about some of BoJack’s worst moments, including the time he kissed his childhood friend’s daughter and the death of Sarah Lynn, his old “Horsin’ Around” co-star.

Meanwhile, Princess Carolyn is adjusting to being a single mother, while Mr. Peanutbutter has revealed that he cheated on his fiancee. It seems this final season will be all about seeking — and hopefully finding — closure for these characters.

Here is everything coming to the platform this month:

“Anne with an E: The Final Season”
“All the Freckles in the World”

“The Healing Powers of Dude”

“Kipo and the Age of Wonderbeasts”
“The Master”

“Pandemic: How to Prevent an Outbreak”
“Playing with Fire" Season 1

“A Sun”
“Chilling Adventures of Sabrina" Part 3
“The Ranch: The Final Season”
“Rise of Empires: Ottoman”

“Country Strong”
“We Are Your Friends”

“Frères Ennemis”
“Next In Fashion”
“Night on Earth”
“Omniscient”