Getting played and exposed by Kim Jong-un wasn't enough. Now Trump will allow the Iranian regime to eat his lunch 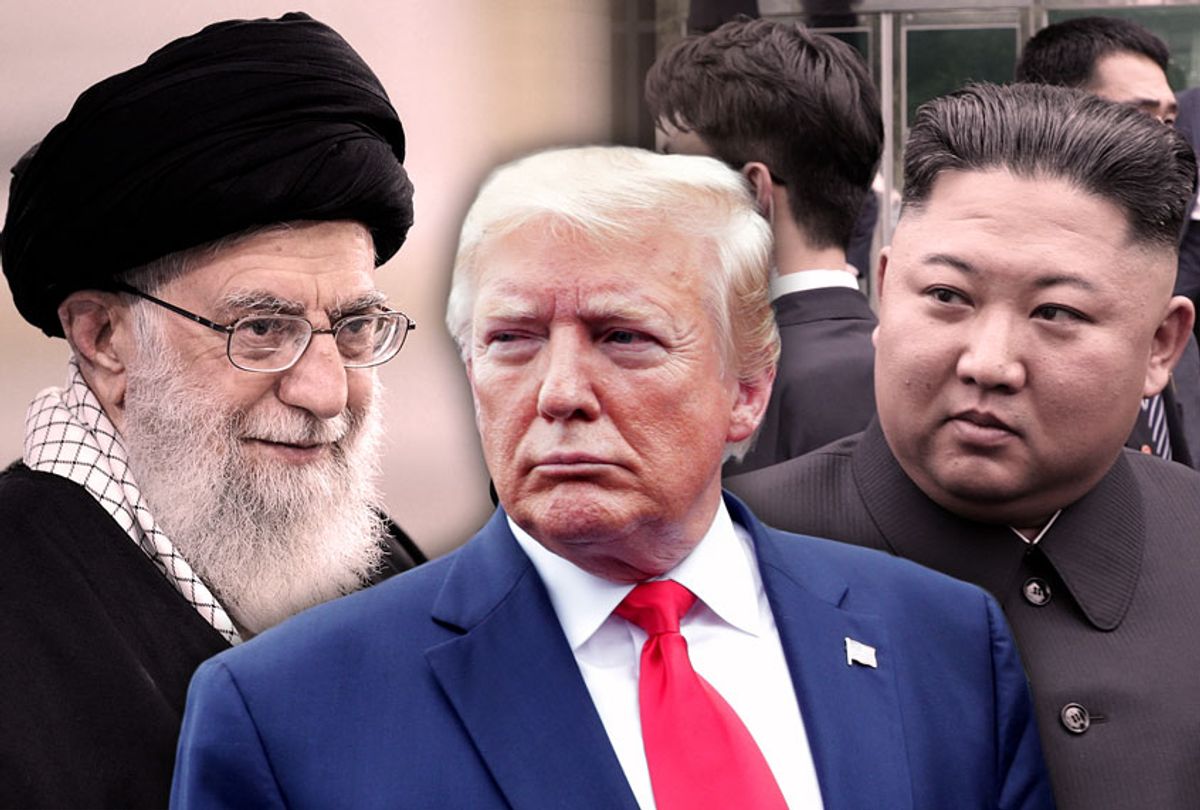 Niccolò Machiavelli wrote in 1517 that it’s "a very wise thing to simulate madness." In other words, behaving like an unpredictable, bug-eyed maniac might scare enemies enough to force them to back down.

Whether intentional or a simulation, plenty of despots and strongmen since then have engaged in this “madman theory,” too often with terrifying consequences. More recently, Richard Nixon gave it whirl when confronting the Soviet Union and its satellites, telegraphing an irrational anything-goes approach intended to scare the Kremlin into submission.

Given Nixon’s precedent, it makes perfect sense that Donald Trump would take a stab at recycling this dangerously high-stakes foreign policy approach when he knee-jerked his way into nuclear brinksmanship with North Korea in 2017. Trump’s “fire and fury” threatgasms directed at Kim Jong-un somehow evolved into several masturbatory summit meetings with the murderous dictator (I mean Kim, not Trump), which ultimately led to nowhere, with Kim calling Trump’s bluff and resuming his nuclear program, making Trump look like the impotent sucker he is while embarrassing the United States. I doubt that was all part of Trump’s plan.

Contrary to his desperate spin on the topic, Trump’s version of the madman theory failed miserably. North Korea is nothing if not emboldened by Trump’s ungainly experiment in statecraft cosplay. Kim played the president like a fiddle, diminishing America’s moral authority as well as our international street cred.

The lesson? If you’re an isolated foreign leader who’s provoking the United States, Donald Trump will threaten “fire and fury” only to back down as soon as you coquettishly smile in his direction, elevating and empowering your leadership by duping the American president into appearing for summits and joint photo ops, and ultimately allowing you to resume the aforementioned provocations with all new authority.

Trump never learned that lesson. Neither he nor his Red Hat disciples are bright enough to grasp that his North Korea gambit was a colossal foreign policy blunder, with negative ramifications not only on the Korean peninsula but around the world. This lesson-not-learned is precisely why Trump is resurrecting the madman theory with Iran.

Yes, because it worked out so well with North Korea, Trump is defining insanity by repeating the madman theory, this time with Iran, not fully comprehending the vast cultural, religious and political differences between the two so-called “Axis of Evil” nations. He’s not nearly shrewd enough to realize this will fail again, but in a completely different way.

The madman theory explains Trump’s disturbingly sanguine threats since the military killing of Islamic Revolutionary Guard Gen. Qassem Soleimani in Baghdad last week. Not only has Trump threatened to commit war crimes by suggesting he’d authorize military strikes against cultural sites in Iran, he has also tweeted about “disproportionate” responses to any further Iranian aggression and, in one of his most psychotic moments ever, announced that he “doesn’t do exit strategies.” Talking about repeating mistakes. Oh, and when asked whether he’s concerned about American casualties in the escalation, Trump responded, “If it happens, it happens.” In other words, the commander in chief responded to the notion of dead Americans, soldiers and citizens, by basically saying shit happens. Hell, even Donald Trump Jr. took a break from mutilating and murdering exotic animals to join his dad in the madman game, showing off a machine gun with an emblem from the Crusades carved into the side.

All this screeching by the president has been hamfistedly yanked directly from the madman playbook. The problem, however, is that Trump is mentally incapable of handling the chaos he’s manifesting should Iran ignore his frenetic bellicosity and proceed with its red-flagged threats of war.

It’s true that previous commanders in chief, including Barack Obama, have engaged in assassinations against bad actors and enemy leaders alike, but most if not all of those presidents displayed at least a modest capacity to handle the aftermath, or were surrounded by cooler heads who knew what was appropriate and what was suicide. There’s none of that in the current White House. It’s just Trump — the poseur who once needed three tries to accurately spell “hereby.”

Not only has Trump alienated and fired most of the alleged “wise men” from his administration, but it’s an understatement to observe that he simply doesn’t possess the aptitude to find Tehran on a map, much less the smarts to understand the vast sectarian nuances of the broader Middle East. We’re talking about an incompetent, emotionally unstable reality-show clown who has defended Nazis as “very fine people,” traded arms for foreign election interference and reportedly wanted to nuke hurricanes (which he calls "water dumps"). Knowing this, does anyone who’s not brainwashed by Fox News seriously believe that the man who wanted to buy Greenland on a whim understands the most basic of concepts here — the differences between Shia and Sunni, for example? Of course not.

I believe him when he says there’s no exit strategy in all this. Indeed, there’s no strategy at all, only madness and the wholesale rejection of American values. As Jonathan Chait wrote in New York magazine, Trump is deliberately adopting the behavior of our enemies, believing that in order to win, he must act like them.

Trump has long dismissed respect for human rights, international law and innocent life as a form of political correctness. During the 2016 campaign, he promised to kill the families of terrorists, steal oil from countries the U.S. invades and restore torture. “Don’t tell me it doesn’t work — torture works,” Trump said in 2016. “Okay, folks? Torture — you know, half these guys [say]: ‘Torture doesn’t work.’ Believe me, it works. Okay?”

But does he understand where this approach will lead us? Not a chance in hell. As long as 44 percent of American voters are sufficiently fooled into believing the ensuing chaos is someone else’s fault, it’s a win for him no matter how large the body count gets. One thing everyone can agree on: Trump isn’t a long-gamer. He’s transactional. Short-term wins, whether they’re actual wins or not, are what interests him. As far as he’s concerned, he’ll be out of office and long dead while we’re still dealing with the long-term blowback from his making-it-up-as-he-goes Middle East adventurism. Iran, ultimately, will be someone else’s problem.

This isn’t as much about the Soleimani killing as it is about the incompetence of the president who ordered it — it’s about what happens next, as well as what happens 10 moves down the line. Are we really prepared for Trump’s handling of the escalation three, four or five attacks and counterattacks from where we are today? Not only are we unprepared for the military ramifications of all this, we’re definitely not prepared for the Shia freelancers who could turn up with car bombs at outdoor markets — suicide bombers at nightclubs and other population centers, on American soil or elsewhere. How does Trump react to something like that? Either he’ll chicken out, or he’ll react in ways that’ll make Dick Cheney’s war crimes look like a Marianne Williamson lifestyle brand.

Trump’s Iran plot will end badly, if it ends at all.

The madman theory is only as effective as the aptitude of the leader who’s playing such a perilous game — a leader savvy enough to recognize when the madman thing is played out. But there’s no off position on Trump’s madman switch. He’s wired to be a slow-on-the-uptake kaiju monster, a generalissimo-style strongman, howling and stomping when he should be thinking and strategizing with experts. Trump’s actions aren’t the moves of a “very stable genius,” but rather the impulses of a lumbering klutz who talks a big game to mask his small thinking. And we’re all standing too close to the Trump propeller as its screws loosen.