Having antiwar déjà vu? That's understandable, but it's not 2003 anymore

In 2003 the antiwar movement was marginalized, despite being right. But opponents of war with Iran have a voice 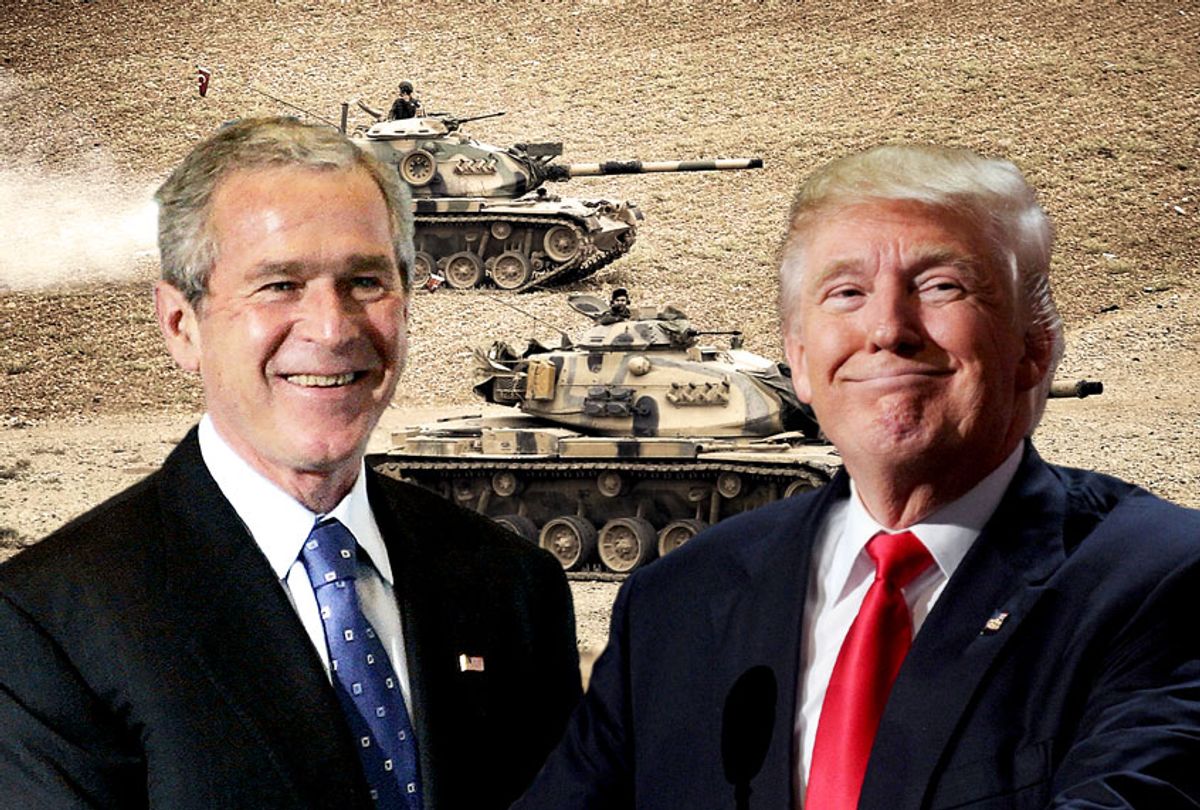 As the 2020s kick off, there is much reason to despair. Donald Trump is doing what many of us feared he would, rushing the U.S. into possible war with Iran with an impulsive decision to assassinate Iranian Maj. Gen. Qassem Soleimani. Understandably, many of us are having flashbacks to 2002 and 2003, when the George W. Bush administration was rushing into a disastrous war with Iraq, based on false evidence.

The parallels are, admittedly, uncanny: An administration that is shamelessly lying to bamboozle the public into supporting the war. Neocons fanning out over cable news, arguing against all common sense (and all available evidence) that the citizens of a sovereign Middle East nation will applaud our military assault on them. A war effort spearheaded by a bunch of overconfident dummies who seem to think this whole thing will be a breeze, when it's all too likely to be a disaster. A media that, all too often, lets lying administration officials go unchallenged when they flog their lies.

Those who were too young to vote in 2003 might not remember, but the gaslighting of war opponents back then was so out of control that even those of us who lived through it struggle sometimes to believe it was as bad as it was. Those who were openly skeptical of the Bush administration's lies about Saddam Hussein's supposed weapons of mass destruction were accused of being traitors and of supporting terrorists. Bush and his minions and supporters shamelessly exploited people's genuine fears after the 9/11 attacks to persuade Americans that Saddam, who had nothing to do with 9/11 and was not friendly with al-Qaida, was coming to kill us all.

This was an era when the Dixie Chicks became pariahs in country music because the group's lead singer made a stray comment opposing the war. There was literally an effort to rename French fries as "freedom fries" to somehow punish the nation of France for, correctly, not backing the war effort. The New York Times credulously published Bush-friendly propaganda supporting the war. The Washington Post, as well, backed the administration's lies and the rush to war.

Being a war skeptic felt like a lonely position in 2003, even though the big anti-war protests of February that year were the largest in history (and only bettered recently by the Women's March of 2017). Because of this propaganda push, nearly three-quarters of Americans supported the invasion of Iraq in March of 2003. I personally knew a lot of people who, while not fans of Bush, believed his lies and thought I was crazy to oppose the war. In the face of this political pressure, a distressing number of Democrats went along with the war — 81 out of 208 House Democrats and 29 out of 50 Senate Democrats voted to authorize the war in Iraq.

Things could still change, but right now, I'm not seeing anything like that happening now. Yes, there are the same neocon morons out there making the same moronic arguments. Yes, the same sleazy D.C. pundits are trying the same lying-and-shaming tactics in order to intimidate Democrats out of opposing the war.

But so far, the attempts at gaslighting and intimidating war opponents into silence just isn't working. In 2003, Bush administration officials, however little they deserved it, got the benefit of the doubt and were treated as credible, honest actors. Few people in media that aren't just paid shills for the Trump administration, however, believe Trump and his aides are anything but liars. While their obvious lies aren't being challenged nearly enough, it's safe to say that the equation is much different now, with war skeptics having more, if not most, of the credibility in the media and war proponents being held at arm's length.

The editorial boards of both the New York Times and the Washington Post have questioned Trump's story and his judgment in ordering the Soleimani killing, suggesting that the president is doing this to distract from impeachment and denouncing him for his bombast and his willingness to threaten war crimes. Mainstream journalists like Brian Stelter and Jake Tapper of CNN  have been unafraid to point out that the Trump administration is full of dishonest actors, and to suggest that their justifications for this assassination are just more lies. Rather than trying to bolster the administration's lies, as in 2003, the New York Times is reporting that military advisers offered the option of killing Soleimani to Trump only because they didn't think he'd be stupid enough to take it.

Public polling hasn't been updated since Soleimani's killing, but polls from the fall suggested that Americans aren't falling for Trump's lies, that the public is wary of going to war, and that they  blame Trump for escalating the situation with Iran. Despite the range of approaches and tones that leading Democrats might take regarding the Iran situation, belief that Trump is screwing this up and that the rush to war is a terrible idea is unifying the Democratic Party. Instead of getting wobbly and flirting with the idea of supporting Trump, as far too many did with Bush in 2003, Democrats are at least trying to limit Trump's power to escalate the conflict with Iran.

Things are terrible and stressful right now, so there is an understandable  temptation to live in the space of catastrophic thinking: Nothing will ever get better and people never learn. But we cannot afford to let despair take over right now. That will only fuel more inaction and allows the minority of Americans who support Trump to win by default.

Even though the price paid in Iraq was far too dear, the lessons of that war have not entirely been forgotten. Democrats, journalists and the public at large, at least so far, all seem not to be so damn gullible this time around. (It helps that Trump is an even more shameless liar than Bush was.) Whatever Trump does, he'll have to do it without the support system that Bush was able to create through a combination of lies and bullying. War opponents have a real voice, real credibility and real power. That may not be enough to prevent catastrophe, but there's still a chance that reason may prevail. That's more than we can say when we look back at 2003.