"The only ones that are mourning the loss of Soleimani are our Democrat leadership," Haley lied to Sean Hannity 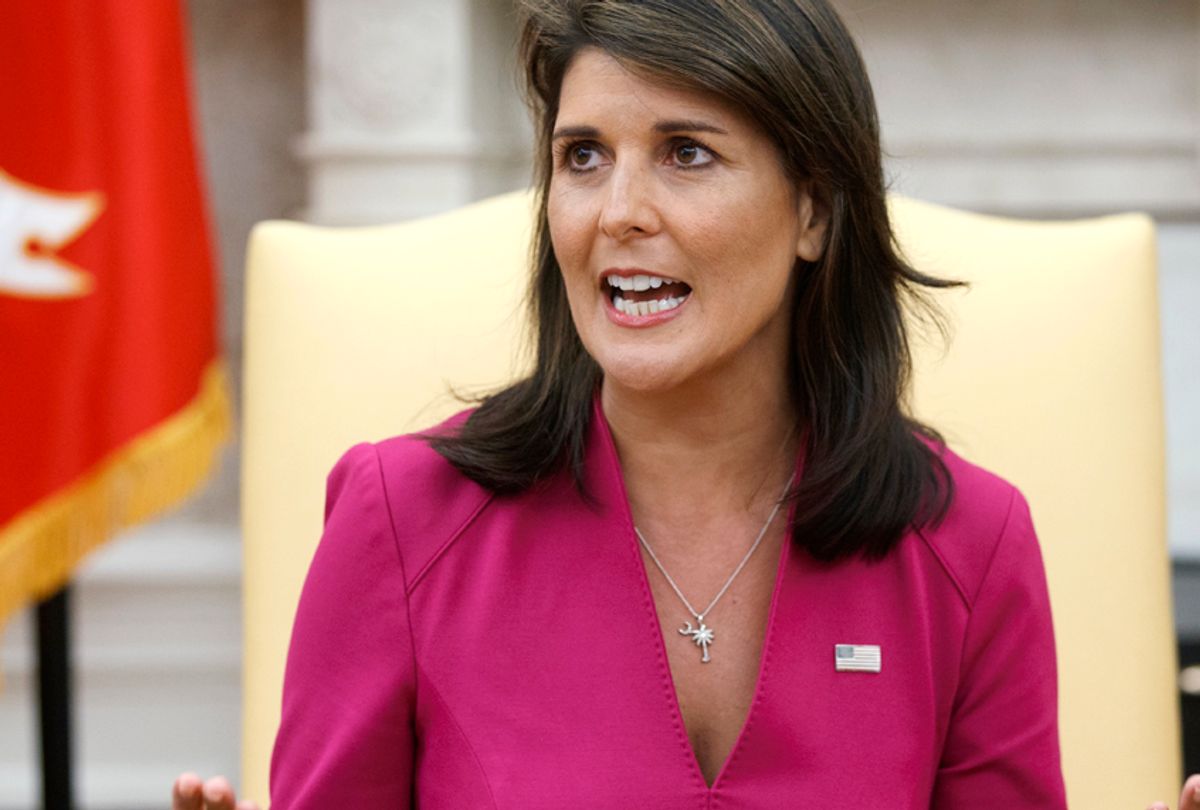 Former Ambassador to the United Nations Nikki Haley falsely claimed to Fox News host Sean Hannity on Monday that Democrats were “mourning” the assassination of Iranian General Qassem Soleimani — and they were the only ones doing so.

David Frum of The Atlantic tweeted that “when Nikki Haley falsely said that only Democratic presidential candidates mourned the death of Soleimani, she forgot to mention somebody of whom her statement was true …”

Frum was referring to Sen. Rand Paul of Kentucky, one of Trump’s most prominent Republican supporters, who told CNN’s Wolf Blitzer on Monday that “you would have to be brain dead to believe that we tear up the agreement, we put an embargo on you and we kill your major general. And they're just going to crawl back to the table and say, 'What do you want, America?’”

Political activist Bree Newsome Bass, who removed the Confederate flag from the South Carolina state house grounds in 2015 after the Charleston church shooting (which happened while Haley was governor of that state), tweeted that the Republican politician  “is violent & shouldn't be elevated to positions of power. She's willing to do whatever is politically expedient at a given point in time, incl. pandering to right wing extremists & making knowingly false statements b/c she never genuinely cares about the consequences.”

Haley was also spinning her own alternative facts when she falsely claimed that Russia did not have a problem with the attack. Russian Foreign Minister Sergey Lavrov responded to the assassination by saying that Soleimani's death "grossly violates international law."

"The targeted actions of a U.N. member state to eliminate officials of another U.N. member state, moreover, on the territory of a third sovereign state without its knowledge, flagrantly violate the principles of international law and deserve condemnation," he continued.

Chinese Foreign Minister Wang Yi similarly said after the assassination that China would stand with Iran “against unilateralism and bullying,” added that “the unilateral withdrawal by the U.S. from the Joint Comprehensive Plan of Action, giving up on its international commitments and [attempts] to exert maximum pressure on Iran are the sources of the current tension arising over the Iranian nuclear issue.”

“You could see the ayatollah crying today, because that was his number one strategist," she said. "That was the number one guy that has literally told all of the proxies in all of these countries who to kill, when to kill, how to kill. And that guy is now gone.”

She also claimed that Trump had displayed “great decisiveness, great resolve” in ordering Soleimani’s assassination, adding that it “as a long time coming.”