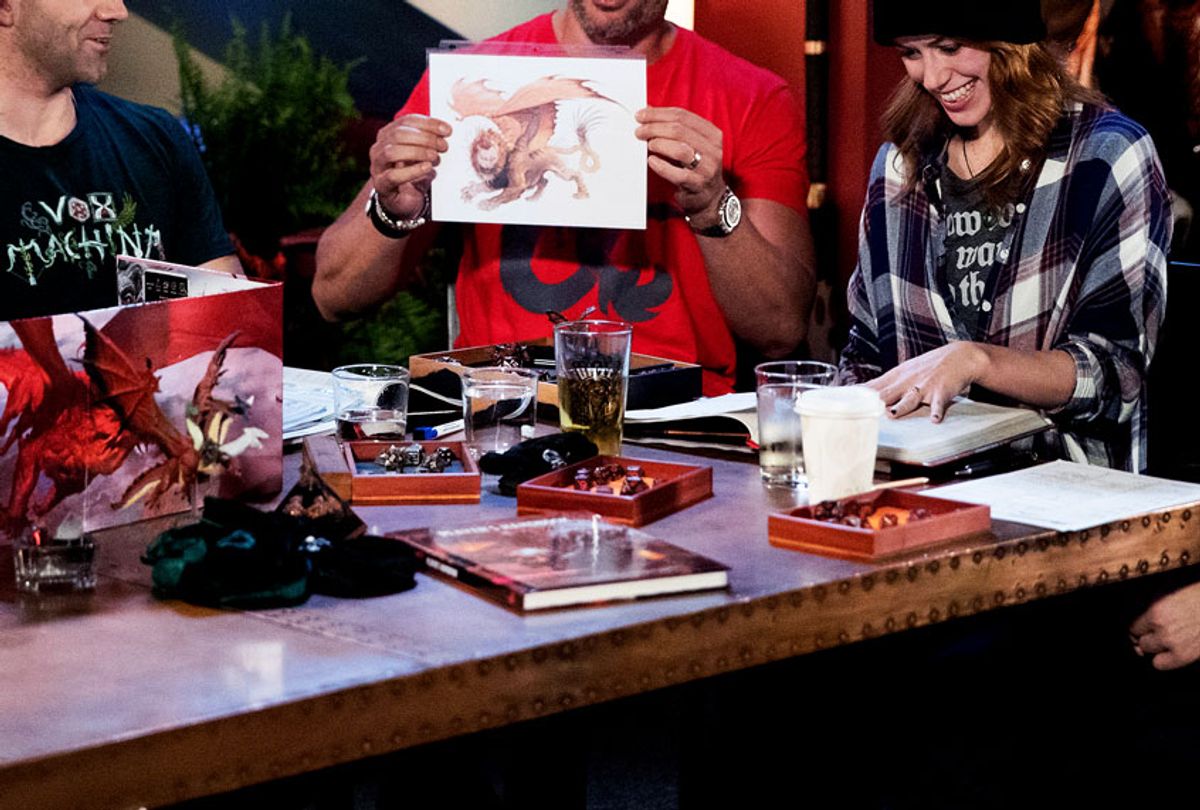 Joe Manganiello and the cast of Critical Role help unveil the new Dungeons & Dragons storyline, 'Tomb of Annihilation' during a live streaming event at The House Studios on June 2, 2017 in Seattle, Washington. (Mat Hayward/Getty Images for Dungeons & Dragons)
--

It's hardly a novel observation to note that role-playing games, especially Dungeons & Dragons (D&D), are no longer understood as the sole province of badly dressed virgins playing at being heroes in their mom's basement. D&D is hot right now, no doubt about it. Adults are craving the opportunity to engage in some in-person, zany fun that is so contrary to the digital, stressful lives we lead, and D&D is creating that opportunity.

But one part of playing games in meatspace is that the human body has physical needs that require tending, especially for gaming sessions that often last anywhere from 3 to 6 hours (or more). D&D requires a lot of engagement, which means people need to eat or they will, inevitably, get low blood sugar and start flagging. This is why a room littered with snacks is what comes to mind first when people think of D&D, because enthusiasts have long known that well-fed players are happy players.

But it's remarkably easy for snacking to go wrong, and for people's metabolic functions to undermine the goal of having an energized, spontaneous session that most players crave.

After over a half-decade of hosting D&D and other role-playing games in my house, I have learned, through trial and error, the best way to give people the calories they need to keep going without causing them to desire naps or to make such a mess of your house that you never want to play again.

As a bonus, all this advice works perfectly well for the gaming weenies out there who are afraid of role-playing games and just want to have a normie game night involving Jenga or Settlers of Catan or cards. Whatever you cowards are into, these rules will help your players stay awake and nourished.

Eat a real meal. Snacking is as central a part of D&D as the 20-sided die. This flow of munchies may tempt you into thinking a real lunch or dinner for your players is not necessary. In reality, snacks are rarely balanced enough to keep people happy, focused, and energized. Make sure that, even if it's light, people have a chance to eat a real meal during the game. You'll be glad for their energy levels if you do.

Get the meal situation settled before you start playing.  I hate how I feel like the nagging mom, handing people my phone and telling them to order something on Seamless before they even get to pull their dice set out. Their mind is on the game, and they want to get started, not think about food. But they are always grateful that I did it. With food choices out of the way, they can focus their attention entirely on the game, instead of being interrupted to fill out an order during it.

For snacks, go light on the sugar. It's fun to bake and tempting to make cookies or cupcakes for your adventuring squad. But while there's no way to completely banish the sweets from gaming tables, do not doubt for a second the dangers that a collective sugar crash presents to your ability to finish the  game strong. Try to focus on non-sugary snacks.

Low glycemic and high protein snacks are your best friends. During a recent game, a fellow player joked to me as I tore into a bag of chips about how we needed snacks with a low-glycemic index — foods that are digested slowly and so keep your blood sugar levels steady, not spiking. I laughed, but he was right.

Protein-heavy snacks, like hummus, help keep people from flagging. Plates of raw carrots and broccoli may not fit the stereotype of the unhealthy gamer, but people will be glad to have them. Whole grain crackers are better than potato chips or saltines.

Yes, nothing screams "adulthood" like a bunch of healthy snacks, but if the goal is to make role-playing games more palatable for adults, adult-style snacks can set the tone.

Alcohol. The flip side of running a grown-up D&D game is that you get to drink, at least some of the time. (I'm not fond of drinking at day games, but if you're playing after sunset, feel free to grab the booze.) Sometimes a little alcohol is just the thing that loosens people up to come up with some of the most harebrained ways to play their characters and the games, leading to laughter loud enough you worry about scaring the neighbors.

The key, as always with alcohol but particularly with D&D, is to know your limits. You should never drink to the point where following the game's plot or interpreting your character sheets gets challenging. A little tipsy is good — drunk is a disaster.

Also, though I shouldn't have to say this to adults, but never pressure someone to drink who doesn't want to drink. There are lots of ways to be rowdy during a game, so let the abstainers find their own way to have fun.

Greasy or messy food is a bad idea. As delicious and popular as Doritos are, they leave a bunch of powdered cheese on people's hands, powdered cheese that will get all over maps, miniatures, notes, characters sheets, any computing devices used for apps like D&D Beyond , and dice.

When picking snacks, look for those that don't have a lot of residue, like crackers or some of your less powdery chips. My groups have been fond of Popcorners and Stacys pita chips. But truly the MVP of snacks is the humble bag of microwave popcorn, which always tastes good and doesn't leave a bunch of hard-to-clean flavor refuse on your hands.

Use grown-up dinnerware. Gaming night is associated in most imaginations with paper plates, plastic forks, and red Solo cups. But as counterintuitive as it might seem, I've discovered it's better to gently encourage your guests to eat off real plates, use real forks, and drink out of real glasses. The stuff you'd serve on for a dinner party? Use it for your gaming night. Lay out coasters. Even if you order takeout, give people the option to slide their food onto a real plate.

The reason goes straight back to that messiness factor. Paper plates get soggy. Plastic utensils don't  hold food very well. Real dinnerware helps keep the food and liquids where they belong, and not on your gaming table.

Obviously, there are exceptions — stemmed glasses are a bad idea. But I find the clean-up is much easier if I let/encourage guests to use real dinnerware. Plus, you get that glow of self-righteousness by not generating a bunch of trash.

All of these suggestions should be treated like that — as general guidelines, not hard-and-fast rules. The most important rule in hosting a gaming night is to be flexible, after all.  People are going to bring snacks outside of these parameters. Someone will probably drink too much at one of your sessions. Eventually, food is going to get spilled on the gaming table. Unpredictability is the key to why role-playing games are so much fun. So set your table how you like it and then feel free to let the literal chips fall where they may.