Republicans are largely to blame for America's catastrophic "endless war." But Democrats have played along 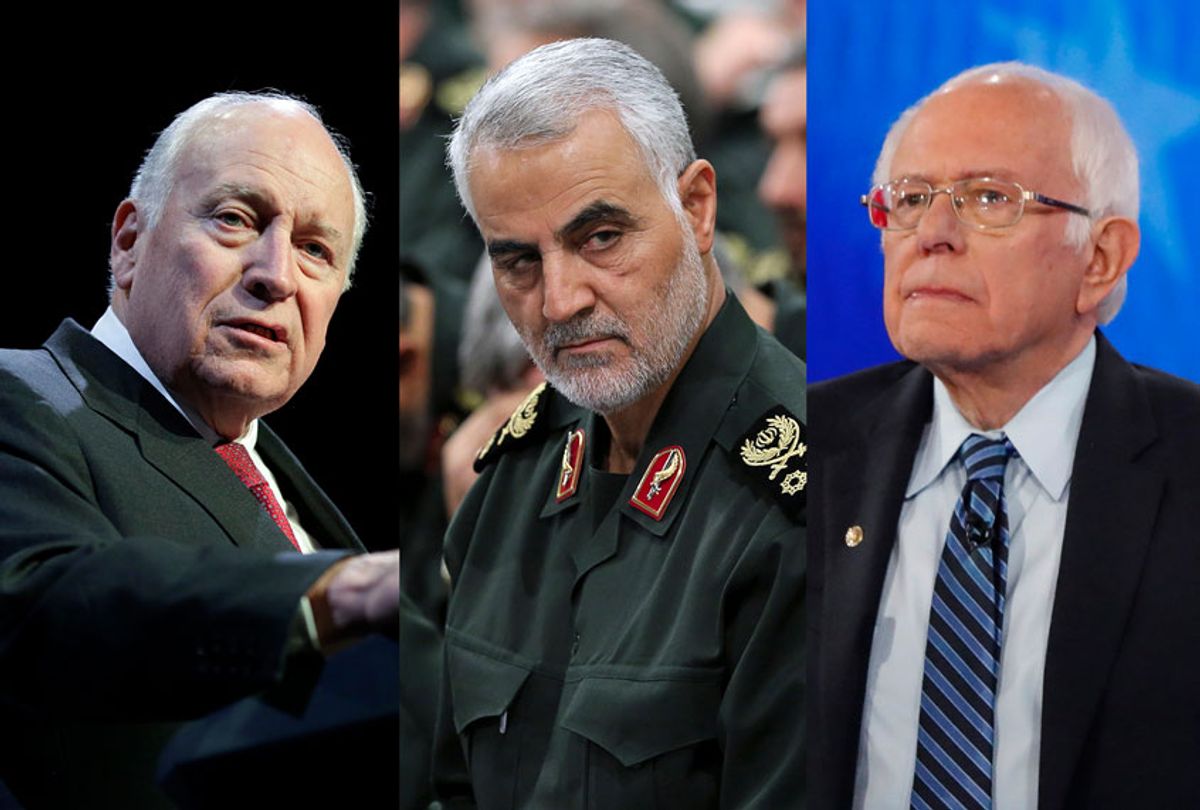 Human rights organizations report that the vast majority of people that the United States has killed through drone strikes are innocent civilians. Since September of 2001, in addition to invading and occupying Iraq and Afghanistan, the American government has consistently bombed Pakistan, Yemen, Somalia and Libya. Beyond acknowledgment that the numbers are in the thousands, there is little confidence in calculating with precision how many people have died due to U.S. strikes. To quote a Bruce Springsteen lyric, “We don’t measure the blood we’ve drawn anymore / We just stack the bodies outside the door.”

At any time within the past 18 years, leadership of any of the above countries could have concluded that the U.S. was planning more attacks — with the predictable consequence of more dead and maimed civilians. According to the logic of the Trump administration, and most major U.S. media, this would have justified the assassination of a leading U.S. official — perhaps former Secretary of Defense Donald Rumsfeld, former Vice President Joe Biden or even President Trump.

Like Dracula, the one object that American officials and pundits do their best to avoid is the mirror. Inverting the rationale of Trump’s order to assassinate Iranian Gen. Qassem Soleimani makes America’s rogue status, along with the absurdity of its pretexts for violence, as hard to miss as a bomb crater.

The common refrain is that Soleimani was an “evil” man with the “blood of Americans” on his hands. There is no question that Soleimani was allied with the Assad regime in Syria, which has indiscriminately killed countless civilians, and that he encouraged sectarian conflict throughout the region. But Soleimani was also a highly effective fighter against ISIS. For reasons that had nothing to do with humanitarian concerns, Soleimani succeeded in driving ISIS forces out of many Iraqi and Syrian cities. A cursory reading of history and geopolitical literature reveals that the world is far more complicated, even contradictory, than American discourse, with its comic-book categories of good and evil, would suggest.

So from many angles Soleimani was a villain. Fair enough. But for reasons of political and strategic significance, both the Bush and Obama administrations refused to kill him when they had opportunities to do so. If Dick Cheney, no one's idea of a dove, was willing to show restraint, maybe Trump's decision was as reckless as it appeared.

Speaking of Cheney, the charge that Soleimani was responsible for the deaths of Americans is likely true. But where were these Americans? Did Soleimani orchestrate one of the many mass shootings on American soil? Did he amass Iranian troops at the Texas-Mexico border?

If the United States had not illegally invaded and occupied Iraq, killing hundreds of thousands of Iraqis and poisoning the Iraqi environment in the process, Soleimani would have had no American targets to strike in Iraq. Trump has boasted that Americans in the Middle East are safer as a result of Soleimani’s demise. Amid all the chest pounding, neither the president nor any of his high-ranking officials, have explained why the U.S. currently has more than 50,000 military personnel scattered throughout the region.

The Bush administration is primarily to blame for the catastrophic $6 trillion war in the Middle East, but Democratic culpability has also ushered America to the edge of another war. Trump may have signaled that he is backing down in his incoherent address to the nation following Iranian rocket attacks on American bases, but there is unanimous agreement among experts that the situation remains fragile.

As many Democrats, including some of the highest-polling candidates in the 2020 primary, make a welcome move to the left on domestic social issues — offering proposals on Medicare for All, tuition-free public universities and paid family leave programs – most of the party remains meek, naïve and obsequious in the snarling face of American militarism.

The majority of Democrats, in the House and Senate, voted for the Iraq war. More recently, 188 House Democrats voted in favor of Trump’s $738 billion military budget.

Sen. Bernie Sanders criticized Trump’s latest budget boondoggle to benefit the military-industrial complex, but the only 2020 candidate to have opposed all of Trump’s military budgets is Rep. Tulsi Gabbard of Hawaii. She is also alone in her emphasis on reorienting American foreign policy away from war as crucial to the future health of the country. For her trouble, the New York Times ran a recent hit-piece profile with the headline, “What, Exactly, is Tulsi Gabbard Up To?”, and Hillary Clinton accused her of plotting to run as a third-party candidate, perhaps at the behest of the omnipresent Russians. Even among Democrats and the supposed liberal media, advocating for peace is inherently suspicious — if not unpatriotic — while banging the drums of war is always well within the bounds of acceptable political debate.

Democrats who refuse to rebuke American militarism expose their own fantasies and incoherencies. President Dwight Eisenhower, in a 1953 speech to the American Society of Newspaper Editors, warned that “Every gun that is made, every warship launched, every rocket fired signifies, in the final sense, a theft from those who hunger and are not fed, those who are cold and are not clothed.”

The United States cannot keep expanding its massive military might and also expand its social welfare state. More than half of discretionary spending in the federal budget goes to the Pentagon. If Democrats are unwilling to reduce the “defense” budget, they're like a patient with lung cancer pledging to do everything he can to reform his lifestyle — except give up his two-pack-a-day habit.

As Australia burns and the disastrous effects of climate change become more manifest, Democrats who make laudable proposals regarding the reduction of carbon emissions, including the Green New Deal, undermine their own credibility if they do not address military spending. According to the Watson Institute of International and Public Affairs at Brown University, the U.S. military is one of the worst polluters in the history of the world. Its fuel usage alone makes it the 47th largest emitter of greenhouse gases on the planet.

The one benefit of the Trump presidency is that his ghastly presence has provoked many Americans into important conversations about racism, sexism and the folly of revering the rich, which many of us had previously neglected.

Democrats must seize the opportunity of Trump’s lawless and dangerous strike against Soleimani to finally confront America’s addiction to war. Sen. Tim Kaine of Virginia, and various members of the House, have taken promising first steps by proposing legislation that would limit Trump’s war powers according to the guidelines of the Constitution.

If the rest of the party, including the most prominent presidential candidates, refuse to follow suit, they will share the blame the next time the bombs fall, dead children in a distant land are described as “collateral damage,” and young Americans return home to their families in flag-draped coffins.