Farms are starting to see the light as on-farm solar proves to be an important income stream. 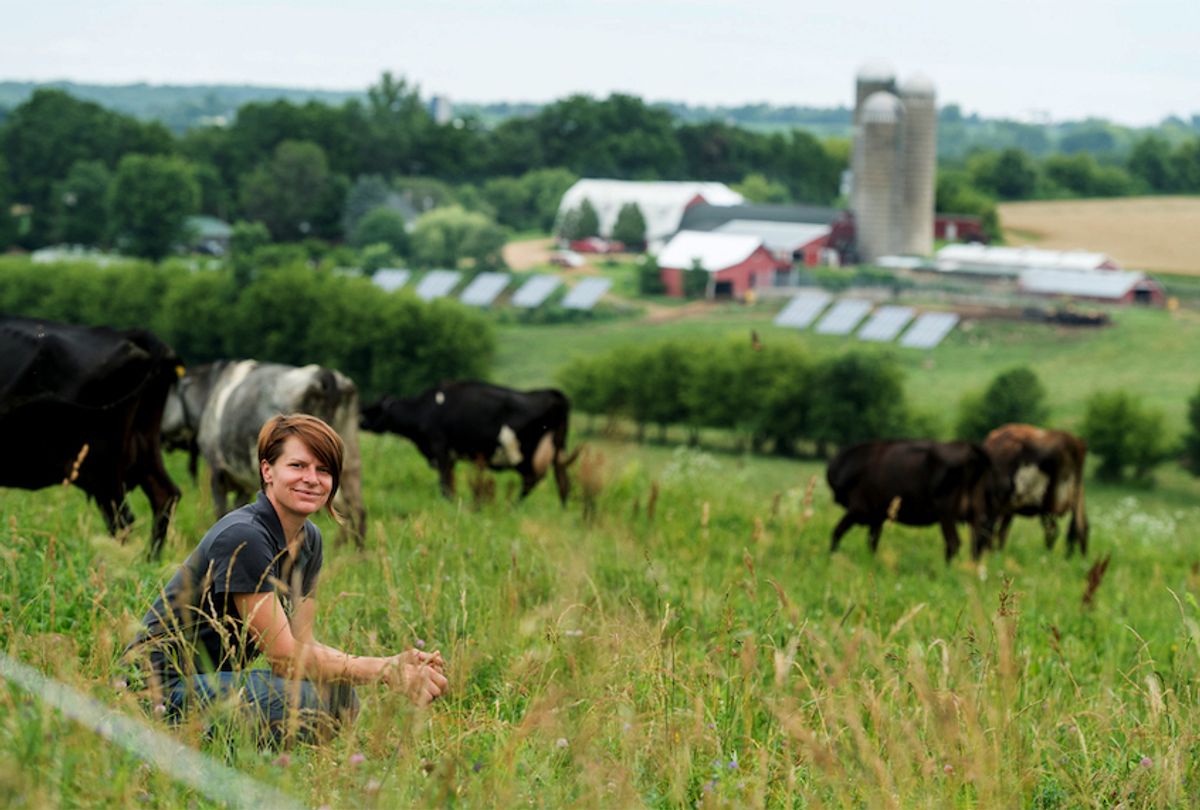 Steve Pierson switched from raising conventional dairy cows in confinement to grazing the animals on organic pasture for a simple reason: they kept getting sick. He had heard and read about the fact that cows that ate grass had healthier immune systems, since their bodies are designed to digest grasses, not the grain used as feed at most dairies. The transition did make the cows live longer, and he also began to notice other environmental benefits, such as healthier soil and more perennial grasses.

“I didn’t understand at that point the far-reaching benefits that [grazing] can have…and it started me on this journey to sustainability,” he said. “That’s what led us to investigating solar and sustainable energy practices on our farm.”

Pierson runs his organic farm in Saint Paul, Oregon, 30 miles south of Portland, with his wife and three children. He’s a member (and sits on the board) of the national dairy co-op Organic Valley, and the family’s farm is one of about 350 within the co-op’s network of more than 2,000 farms that has installed solar energy systems. Organic Valley says it is helping its member-owners install solar because it’s a relatively easy win-win scenario—a means for farmers to bring costs down amid a bleak farm economy while simultaneously reducing fossil fuel consumption. [Disclosure: Organic Valley has been a supporter of Civil Eats in the past.] 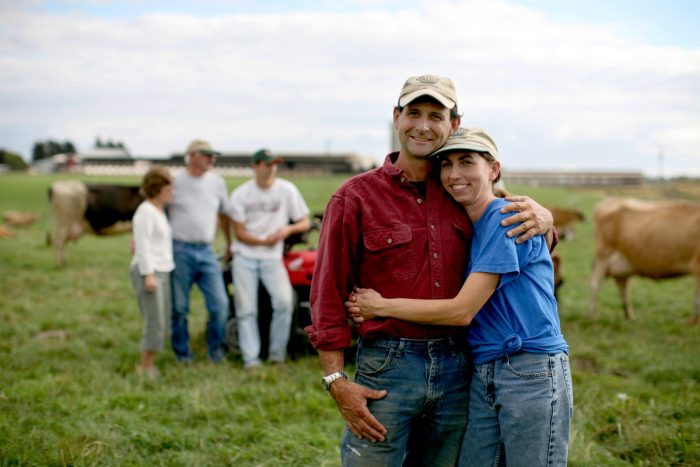 Steve Pierson of Organic Valley with his family.

Organic Valley’s goal is to triple the number of farmers it helps with solar installations over the next few years. It has dedicated staff members supporting farmers as they navigate the installation process and access grants; company staff have been in Washington, D.C. advocating for an extension to the federal tax credits that help farmers afford the upfront cost.

The company’s efforts aren’t happening in a vacuum. Although the solar energy industry and agriculture have been at odds in the past due to competition for valuable farmland, there appears to be new momentum behind a push toward installing more solar panels on farms. (There is also growing interest in agrivoltaics, dual-use solar installations in which crops grow and animals graze below and around panels, but those systems are much less common.)

According to the 2017 Census of Agriculture, the number of farms with solar panels increased nearly 150 percent between 2012 and 2017, from 36,000 to 90,000. Even American Farmland Trust (AFT), an organization dedicated to preserving agricultural land, is promoting agriculture and solar “co-location.” AFT just hosted an event last month for Long Island farmers called, “Combating Climate Change: Solar Energy, Farming, and the Future in New York.”

“Renewable energy is a natural fit for America’s farmlands. When you put a solar array or wind turbine on a farm, it pays dividends both economically and environmentally,” said Gregory Wetstone, president and CEO of the American Council on Renewable Energy (ACORE). “We’re just scratching the surface of the partnership potential.”

Planting (and paying for) panels

“The commitment to sustainability is waking up before the sun and farming in a way that supports ecosystems—and solar has been part of our on-farm work for years,” said Stanley Minnick, Organic Valley’s energy services and technology manager, during a presentation at the Solar Energy Industries Association conference in November. Minnick was at the event to present the results of a project the company had completed at its corporate headquarters. After installing solar panels on three rooftops, investing in both solar and wind farms, and forming creative alliances, the company’s operations are now powered by 100 percent renewable energy. 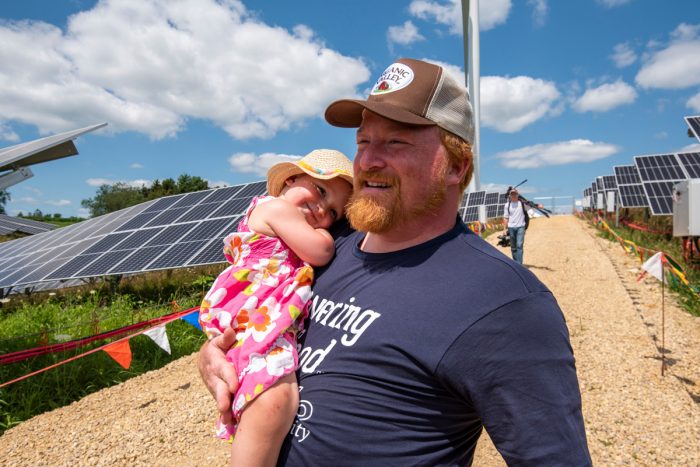 But with a network of dairy farms across the country, Organic Valley’s energy footprint is much greater across the supply chain. Which is why, Minnick said, the co-op committed to helping farms evaluate, implement, and afford solar systems several years earlier.

“We’ve had a formal sustainability program for over 10 years and it really did start with renewable energy,” Nicole Rakobitsch, Organic Valley’s sustainability manager, told Civil Eats. Rakobitsch oversees an on-farm solar team, which reaches out to member farms and educates them about the opportunity to install solar arrays on their farms. Team members also offer technical assistance around what size system is appropriate, conducts site assessments, and more. They can also help farmers tally costs and write grants for programs like the U. S. Department of Agriculture (USDA)’s Rural Energy for America Program (REAP).

That piece is crucial for small and medium-scale farmers because the up-front installation costs are so high. And while many farmers are struggling to make ends meet, the economic situation is especially dire for those in dairy.

Pierson initially installed three ground-mounted 10-kilowatt systems on his farm, on land he wasn’t able to use for grazing, for a total cost of $120,000. But energy credits he got from the Oregon nonprofit Energy Trust, plus a federal grant and state and federal tax credits, brought that cost down significantly. Now, he estimates that the system generates about 50 percent of the farm’s electricity, effectively cutting his annual bill in half. Pierson was so happy with the results that he built a much larger 260-kilowatt solar system on his second farm, where he grows forage for the cows on about 700 acres. That system generates about 90 to 95 percent of the farm’s electricity.

While the numbers vary based on the type and size of farm, according to a 2016 USDA report, most farms’ electricity costs account for about 2 to 4 percent of their overall costs (with the exception of small and medium-sized poultry farms and large peanut farms, which are significantly higher). That means saving on electric won’t make a massive dent in overall costs, making incentives and credits to cover the upfront cost more important to adoption.

It’s why Minnick, after the industry event, lobbied elected officials for an extension of the solar investment tax credit (ITC), a 30 percent credit that is set to begin lowering incrementally in 2020. Advocates like ACORE’s Wetstone say the credit has dramatically increased the adoption of solar energy across the U.S. since its creation in 2005.

For some farmers, however, the tax credit isn’t solar energy’s most attractive financial benefit. Shane Hughes left his job in finance to start Liberty Delight Farmsin Reisterstown, Maryland, 10 years ago. Hughes produces pasture-raised beef, pork, chicken, and other meats on 100 acres and grows his own feed nearby, on another 400 acres. When he decided to build a new barn in 2015, a neighbor approached him about installing solar on the roof, and he engineered the building from the ground up to support the panels. Like Pierson, Hughes saw a connection between the way he was farming and the need to reduce dependence on fossil fuels.

“It made sense in terms of sticking to our model of doing our part to help and preserve the environment,” Hughes said.

The financial benefit he was hoping for, however, didn’t pan out as he expected. Hughes was able to apply some property tax credits to buy his system, which produces about 80 to 85 percent of the farm’s electricity, significantly cutting down on his roughly $1,200 monthly electric bill. However, he was banking on benefitting from Maryland’s Solar Renewable Energy Certificate (SREC) market to help pay off his solar array. States with SREC markets require energy companies to get a portion of their electricity from solar. Those companies can produce that energy on their own or buy SRECs from individuals producing solar. 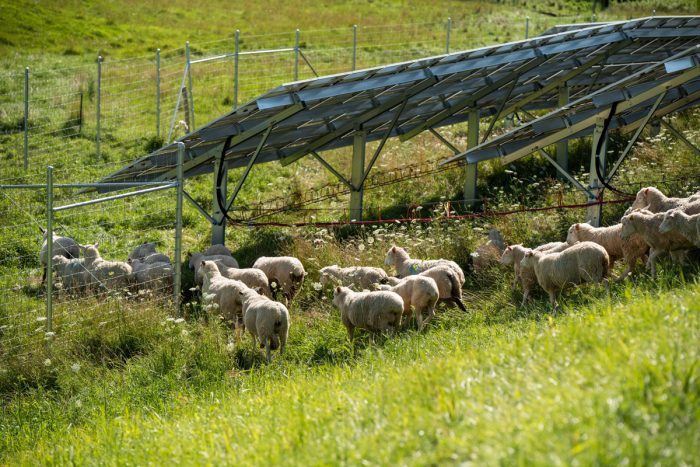 When Hughes installed his system, SRECs in Maryland were rarer and extremely valuable; he estimated the payback period on his installation was about 12 years, with those SRECs factored into to the payback. But as more solar panels were installed across the state, the number of SRECs grew and their individual value plummeted. Now, he says he’s looking at a payback period of more than 20 years.

“If our government would force the utility companies to purchase more renewable energy, it would increase the value of SRECs, and I’d be more of a proponent of it,” he said.

Commodity crop farmers in other states are also increasingly renting their land out to energy companies to build large solar installations that sell energy back to the grid. According to the Washington Post, hundreds in Illinois have applied to host acres of panels on their farms to help the state meet its renewable energy goals. This approach is much more lucrative than simply cutting energy costs on the farm, but it’s also controversial since it often involves taking fertile farmland out of production.

The experiences of farmers in Maryland and Illinois point to a reality that is shaking out across the agricultural landscape. Right now, the most impactful action on environmental policy is happening at the state level.

“There’s no question that smart state policies have been critical to accelerating the deployment of renewable power,” said Wetstone, who cited a survey ACORE released earlier this year. In the survey, renewable energy investors cited “expanded state renewable portfolio standards” as a top reason for optimism on the continued growth of renewables over the next three years.

For farmers looking to install solar, what they have access to in terms of grants, tax credits, and SREC markets varies significantly state to state.

Still, advocates are pushing hard for the extension of the federal ITC extension. At the end of November, House Democrats released a draft of a tax package called the GREEN (Growing Renewable Energy and Efficiency Now) Act, which would continue the 30 percent credit through 2024, with incremental reductions after that. At this point, it’s unclear whether that credit will make its way into year-end tax legislation.

Stanley Minnick, for one, is continuing to push for the policy, while Organic Valley works to help more farmers assess their solar prospects and manage the on-the-ground (or on-the-roof) logistics.

“We talk about how many farms we’re losing every year, and this is one more piece of the puzzle,” he said. “I had a farmer once who said to me, ‘Stanley, this project, it’s like giving myself a $500 raise.’ That’s a car payment. That matters to a small farm, especially.”

All photos courtesy of Organic Valley.