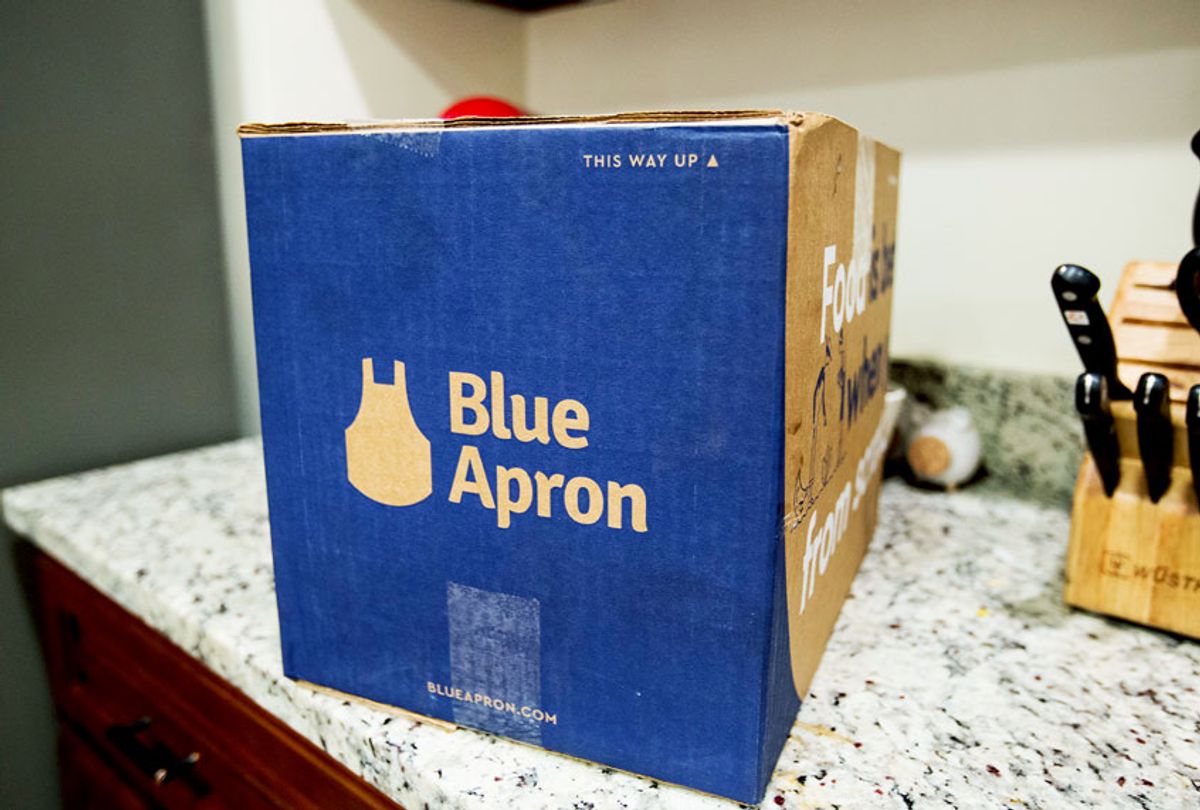 In this photo illustration, a Blue Apron box waits to be opened on a kitchen counter (Scott Eisen/Getty Images)
--

Delivery meal kits were a nonexistent concept 15 years ago; by 2017, the market for them was worth $4.65 billion. The conceit of these kinds of subscription companies — which include the behemoth Blue Apron as well as smaller companies like HelloFresh, Plated and Sun Basket — is so simple it seems strange that it to exist. Consumers do not buy, but rather subscribe to regular delivery — a key point that preserves profits, as all corporations prefer to rent you a service forever rather than have you buy it once. Inside these boxes, they will find a recipe and a normal assortment of raw ingredients like fruits, veggies and meats that they then must cut, chop and cook themselves.

To those that enjoy cooking, this sounds like a needlessly complex addition to two simple life tasks. If you can shop at the grocery store and Google a recipe, these subscription boxes seem superfluous. The concept feels like a get-rich-quick scheme, a form of arbitrage.

And yet, consumers, particularly upwardly mobile millennials, have flocked to these services — as have investors. That should tell you something profound about our culture's relationship with cooking, food and convenience.

Why do these companies exist, and in such numbers, and what causes investors to continue to throw money at them? The answer to that question has less to do with the quality of the food, and  more to do with marketing and work culture.

Americans work way too hard. In 2015, the United States surpassed Japan, an infamously workaholic society, in number of hours worked annually per worker. Though we are not number one among workaholic developed nations, we are close to the top. Notably, U.S. workers have no legal right to sick or vacation pay, unlike the Japanese and most European countries. In 2018, The Nation reported that a third of American workers work more than 45 hours a week, and 9.7 million work more than 60. As a result, many Americans are sleeping less, merely 6.5 hours a night on average, to compensate for overwork.

Overwork and lack of sleep understandably lead to an interest in time-saving "solutions" to the problem of overwork. Meal kit delivery boxes are certainly one of these. Obviously, between work and sleep, many American workers don't even have the time to cook elaborate meals, much less shop for groceries. The growing meal kit delivery industry is fulfilling their desire to have more time in their lives, albeit at a severe markup from grocery store prices.

But Blue Apron and Plated aren't a "solution" to overwork and lack of time. The solution is to literally organize to change the laws so that we work less — to have more worker protections, higher wages, and better social systems like universal health care — that would give us more time and joy in our lives such that no one would want these meal delivery kits in the first place.

The meal delivery kit industry is an excellent dystopian example of Silicon Valley profiting off of a decaying welfare state, something that has become a common business model for Big Tech. Other recent examples include Uber, which profits off of underfunded and dying public transit systems (and admits it); Airbnb, which administers short-term housing slums in expensive and gentrified housing markets like the Bay Area, as Corey Pein documented in his book "Live Work Work Work Die"; or GoFundMe, a for-profit fundraising platform where people raise money to cover basic needs like food and healthcare — you know, the kinds of things that a normal advanced liberal society should provide its citizens.

In a more just society and economy, none of these "innovative" companies would exist. Frighteningly, these companies (and their lobbying dollars) have a disincentive to the realization of a more economically just world.

Cooking all the way to the bank

A wry critic might note that humans have been cooking for literally tens of thousands of years. Indeed, the vast majority of meals eaten in human history did not arrive via a third-party middleman backed by venture capital funding. Moreover, cooking was, for much of human history and in many cultures still, not thought of as a professionalized skill. It was something you did to make sustenance and survival a little more palatable.

Some, but not all, consumers who buy meal kits are drawn to them as a means of learning to cook.  One of Plated's bloggers advertises how the service taught her "to cook like an adult." "Before Plated, we were pretty limited in our cooking abilities as well as confidence in the kitchen," the blog reads. "My skills and knowledge were pretty basic as well and I found a lot of recipes intimidating when they listed out all of the steps at once."

Yet one does not need to turn to Plated for recipes. One might attain the same skills from merely googling a recipe or buying a cookbook. So what does a subscription to Plated buy? The company sells not merely a box of raw food, but an idea: the idea that cooking is a professional skill, one that requires great expertise — in selecting ingredients as much as in designing recipes.

The point, then, of subscribing to a service like Plated, is curation: the notion that their appointed experts have brought them the finest meals, designed to be easy, simple and quick.

The old "teach a man to fish..." maxim applies here. If Blue Apron or Plated's customers thought of cooking as an easy, creative task that anyone can do, and something that doesn't even require strict adherence to a recipe, they wouldn't be Blue Apron customers in the first place. Instead, they would be cooking casually and with no anxiety at all, as most humans have done for almost all of human history.

In short, meal kits are gentrifying cooking. They take something accessible, creative, casual and very easy, and make it appear to be a rarefied task that only professionals can teach. They sell the professional experience and advice through their products.

This is the other sinister capitalist" innovation" at the heart of meal kit marketing. Specifically, the marketing around them creates anxiety in consumers, and then immediately assuages it. The anxiety emerges in the idea that cooking efficiently and shopping for groceries is difficult — a rare art that only specific professionals can master. Then it assuages that anxiety by offering customers the opportunity to enjoy the fruits of those experts' work.

As chef and writer Alison Cayne wrote in the New York Post, "I think of [meal kits] like riding a bike. Meal kits promised to be the training wheels, eventually getting folks to the 'Look Ma! No hands!' moment. But therein lies the big miss. There is no 'Look Ma!' moment."

In short, the aspiring Blue Apron home cook can't halt their subscription, or said anxiety returns. You have to keep subscribing forever. That's the genius of the marketing.