Pay us forever: Apple wants you to rent your life from them 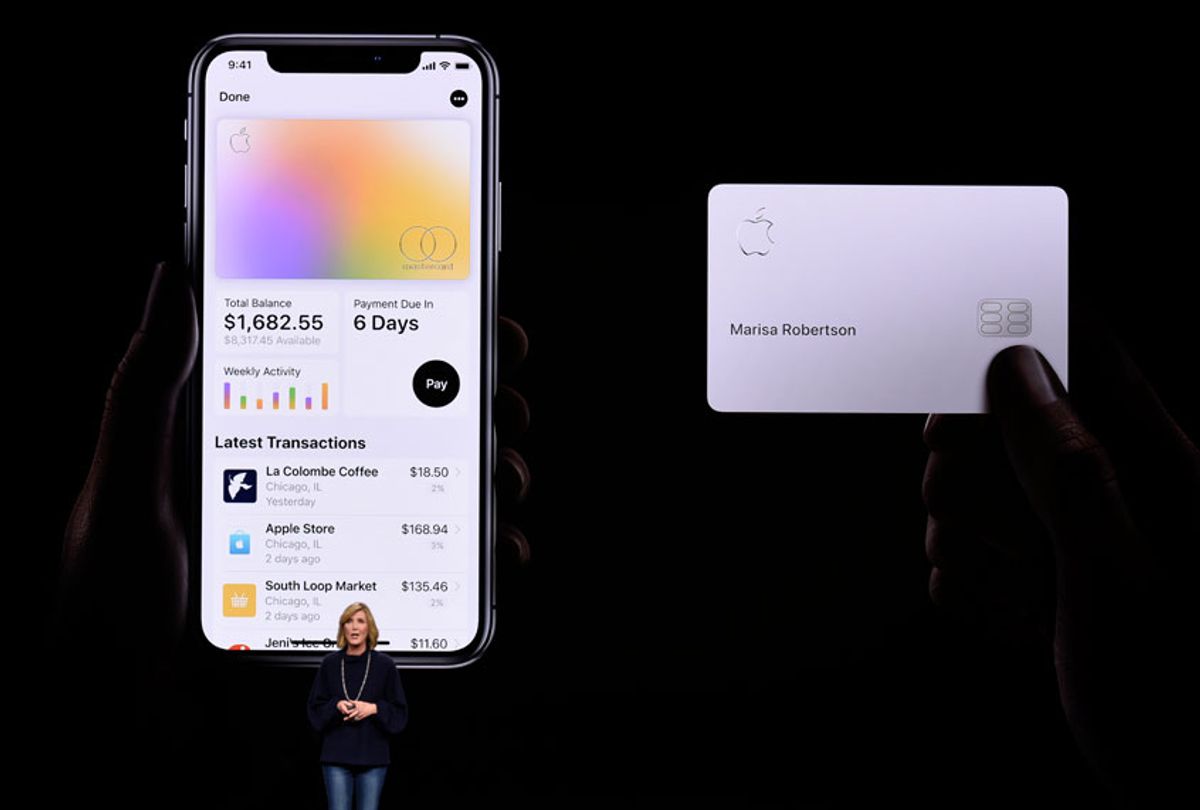 Apple, a tech company renowned for its gadgets, held an event on Monday in which it announced five new offerings, only one of which was an actual gadget (the little under-the-TV box known as the Apple TV). The rest of its new products were “services,” an ethereal category so profitable that it has become the second-biggest revenue generator at the most valuable public company in the world. What “services” refers to, really, are things that you subscribe to and pay for forever, or at least until your subscription terminates. But Apple, like every other subscription business model, would prefer your subscription doesn’t terminate.

You might call this business model shift “rentier creep”: the phenomenon by which services we formerly owned become rented, and things that once were bought outright become bought on credit. Apple’s pivot — if you can call it that — to renting ever-more things to its customers epitomizes this cultural and economic shift, and presages a dismal future in which we become beholden to some of the largest corporations on Earth for our survival for the rest of our lives. It is a shift that Apple’s peers in the tech industry have been building towards for years now, making Apple late to the game.

The term rentier society refers to an economic model of this design, and it has its origins in the early history of the United States, which was characterized by a slowly financializing economy. Mortgages didn’t become normal until the very early 20th century, spurred by immigration; previously, the notion of buying a home on credit was shunned, a cultural outlier. Though the finance industry would like to tout mortgages as a means of achieving one’s dream, it just so happens that a world in which banks owned the majority of people’s homes could easily lead to disaster if a vast number of people simultaneously suffer financially due to economic or natural disaster.

This is exactly what happened during the Dust Bowl in the plains states in the 1930s. John Steinbeck’s great Dust Bowl novel, “The Grapes of Wrath,” does an excellent job explicating how a financier-promoted rentier society spurred the mass exodus of Oklahomans post–Dust Bowl that resulted in death, loss and exploitation. In short, many Great Plains residents had mortgages on their farms prior to the disaster; then, when the Dust Bowl made farming untenable, those people became unable to pay the mortgage, at which point the banks came around to repossess their properties, sending starving Oklahoman families fleeing to the promised lands of California where they often met an even worse fate or died along the way. (An estimated 250,000 people fled the plains states in the Dust Bowl.) As Steinbeck described in that book:

The owners of the land came onto the land, or more often a spokesman for the owners came. ...The women and the children watched their men talking to the owner men. They were silent.

[T]he owner men went on leading to their point: You know the land’s getting poorer. You know what cotton does to the land; robs it, sucks all the blood out of it.

The squatters nodded—they knew, God knew. If they could only rotate the crops they might pump blood back into the land. Well, it’s too late. And the owner men explained the workings and the thinkings of the monster that was stronger than they were. A man can hold land if he can just eat and pay taxes; he can do that.

Yes, he can do that until his crops fail one day and he has to borrow money from the bank.

But—you see, a bank or a company can’t do that, because those creatures don’t breathe air, don’t eat side-meat. They breathe profits; they eat the interest on money. If they don’t get it, they die the way you die without air, without sidemeat. It is a sad thing, but it is so. It is just so. ... The bank—the monster has to have profits all the time. It can’t wait. It’ll die. No, taxes go on. When the monster stops growing, it dies. It can’t stay one size.

The 2008 recession was an odd echo of the Dust Bowl, albeit precipitated not by a specific natural disaster but by speculation. Houses were (as usual) bought on credit, often under false assumptions, resulting in millions of foreclosures and evictions by people just like the bank-men in “Grapes of Wrath.”

Home mortgages may have been normal back in the 1930s, and still are today: only 30% or so of Americans own their homes outright. Yet unlike in the Dust Bowl Era, we own far fewer things — including cars (Americans owe around $1 trillion in auto debt), our rented entertainment, and, arguably, our degrees. (Although degrees cannot be rescinded once awarded, the debt from them is unforgivable by design.)

In the past ten years, the tech industry has been the main promoter of the transition towards a world in which we never own anything, but merely rent our lives from capitalists — from cars to hotels, contract gigs to music to movies to games. The still-dominant big tech companies founded in the 1980s — companies like Apple, IBM, Microsoft, Dell and HP, known for software and hardware primarily — mostly avoided the rentier society game until the past decade, when they realized how much more lucrative it is to rent rather than sell. That's why it’s near-impossible to buy Microsoft Office or Adobe Creative Suite these days — you’ll have to settle to rent them from Microsoft and Adobe, respectively. The business reasoning is simple: If I buy Microsoft Office once, Microsoft only gets my money once; but if I have to pay $10 a month for it for the rest of my life, Microsoft has me hooked. The drug dealers had it right.

Uber, Lyft, AirBnB, Spotify, Netflix, Apple Music, Lime, Spin, Bird, and other gig economy-adjacent companies attest to the Brave New World in which we no longer own our media, but rather rent it constantly. There is even a movement towards rentable clothes: Wired just published a googly-eyed feature hypnotically titled “Just Rent Your Clothes”) reviewing startup Rent the Runway.

Apple’s new offerings for subscriptions include news (Apple News+), television (Apple TV+), and gaming (Apple Arcade); fittingly, they announced these along with a financial instrument, a credit card they plan to offer, perhaps to finance this newly-rented life. Each of these subscriptions offers an instance in which the consumer rents a product from Apple, never quite owning it outright — something you can already do with their phones, interestingly.

With news, at least, that sort of makes sense: owning a newspaper is a futile endeavor, expired the next week. (Note: Apple News has other, serious problems unrelated to the rentier model and more related to the massive cut they take from publishers, but that is another article.) But with gaming and television, it suggests the company has fully succumbed to this new labor model.

Rentier society should scare us inasmuch as it presages a dystopian future in which we permanently rent the fruits of our existence from corporate overlords. Such a scenario is particularly frightening in cases in which said companies are either poorly regulated — meaning they become, instantly, adroit exploiters of their customers — or in which oligopolies and monopolies exist, thereby keeping prices too high and trapping consumers. Such a situation already exists among internet service provider companies, which have essentially colluded to carve up the United States’ different regions so that they can exploit and profit each with maximum efficiency while avoiding investing in infrastructure except at a bare minimum. The rapidly-contracting cell phone industry is currently doing the same.

The biggest fear of rentier world, though, comes if the tech industry continues to consolidate — if there becomes no alternative to rentier society, and a few trillion-dollar companies control our lives. Then, existence would become extremely pricey. Imagine if  clothes, cars, bikes, scooters, entertainment, news, utilities, homes, communication access, video games, beds, furniture, even our access to job boards (hello, Linkedin Premium) were rented. Maybe that company will be Apple. Maybe we’ll get billed for our lives on our new Apple credit cards, and we will run up debts to the company that we can’t pay once the next metaphorical Dust Bowl wipes us out. What Steinbeck wrote of the banks applies to Apple, too: When the monster stops growing, it dies. It can't stay one size. It needs more money.