The Democratic debate stage is now all white. It doesn't have to be this way

The party that lays claim to a multiracial future presents white contenders in 2020. That's bad for democracy 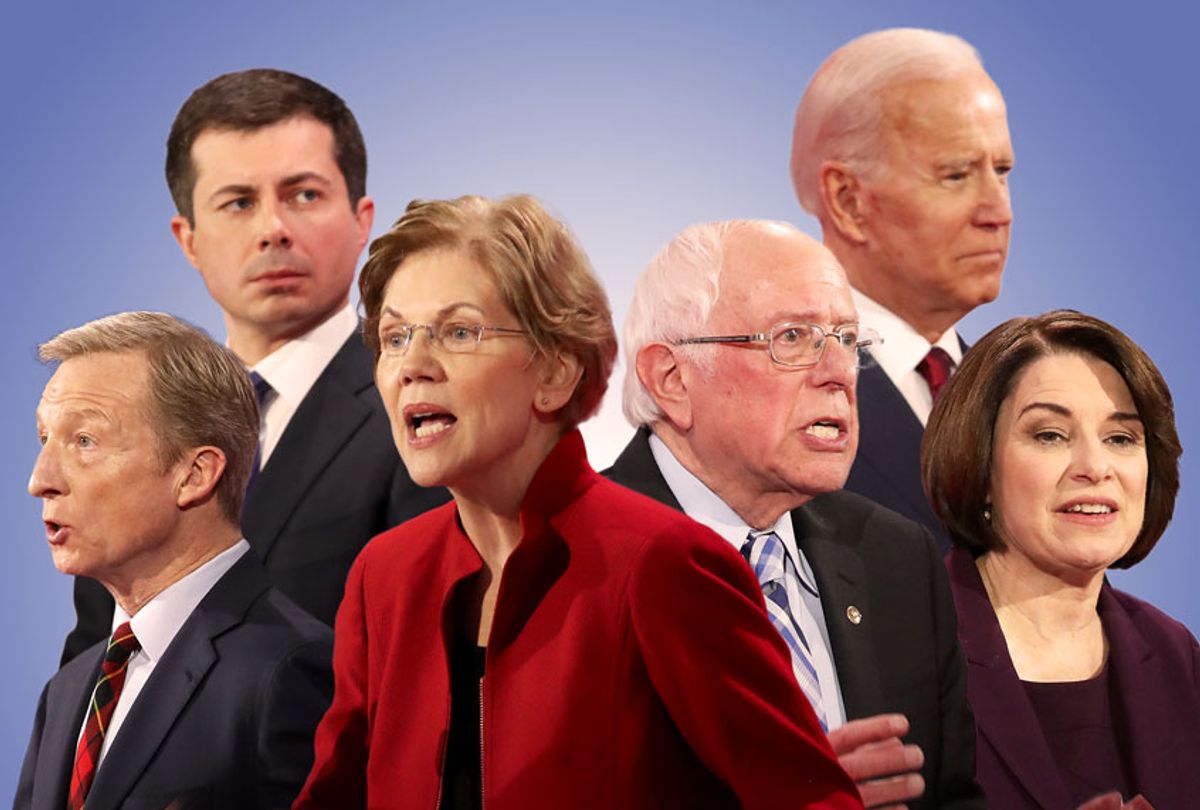 The Democratic presidential field began as the largest and most diverse in American history.

Not any longer. When the party gathers in Des Moines this coming Tuesday for the seventh presidential debate, less than three weeks before Iowans cast the first actual votes of 2020, things will look much different.

Only six candidates will take the stage. All of them will be white. Only three will be under the age of 70. One will be a billionaire. Years from now, historians might compare photos of this debate with Democratic gatherings in the 1980s or 1990s and not be able to tell the difference. It’s an awkward look: The party that lays claim to the nation’s multiracial future will present five white people as its leading contenders.

It didn’t have to be this way. Democratic leadership, anxious about the crowded field and unwieldy debates, intentionally structured the process to winnow down the number of candidates before any ballots were actually cast.

While almost every announced candidate made the first debate, last summer, few voters had actually begun to pay attention. But then, the bar jumped ever-higher: With each debate, candidates needed to show significant progress in the polls or add tens of thousands of new small donors. Without the debates, candidates couldn’t build a following. Without a following, they couldn’t make the debates. The money they raised didn’t go into building a field operation, but instead got plowed into online ads searching for more contributors.

Without a single ballot being checked, without huge swaths of the party even tuned in to the race, all of the field’s color and most of his youthfulness drained away.

As a result, it will be Joe Biden, Bernie Sanders, Elizabeth Warren, Pete Buttigieg, Amy Klobuchar and Tom Steyer fielding questions from CNN and Des Moines Register reporters on Tuesday night. One additional billionaire businessman, Michael Bloomberg, has, like Steyer,  spent more than $100 million of his own money on advertising and has the financial wherewithal to self-fund. It’s hard to see how anyone else can continue much longer.

It’s too late for 2020. Democrats will have to live with this look and with these decisions to prematurely whittle away contenders who deserved a longer look. It’s unfortunate that voters didn’t have more of a say before candidates, especially those of color, began falling away.

But it’s not too early to think about how to prevent this from happening next time. After all, these massive candidate pools are not going away. Prior to this gigantic Democratic field, Republicans had a record number of hopefuls in 2016. Just imagine the free-for-all if both parties have an open race in 2024.

The very best way to handle a large field — and ensure a nominee that the largest possible number of voters can support — would be with ranked-choice voting.

It’s a simple switch: Instead of selecting one candidate, voters put their favorites in order. Typically, an “instant runoff” mechanism eliminates the candidates at the bottom and redistributes those votes to second or third choices, until someone crosses the 50 percent threshold. RCV is used widely around the world, and in a growing number of cities and states nationwide. Maine has adopted it for Senate and congressional elections, and Massachusetts and Alaska are readying similar initiatives. New York City recently passed an initiative to elect future mayors and city council members this way too. It fits with party rules, as well. Democratic parties in four smaller states, in fact, will use RCV this spring, in tandem with the party’s 15 percent threshold for winning delegates.

The beauty of this lies in the fact that there’s no need to artificially weed out candidates this early in this process. Candidates would have multiple opportunities to make their case to the nation after the nation actually starts to pay attention. Everyone could voted for the candidates he or she liked best, without polls from late 2019 limiting the choices to those with the greatest name recognition. A winnowing process would of course still happen before the final debates, but based on actual votes cast. (And the next winnowing — from four tightly-packed frontrunners and two billionaires down to one nominee — would produce a winner with the widest support, rather than the narrowest plurality.)

More candidates would have stayed in the race longer. More debates would have stretched over two nights. That might be messy. It’s also democracy. Voters would have made the decisions about who moves forward, not party leaders and pollsters. And those voters would be able to vote their hearts and their heads, with the power to support a candidate lower in the polls and then a second-choice ballot for a frontrunner, without “wasting” a “spoiler” vote on someone with little chance of winning.

With ranked-choice voting, the Democratic field might still have greater geographic diversity, rather than pushing western governors like Jay Inslee, Steve Bullock and John Hickenlooper aside. And the debates would certainly have had greater racial diversity: Kamala Harris and Julián Castro would have been able to go before the voters, while Cory Booker and Andrew Yang would still be heard from in debates.

Our presidential campaigns should be about airing issues, hearing from a wide variety of voices, and empowering the largest number of voters to select the nominee they like best. That means genuine electoral reform — and a system that does a better job of accommodating genuine voter choice.