Before you get mad online, ask yourself: Who benefits most from rancor between Democratic campaign supporters? 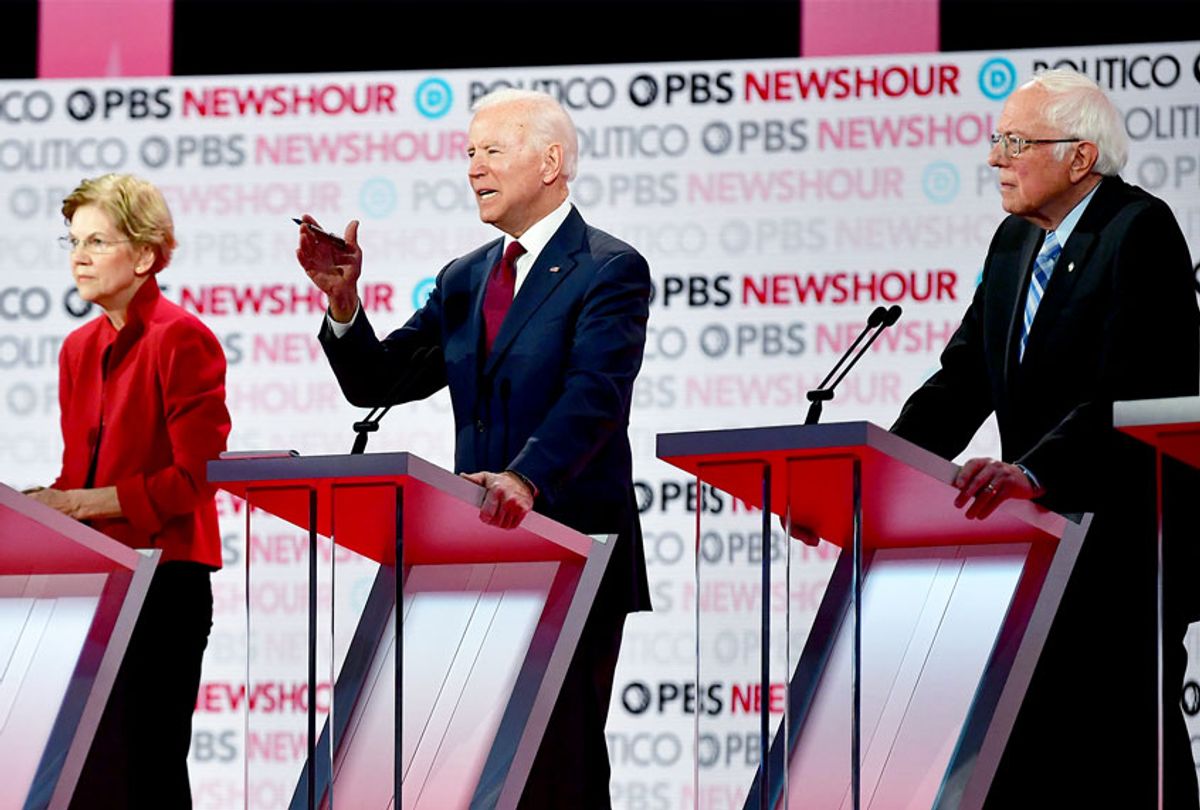 Over the weekend, there was high drama among the political junkie world after Politico ran a headline declaring, "Bernie campaign slams Warren as candidate of the elite." Temperatures flared on Twitter. This headline seemed to confirm a fear that many survivors of the 2016 Democratic primary had, which was that a group of extremely online fans of Sen. Bernie Sanders of Vermont — who have been bashing Sen. Elizabeth Warren of Massachussetts with frankly misleading attacks for months — have managed to take over the official campaign and are turning it towards the goal of demonizing a strong, progressive woman for the crime of being female and competing with their beloved Bernie.

Those toxic Bernie fans exist, and don't let anyone to try gaslight you into believing otherwise. But it's hard to justify getting bent out of shape about the Sanders campaign based on the actual text of the story past the headline.

The whole debacle, in fact, is just further evidence that, going into what is going to be a tense primary season, it's important for people to at least try not to get riled up by provocative headlines and instead read actual stories. And to be particularly wary of outrage bait from headlines that play well on Twitter.

What the actual story shows it that volunteers for the Sanders campaign were given a script that included some language to use when voters they're talking to say they're leaning towards another candidate — not just Warren, but also South Bend, Indiana Mayor Pete Buttigieg or former Vice President Joe Biden. And of the three, the objections cited regarding Warren are, however incorrect one might think they are, less aggressive than the ones aimed at Sanders's male opponents.

"I like Elizabeth Warren. [optional] In fact, she's my second choice," the script reads. Then volunteer is asked to argue that Warren's  voters are "highly-educated, more affluent people who are going to show up and vote Democratic no matter what" and Sanders can draw the "disaffected working class voters."

In contrast, volunteers are not asked to say that they like either Buttigieg or Biden, but simply to say Buttigieg has "many admirable qualities" but he's "not winning over young people or African Americans" and while "[M]any people" like Biden, "no one is really excited about him."

I think this script ignores the reality that Warren's current support is likely more the result of her being less well-known to the general public than to people who have the privilege of following the race very closely, and that suggests her popularity will grow as more people get to know her. But it's also an argument that's defensible, and worth at least considering.

So it's hard for me to get too worked up about this. The reality is that the Iowas caucus is a four-way race right now, and voters are putting a priority on picking the candidate that can best beat Donald Trump. Having a ready argument for why your candidate is more electable than the others is just common sense, and ultimately, the script is less about being negative towards Warren than trying to grab any contrast, no matter how small, to convince a voter that Sanders is more electable.

The good news is that both Sanders and Warren are reacting to this story by signaling their preference for a congenial contest, with Warren decrying "trashing" as a campaign tactic and Sanders saying, "No one is going to be attacking Elizabeth." Hopefully, they will be able to use Tuesday's debate to signal further that they want there to be a more sportsmanlike attitude this primary because, as Warren noted, we "all saw the impact of the factionalism in 2016, and we can't have a repeat of that."

One thing that can help prevent that kind of pointless factionalism is not letting Politico prey on our worst impulses in order to boost traffic. They did it again over the weekend with an article headlined, "Endangered Democrats sound the alarm on Bernie and Warren."

This time, the article is preying not on feminist fears that the Sanders camp has been taken over by sexists, but on the widespread fears, which appear to be driving Biden's lead in national primary polls, that Warren and Sanders are too progressive and will drive down turnout in 2020.

"House Democrats in battleground districts are anxious for a moderate to lead the ballot in 2020, warning that a self-described socialist like Sen. Bernie Sanders (I-Vt.) or liberal icon like Elizabeth Warren (D-Mass.) could hurt their own chances in the fall — and help reelect President Donald Trump," the article reads.

Unsurprisingly, the article has supporting quotes from members of campaigns for both Biden and Sen. Amy Klobuchar of Minnesota, another moderate who is currently sitting at 3% in the Morning Consult poll for the Democratic nomination. What it doesn't have is a lot of evidence, one way or another, for this argument that progressive policy positions are running off potential voters in swing districts. Instead, the article is driven primarily by fear, and the argument that because moderate Democrats are afraid, voters therefore should also be afraid.

Maybe these fears will turn out to be true. Maybe not, and those (like myself) who tend to believe voters are more interested in personality and candidate affect than dry policy debates will turn out to be right. The truth is, no one actually knows, and if they did, rest assured that information would actually get out there.

But one thing is certain: Letting these kinds of negative emotions like fear and tribalism and outrage drive the primary election cycle is bad news. I say this as someone who is a human being and vulnerable to these tactics. The reality is that all this intense negativity distorts people's abilities to make sound decisions and consider long-term consequences. The  best prevention  against these emotions is to actually read past headlines and think critically about who is saying what and what their self-interest might be.

And above all other things, remember: It's Trump, ultimately, who benefits when people are making decisions from a place of anger and fear.