"Very unusually, the leader of the Senate, Mitch McConnell, has signed onto a resolution to dismiss the case" 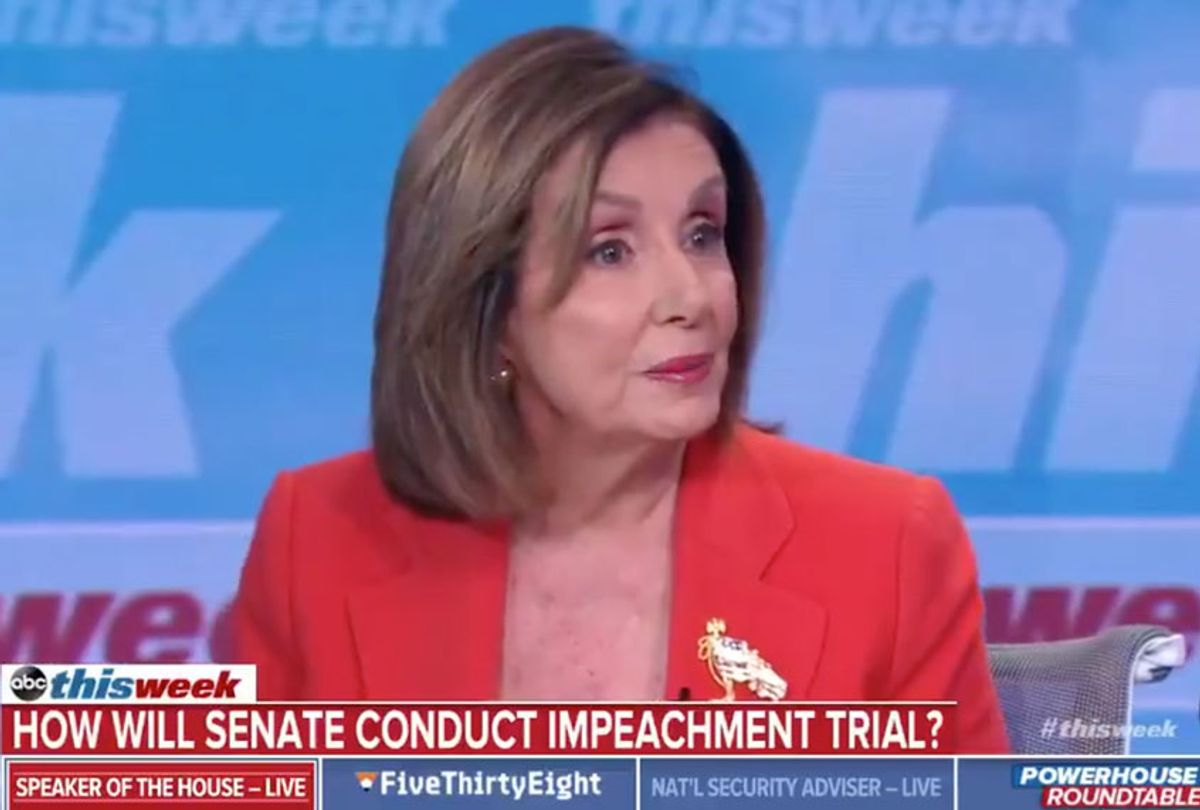 Speaker of the House Nancy Pelosi, D-Calif, claimed to ABC News chief anchor George Stephanopoulos that Senate Majority Leader Mitch McConnell, R-Ky., was engaged in a “cover up” after he signed onto a resolution that would dismiss the two articles of impeachment facing President Donald Trump.

“The fact is one of the things that I think is really important — and what I think people should be very aware of — very unusually, the leader of the Senate, Mitch McConnell, has signed onto a resolution to dismiss the case,” Pelosi told Stephanopoulos.

“Dismissing is a cover up," Pelosi repeated twice. "If they want to go that route again, the senators who are thinking now about voting for witnesses or not — they will have to be accountable for not having a fair trial.”

Pelosi said Friday that she would send the articles over this week, while CNN reported that Republicans do not have sufficient votes for their dismissal.

In December, McConnell said there would be “total coordination” between the Senate and the White House during the impeachment trial, adding that “there will be no difference between the president’s position and our position as to how to handle this.”

One of the most influential Senate Republicans, Lindsey Graham of South Carolina, also said: “I'm not trying to pretend to be a fair juror here. What I see coming, happening today is just partisan nonsense."

The president stands accused of withholding $391 million in military aid to Ukraine in order to compel the foreign power to open separate investigations into the Democratic National Committee and former Vice President Joe Biden, one of his chief rivals in the 2020 presidential election. There is no evidence to substantiate either conspiracy theory.

Laurence Tribe, a professor at Harvard Law School, told Salon by email at the time that McConnell’s position was analogous to that of “a prosecutor about to obtain a grand jury indictment [who] learns that the foreman of the trial jury (whose members, for purposes of this thought experiment, we’ll have to assume are known in advance, as is the case with the Senate though not in the typical criminal case) has threatened to let the accused decide how the trial will be conducted — and has intimated that it will be a ‘trial’ in name only, one orchestrated in close coordination with defense counsel. Other key jurors also announce that they don’t intend to listen to any evidence but have already made up their minds to acquit.”