"The New Pope" is still sexy and it knows it

Everything you loved about "The Young Pope," only now with John Malkovich in mascara 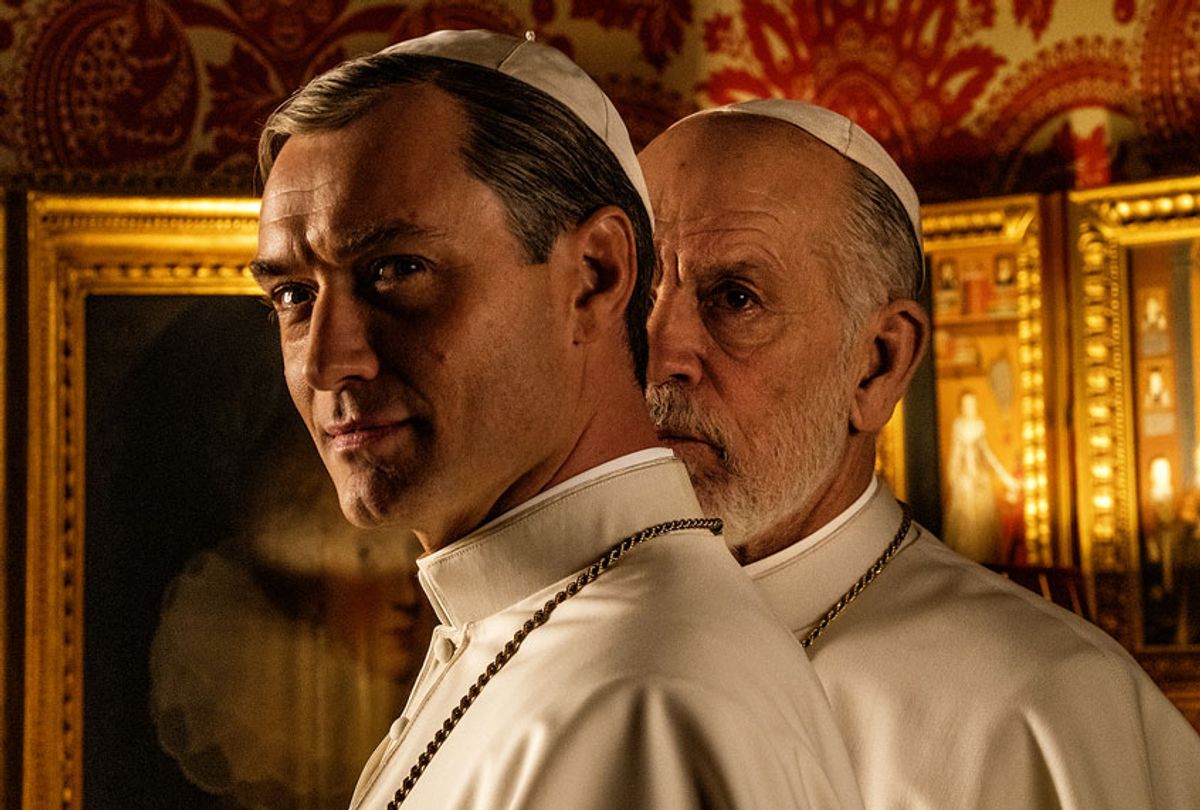 The Year of Our Lord 2019 yielded a most beautiful meme, a two-word phrase whose very utterance was enough to evoke rapturous sighs and flushed cheeks: Hot Priest. Praise be to the divine magic of "Fleabag" and its unconventional romantic lead, a culmination of Phoebe Waller-Bridge's virtuosity and Andrew Scott's inspired performance.

Never forget that Jude Law achieved a similar level of fluster in 2017 with "The Young Pope," the HBO series that became a hit meme before it debuted to mixed acclaim and positive audience befuddlement. General response to each episode tended along the lines of, "I . . . watch it? It's . . . good?" People who loved it connected to its weirdness; art nerds who favor turtlenecks and superfluous scarves could extemporize about the various scenes and passages inspired by masterworks of the renaissance.

And this doesn't necessarily mean Paolo Sorrentino, a filmmaker whose style leans more high art as opposed to high concept, did not succeed in his aims. He did. What is a viral meme featuring a handsome actor wearing holy garb and flaunting his sex appeal as a part of everything those robes imply, not as contrast – if not an artistic feat?

Law's Lenny Belardo, Pope Pius XIII, also happens to be the fictional pope best suited to 2017.  "The Young Pope" premiered right around Donald Trump's inauguration, and his "America first" declaration was in tune with the opinion of Pius XIII that the Vatican and the Catholic Church needs to distance itself from the public as opposed making itself more available.

But if you look closely at that season's narrative refrain, it did not substantively evolve or build from that starting point. The trick Sorrentino pulls off, and it's a terrific one, is that a person would have to see beyond the dazzle and seduction of the ways that the filmmaker broke and remolded the TV form and expectations to create a popular performance art.

Law and his cast, including Silvio Orlando's Cardinal Angelo Voiello and, in that season, Diane Keaton, based their performances on tone and color foremost, allowing the audience to infer psychology and emotion onto their work. In doing so they brought attention to the fact that the actor, his or her lines and what they pour into giving them voice, is part of an overall collage. The humans are one piece of the artistic medium, made equal players to the lighting, the space, the props. Together they become the artwork.

As far as its ending, "The Young Pope" felt complete, signed and hung up on wall. Pius had a heart attack, collapsed, and the camera's perspective flitted off to Heaven.

Our collective yearning to merge the carnal with the holy is quite a force, however; hence we now have "The New Pope."

Admittedly, as you might have picked up by now, I'm probably not the audience for "The New Pope." Obviously it exists for fans of "The Young Pope" seduced by the first go and hungry for another painting. Sorrentino, who directed all of the episodes and wrote them with the help of Umberto Contarello and Stefano Bises, provides them just that with a story that continues the theme without saying much that is new or unexpected.

Law's Pius is now in a coma presumed to be permanent, and the series opens with a nun carefully sponge-bathing his naked form, her face heated with lust; she's visibly conflicted by her duty and her closeness to handsome celebrity flesh. With balletic precision she backs away and reclines down on a nearby piece of furniture – laying with him, but not, chaste and yet reaching up to heaven with one, two, three fingers.

This is before Sorrentino's opening credits featuring nuns first seen as prayerful and heads covered, writhing around a cross to Sofi Tukker's "Good Time Girl," their hair set free. The group's Mother Superior, by the way, is a little person. Just because.

The focal point of "The New Pope" (other than Cécile de France Sofia Dubois, the church's sensualized head of marketing and official visual stimulation for onanists) is John Malkovich's John Brannox, a reluctant stand-in for the comatose Pius. Upon his ascent Brannox takes the name of Pope John Paul III. And Brannox, an intellectual who has spent his adulthood sequestered away from the affairs of the Vatican, is a man who preaches amity and acceptance and "middle way" as the direction the church should take, in marked contrast to hardliner Pius.

(Between Pius and John Paul, the papal conclave elects a Franciscan who at first shudders nervously at answering the call. Soon afterward he calls for a complete dismantling of the systems that prop up the Church, and soon after that he suddenly and comically drops dead.)

To modern Catholics and the drama's conclave of cardinals, the name he selects implies a continuation of John Paul II's philosophy of openness and reform. But the writers soon show that this pick is as problematic as Belardo, if not moreso. Pius XIII has a vision to offer; John Paul III can only offer an attitude that most charitably can be characterized as laissez faire. He's more interested in pressing the flesh with modern gods – celebrities – than updating a crumbling institution associated with retrograde belief. And Malkovich, a master of wrapping malaise in velvet and a silken dialogue delivery, makes his performance sing.

Ergo, "The New Pope" is a gorgeous, crisply stylized replay of "The Young Pope," trading its commentary on conservative hypocrisy and corruption in the church for a prodding at the illusion that a liberalist viewpoint might bring about a better way. Law is something akin to spirit, holy or otherwise, appearing throughout the season in dreams and ruminations, quite literally haunting these episodes and John Paul III's tenure.

Beyond this, the drama seems mostly concerned with maintaining its level of aesthetic precision and the pleasure that brings to the eye. But it doesn't necessarily pluck at the mind in innovative ways or seal itself upon the heart, qualities every great drama should live up to.  Then again, one person's rapture is another's purgatory, and in the way of all faith, the value of "The New Pope" is debatable and open to interpretation.