CNN's star tried to bait Democratic candidates into talking tough on endless war. Amazingly, none of them did it 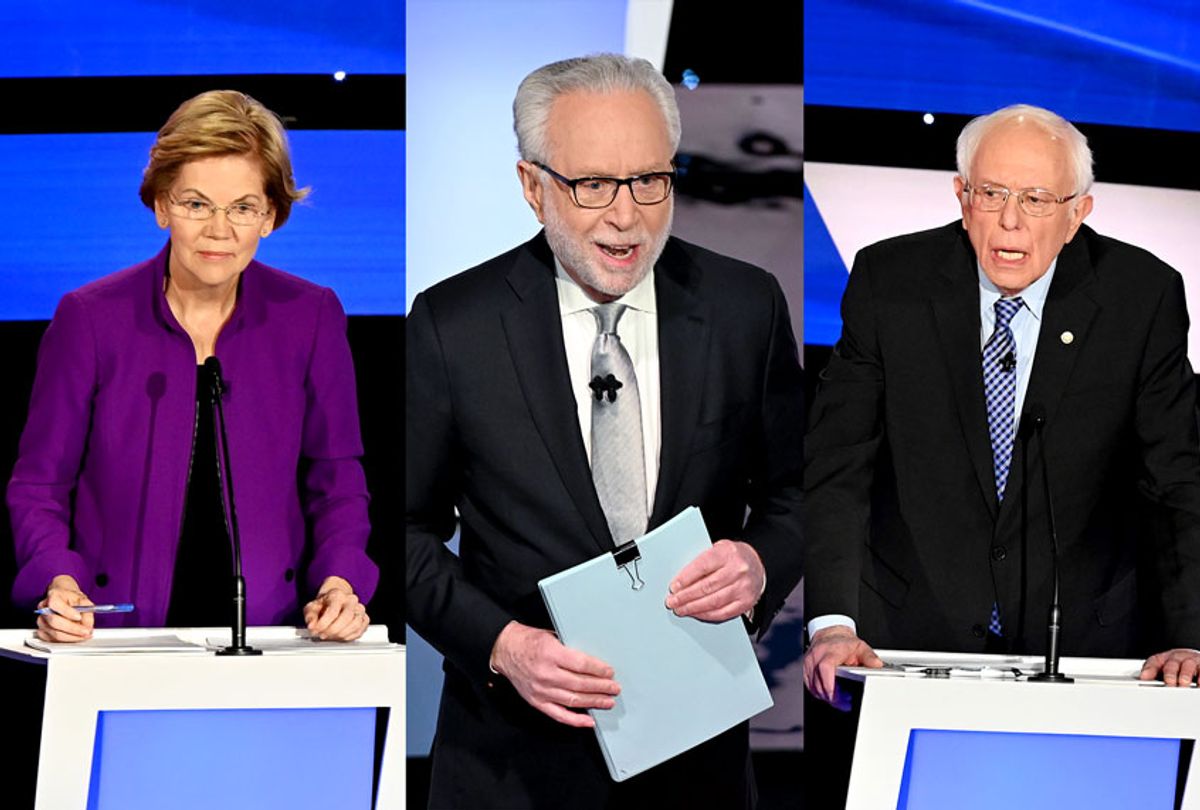 CNN thrives during times of war, so it was no surprise that face-of-the-franchise Wolf Blitzer launched into Tuesday night's Democratic presidential debate with a melodramatic question about which candidate is best prepared to be commander in chief of a nation on the brink of war.

"So let's have the debate right now!" he intoned.

And while most journalists covering the debate seemed to find a thwarted handshake a more compelling subject, I would argue that the candidates' response to Blitzer's provocation represented a historic moment in American politics.

Rather than rise to Blitzer's bait and argue about who is tougher and more aggressive, the candidates – collectively, and without exception – laid out a compelling case against rash U.S. intervention and going to war under false pretenses or without congressional approval.

This is a big change. Twelve years ago, Barack Obama and Hillary Clinton argued over which war was the most essential to win (Obama said Afghanistan, and proceeded to send more American servicemembers to their deaths there than Bush had.) Four years ago, Clinton embraced (figuratively and literally) the hawkish Washington foreign policy establishment.

In 2002, when the Congress was debating whether or not we go into a war in Iraq, invade Iraq, I got up on the floor of the House and I said that would be a disaster, it would lead to unprecedented levels of chaos in the region. And I not only voted against the war, I helped lead the effort against that war.

Just last year, I helped, for the first time in the modern history of this country, pass a War Powers Act resolution, working with a conservative Republican, Mike Lee of Utah, which said that the war in Yemen, led by Saudi Arabia, was unconstitutional because Congress had not authorized it. We got a majority vote in the Senate. We got a majority vote in the House. Unfortunately, Bush [sic] vetoed that and that horrific war continues.

Joe Biden, despite a hawkish past he now denies, also used dovish rhetoric:

I know what it's like to send a son or daughter, like our colleague has gone to war in Afghanistan, my son for a year in Iraq, and that's why I do it very, very reluctantly. That's why I led the effort, as you know, Wolf, against surging tens of thousands of troops into Afghanistan. We should not send anyone anywhere unless the overwhelming vital interests of the United States are at stake. They were not at stake there. They were not at stake in Iraq. And it was a mistaken vote.

When Blitzer tried to turn Sanders' vote to support the use of force in Afghanistan into a gotcha, Sanders schooled him:

Well, it's a little bit of a difference. On that particular vote, every single member of the House, including myself, voted for it. Only Barbara Lee voted against it.

But what I understood right away, in terms of the war in Iraq, the difference here is that the war in Iraq turned out to be the worst foreign policy blunder in the modern history of this country. As Joe well knows, we lost 4,500 brave troops. Hundreds of thousands of Iraqis died. We have spent trillions of dollars on that endless war, money which should go into health care and education and infrastructure in this country.

Amy Klobuchar, who spent much of the debate casting her opponents as naïve, didn't distance herself from them on this issue:

I wasn't in the Senate for that vote, but I opposed that war from the very beginning. In my first campaign for Senate, I ran against a Republican who ran ads against me on it, but I stood my ground. When I got to the Senate, I pushed to bring our troops home….

I think right now what we should be talking about, though, Wolf, is what is happening right now with Donald Trump. Donald Trump is taking us pell-mell toward another war. We have a very important resolution. We just found out today that four Republicans are joining Democrats to go to him and say: You must have an authorization of military force if you're going to go to war with Iran.

Elizabeth Warren used her turn to attack the often unspoken underlying dynamic that leads the U.S. to engage in war endlessly:

We have a problem with a revolving door in Washington between the defense industry and the Department of Defense and the Pentagon. That is corruption, pure and simple. We need to block that revolving door, and we need to cut our defense budget. We need to depend on all of our tools — diplomatic, economic, working with our allies — and not let the defense industry call the shots.

If you've been listening to this, what we are hearing is 20 years of mistakes by the American government in the Middle East, of failure, of mistakes. So the real question is judgment.

Blitzer returned with another biased question, implying that future troop withdrawals would lead to more terrorism. And again, he got an earful.

Sanders at first ignored the question:

[T]he two great foreign policy disasters of our lifetimes were the war in Vietnam and the war in Iraq. Both of those wars were based on lies. And right now, what I fear very much is we have a president who is lying again and could drag us into a war that is even worse than the war in Iraq.

The he reframed it:

To answer your question, what we need to do is have an international coalition. We cannot keep acting unilaterally.

And look what's happened. He went ahead — and it was predictable from the day he pulled out of the agreement, Trump, what exactly would happen. We're now isolated. We're in a situation where our allies in Europe are making a comparison between the United States and Iran, saying both ought to stand down, making a moral equivalence.

We have lost our standing in the region. We have lost the support of our allies. The next president has to be able to pull those folks back together, re-establish our alliances, and insist that Iran go back into the agreement, which I believe with the pressure applied as we put on before we can get done.

What's happened is, now that he's gone ahead, the president, and started this whole process moving, what's happening? ISIS is going to reconstitute itself. We're in a position where we have to pull our forces out. Americans have to leave the entire region. And quite frankly, I think he's flat-out lied about saying the reason he went after — the reason he made the strike was because our embassies were about to be bombed.

Warren spoke about how fighting isn't always the only solution:

You know, we have to stop this mindset that we can do everything with combat troops. Our military is the finest military on Earth and they will take any sacrifice we ask them to take. But we should stop asking our military to solve problems that cannot be solved militarily.

No one has a solution and an endpoint. We need to get our combat troops out. They are not helping create more safety for the United States or the region.

We can continue to remain engaged without having an endless commitment of ground troops. But what's going on right now is the president's actually sending more. The very president who said he was going to end endless war, who pretended to have been against the war in Iraq all along — although we know that's not true — now has more troops going to the Middle East.

And whenever I see that happen, I think about the day we shipped out and the time that was set aside for saying goodbye to family members. I remember walking with a friend of mine, another lieutenant I trained with, as we walked away, and his one-and-a-half-year-old boy was toddling after him, not understanding why his father wasn't turning back to scoop him up. And it took all the strength he had not to turn around and look at his boy one more time.

That is happening by the thousands right now, as we see so many more troops sent into harm's way. And my perspective is to ensure that that will never happen when there is an alternative as commander in chief.

Many tweeters pointed out Tuesday night that debate moderators never ask candidates how they will pay for weapons and wars, but almost always do for progressive programs. Sanders closed the foreign policy discussion by turning that around:

Wolf, in America today, our infrastructure is crumbling. Half of our people are living paycheck to paycheck. Eighty-seven million people have no health care or are uninsured or underinsured. We got 500,000 people sleeping out on the streets tonight.

The American people are sick and tired of endless wars which have cost us trillions of dollars. Our job is to rebuild the United Nations, rebuild the State Department, make sure that we have the capability of bringing the world together to resolve international conflict diplomatically and stop the endless wars that we have experienced.

Three days after the Sept. 11, 2001, terror attacks, Rep. Barbara Lee was the only member of the entire Congress to rise in opposition to the authorization to use military force that has led to so much useless carnage in the ensuing years. She explained a few days later: "It was a blank check to the president to attack anyone involved in the Sept. 11 events — anywhere, in any country, without regard to our nation's long-term foreign policy, economic and national security interests, and without time limit."

On Tuesday night, leading Democrats celebrated Lee as a voice of reason. As the communications director for J Street tweeted: