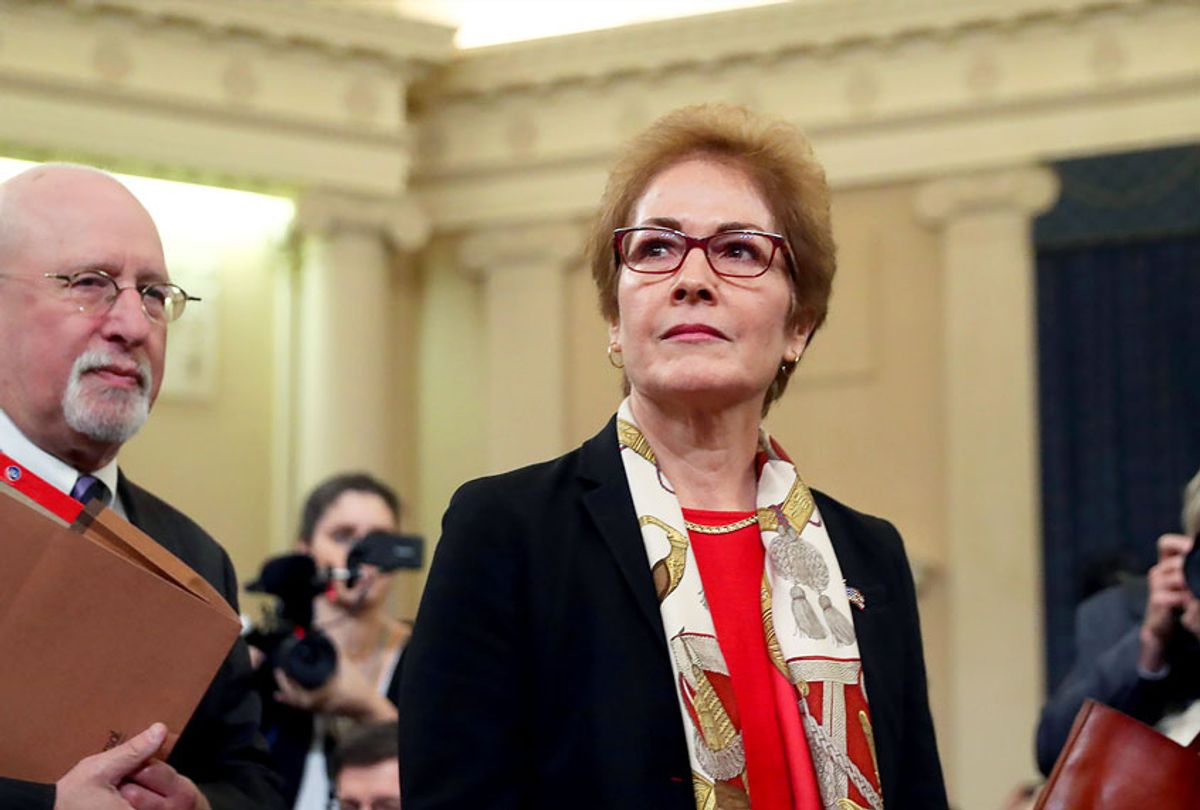 The Ukrainian Ministry of Internal Affairs announced the investigation in a news conference on Thursday, citing text messages showing "possible illegal surveillance" of Yovanovitch. The texts also suggested "her electronic gadgets were interfered by the private persons at the request of the US citizens," the agency said.

"Ukraine's position is not to interfere in the domestic affairs of the United States of America. However, the published references cited by the Washington Post contain a possible violation of the law of Ukraine and the Vienna Convention on Diplomatic Relations, which protects the rights of a diplomat on the territory of the foreign country," the agency said in a statement. "Ukraine cannot ignore such illegal activities on the territory of its own state."

The statement added that the agency reached out to the FBI for information and materials about "persons who may be involved in a possible criminal offense."

The announcement came after the Intelligence Committee released a trove of documents obtained from Lev Parnas, a former associate of Rudy Giuliani, that included text messages suggesting Yovanovitch was being watched during an effort to oust her from her post at the U.S. embassy in Kyiv. Other text messages in the document dump showed that a Ukrainian prosecutor pushed Giuliani to have Yovanovitch fired in exchange for information on Trump's political opponents. Giuliani later told The New Yorker he needed Yovanovitch "out of the way" to pursue investigations to help Trump.

The text messages show that Robert Hyde, a Trump donor who was running for a congressional seat in Connecticut, told Parnas details about Yovanovitch's location and movements in March of last year.

"Mr. Hyde … sent a series of text messages suggesting that he had Ambassador Yovanovitch under physical surveillance in Kyiv and that 'They are willing to help if we/you would like a price,'" House Intelligence Chairman Adam Schiff, D-Calif., said in a letter accompanying the documents.

"Wow. Can't believe Trumo [sic] hasn't fired this bitch. I'll get right in that," Hyde wrote. The texts show that Hyde told Parnas that Yovanovitch was "under heavy protection outside Kiev" and that "they are moving her tomorrow."

"The guys over they [sic] asked me what I would like to do and what is in it for them," he added.

"She talked to three people. Her phone is off. Computer is off," Hyde said in another text message, informing Parnas that Yovanovitch was "next to the embassy."

"They will let me know when she's on the move," he wrote. "They are willing to help if we/you would like a price," he added. "Guess you can do anything in the Ukraine with money."

Yovanovitch issued a statement through her attorney calling for an investigation into the text messages.

"Needless to say, the notion that American citizens and others were monitoring Ambassador Yovanovitch's movements for unknown purposes is disturbing," the statement said. "We trust that the appropriate authorities will conduct an investigation to determine what happened."

Hyde, who was hit with a restraining order last year for allegedly stalking another woman, according to The Intercept, claimed to Fox News that he was just "playing" in the text messages.

"We just had some colorful texts, had a few pops way back when I used to drink, and it's kind of unfortunate that the left ought to get their panties in a bunch," he said.

Asked if he "had eyes on Marie Yovanovitch," Hyde replied, "Absolutely not, are you kidding me?"

"I'm just a little landscaper from f**king Connecticut," he said.

Parnas dismissed Hyde as a "weird individual" in an interview with MSNBC's Rachel Maddow on Wednesday.

Parnas told Maddow he was never worried that Yovanovitch might be "in danger" because Hyde was "drunk all the time."

Parnas said he met Hyde at a Trump hotel bar but "didn't take him seriously."

"I didn't even respond to him most of the time," he added.

Parnas was indicted last year on charges that he illegally funneled foreign cash to Republicans, including a donation to then-Rep. Pete Sessions, R-Texas, in a bid to get him to lobby the Trump administration to oust Yovanovitch. The ambassador was abruptly recalled last May. Months later, Trump told Ukrainian President Volodymyr Zelensky that Yovanovitch was "bad news" and "she's going to go through some things."

Parnas told Maddow that he had claimed to Trump that Yovanovitch was bad-mouthing him.

"I don't believe it, and that's why I want to apologize for it," he said, adding that he and Giuliani only wanted her fired because she opposed the effort to get Ukraine to announce an investigation into the Bidens.

"That was the only motivation," he said. "There was no other motivation."