“The same tactics are being done to him what was done to our ancestors back during the Jim Crow day,” Diamond says 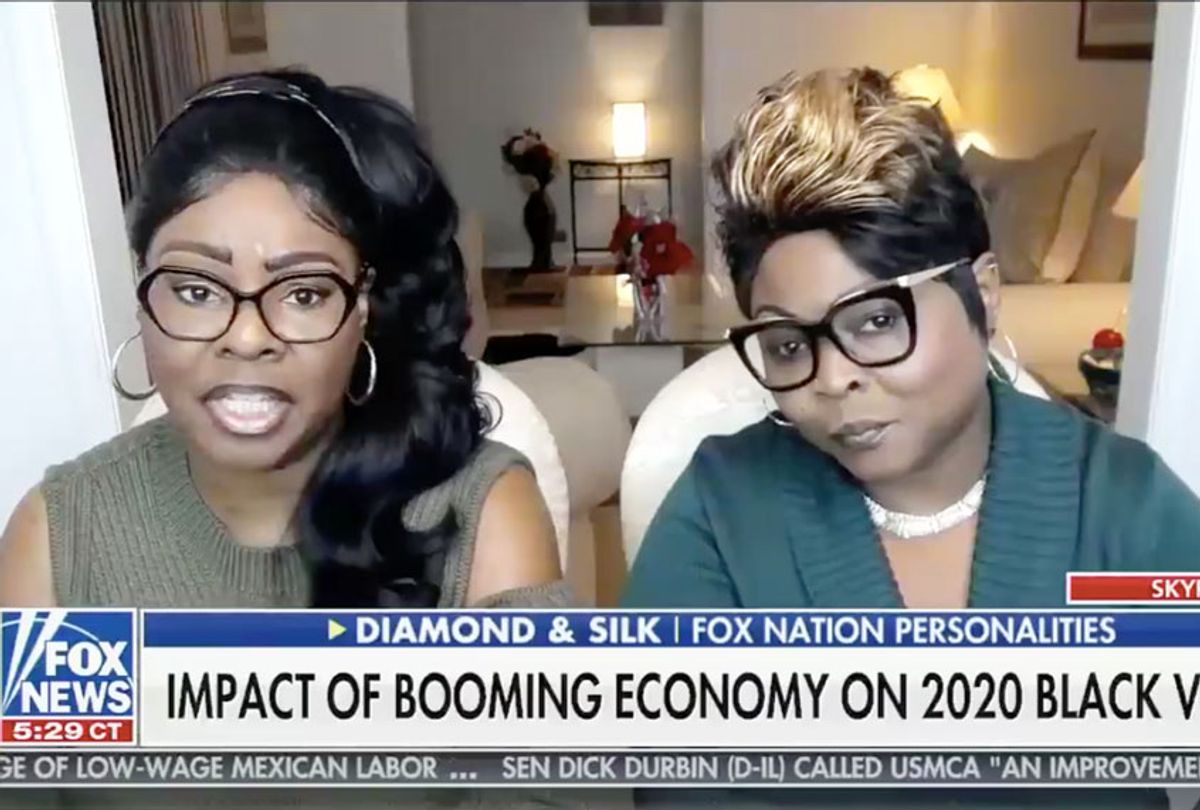 The Fox News commentators known as "Diamond & Silk" claimed on Friday's edition of "Fox & Friends" that Democrats were using the "same tactics" on President Donald Trump that were used on "our ancestors back during the Jim Crow day."

Lynnette Hardaway and Rochelle Richardson, who go by the names Diamond & Silk, also host their own show on the streaming service Fox Nation. The duo appeared on the president's favorite morning show to discuss a Wall Street Journal editorial that wondered "what if … enough black Americans voted for Donald Trump to re-elect him."

Hardaway argued that Democrats were "ignoring" low black unemployment numbers, because "they are expecting black people to fall in line."

She further claimed that Trump was being "railroaded" by Democrats in Congress.

"The same tactics are being done to him what was done to our ancestors back during the Jim Crow day," Hardaway argued.

"Diamond & Silk cheapen the memory of their own ancestors by comparing black people's struggles to overcome racism" to criticism leveled at Trump, Media Matters' Bobby Lewis reacted on Twitter.

She made a number of other factually baseless claims, asserting that Democrats were "sympathizing with terrorists" by voicing skepticism about Trump's justification for the assassination of an Iranian general and "advocating" for "MS-13 gang members," which has never happened.

"They don't like that," she said, referring to black voters. "We don't want your stuff for free, because free doesn't mean freedom. Free means that you're going to control us. And black people are going to be voting for Donald J. Trump."

"They want to keep their tax cuts," she said of a tax cut bill, which overwhelmingly benefited rich white people and corporations.

And she reiterated that black people do not like to see Trump "railroaded."

"They may not say nothing, but President Trump has supporters that you see and those that you don't see," she claimed.

Host Pete Hegseth complained that black Democrats did not hear anything about "what President Trump has done on the economy" at the Democratic debates — and questioned if some black Democrats were reconsidering their party affiliation.

"They're switching their party to Republican to vote for Trump," Hardaway claimed. "He's doing a lot of amazing things when it comes to minorities, especially the black community… There's an uprising going on in the underground."

"What do you mean underground?" host Steve Doocy asked.

"Listen, we talk to people when we go to airports, when we are out at events," she replied.

Richardson chimed in to claim that people were grateful that they did not have to wait "on food stamps from Obama, what he used to do back in the day." It is unclear if she thinks Trump ended food stamps, which he has not despite cracking down on benefits for struggling families and free lunch for school kids.

While it is certainly possible that people at "airports" have expressed support for Trump, Diamond & Silk do not represent the views of the overwhelming majority of black Americans, 88 percent of whom voted for Hillary Clinton in 2016.

A new Washington Post-Ipsos poll published just before Diamond & Silk's appearance on Fox News showed that more than 80 percent of black Americans believe that Trump is a racist. Ninety percent disapprove of his job performance.

"A 65 percent majority of African Americans say it is a 'bad time' to be a black person in America," The Post reported. "That view is widely shared by clear majorities of black adults across income, generational and political lines. By contrast, 77 percent of black Americans say it is a 'good time' to be a white person, with a wide majority saying white people don't understand the discrimination faced by black Americans."

You can view the Fox News segment below via Media Matters: