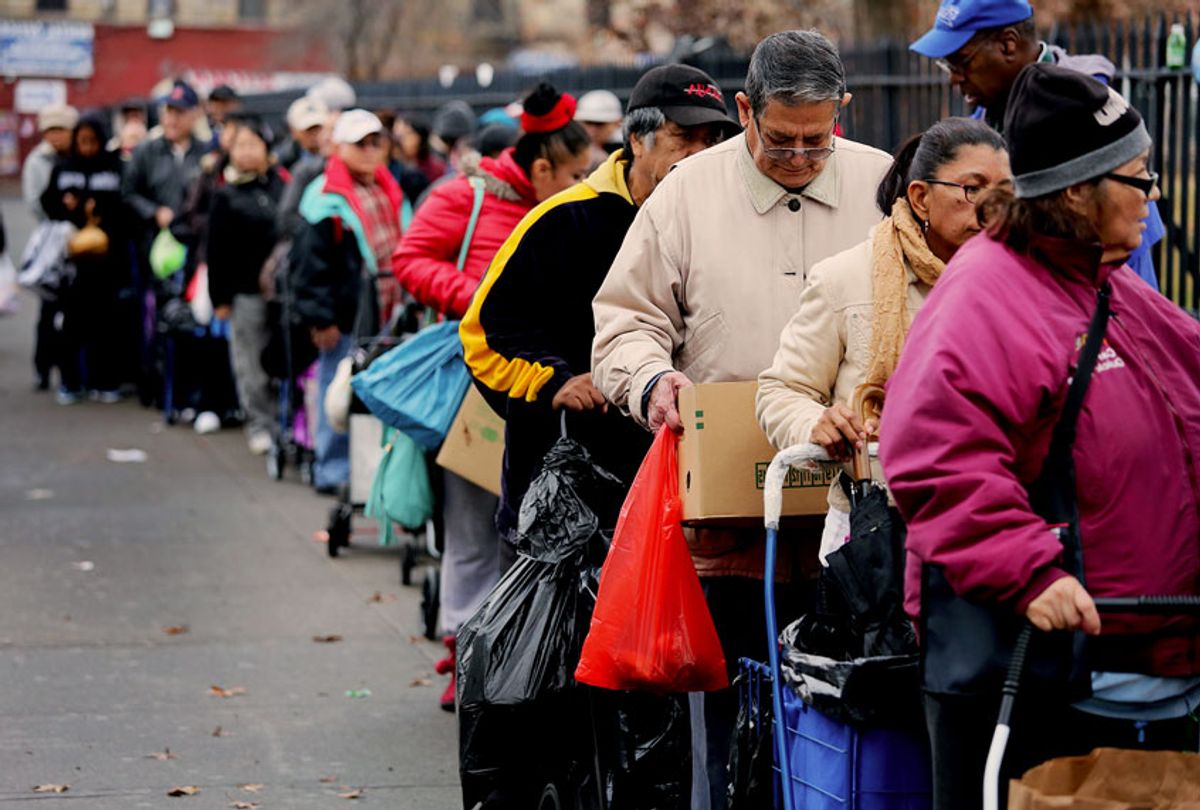 Brooklyn residents receive free food as part of a Bowery Mission outreach program on December 5, 2013 in the Brooklyn borough of New York City. The Christan ministry says it have seen a spike in need since food stamps to low-income families were reduced in November with cuts to the federal Supplemental Nutrition Assistance Program (SNAP). (John Moore/Getty Images)
--

The Trump administration’s proposed rule changes for the Supplemental Nutrition Assistance Program (SNAP) could cost millions of Americans their food stamps, according to a new study.

The Department of Agriculture’s proposed rule changes — which include setting stricter work requirements, reducing deductions for housing costs, and reforming automatic enrollment for the program in 40 states — could result in 3.7 million people losing their SNAP benefits, according to a report by the nonprofit Urban Institute.

The cuts would affect millions of households that would still remain eligible for the program. About 2.2 million households would have their SNAP benefits reduced by $127 per month and more than 3 million other households could see cuts averaging $37 per month, according to the study.

“What we found is that overall the three proposed changes would reduce the number of households participating in SNAP by about 11 percent if this was implemented in 2018," the Urban Institute’s Laura Wheaton told NBC News. "It’s about a 9.4 percent reduction in the number of people participating and about an 8 percent reduction in overall benefits.”

The Department of Agriculture estimates that the cuts would save about $4.2 billion per year. Agriculture Secretary Sonny Perdue said in a USA Today op-ed that the “proposed improvements” would “restore the dignity of work to the able-bodied” and ensure the “stability of SNAP for those who truly need it.”

Craig Gundersen, a University of Illinois at Urbana-Champaign professor who has studied the SNAP program for 20 years, said that the people targeted for cuts are the ones who truly need it. He told NBC News that half of the 3.7 million people at risk of losing their benefits are already food insecure despite receiving SNAP funding. Cutting the program for any food-insecure adult results in $2,000 in additional health care costs, he said.

"The essential goal of the program is to mitigate hunger and its consequences in the United States,” he told the outlet. "Anything that impedes SNAP of doing that is very problematic as it leads to food insecurity in our country."

Gundersen added that the new rules may actually discourage some people from working if the new rules put them in an income bracket that causes them to lose access to SNAP benefits.

Some states could see devastating effects if the rules are enacted. In Nevada, where more than 12 percent of households already face food insecurity, according to the USDA, upward of 22 percent of SNAP recipients could lose their benefits under the new rules.

“SNAP is related to hunger and getting people the nutrition they need,” the Food Bank of Northern Nevada’s Joselyn Lantrip told NBC News. “Food shouldn’t be a luxury.”

Lantrip added that food banks like hers would not be able to feed the millions of people who could be left without benefits under the new rules.

“That’s really hard for food banks to keep up with if you have that kind of decline in benefits,” she said. “We support people if they fall outside of the safety net, but we can’t replace the safety net as a food bank. We’re spinning our wheels already, because when unemployment is low people assume hunger is low, but we’re just helping more working poor than before.”

The proposed rule change garnered 170,000 public comments, nearly all of them negative. A group of more than 70 U.S. mayors also condemned the proposed change in a letter warning that 80 percent of SNAP households include a child, elderly person or person with disabilities and that these cuts would also “harm local and regional economies.”

“Executive actions should not be used to hurt individuals, families, and communities,” the letter said. “Our nation cannot remain globally competitive if our children do not have enough to eat.”

“We need to actually be providing more opportunity for people to get the food that they need,” he said.