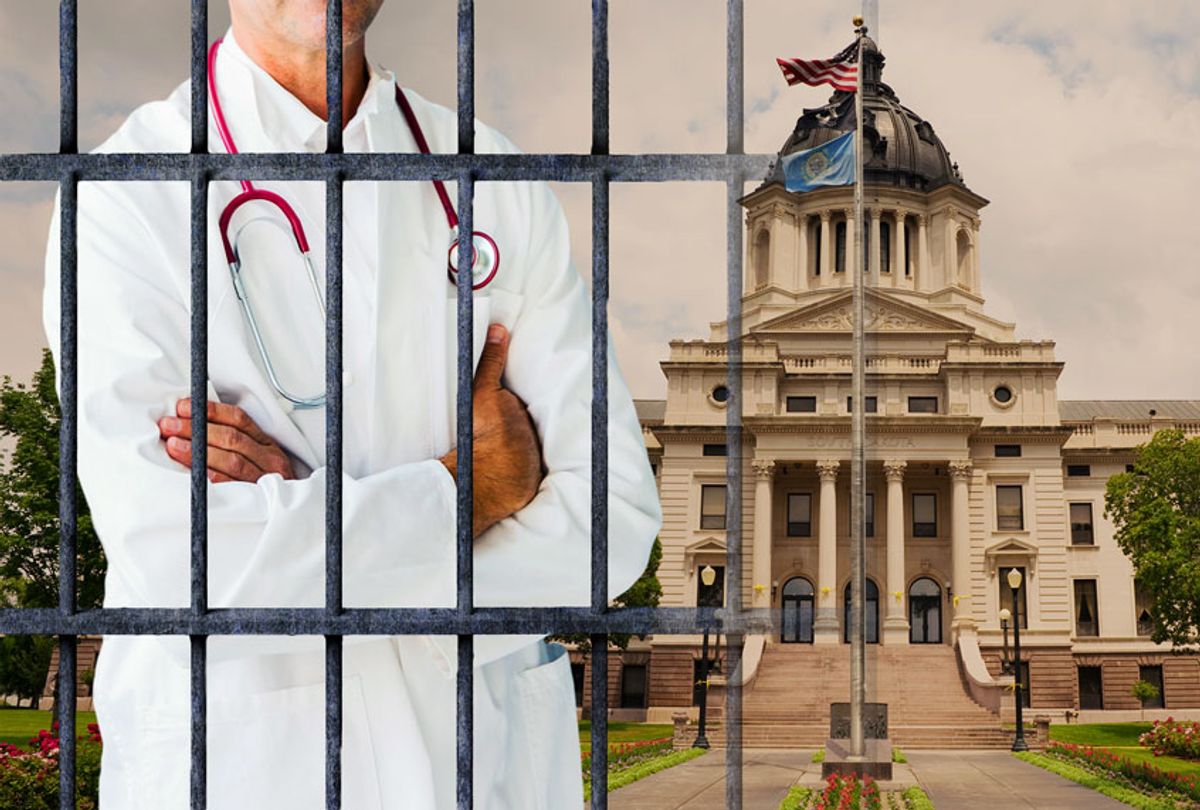 South Dakota Republicans rallied around a new bill this week that would jail doctors for up to a decade if they provide transgender health care to minors.

House Bill 1057 would make it a felony to prescribe puberty blockers and hormones to people under 18 years of age and bans surgeries like vasectomy and vaginoplasty.

The bill was introduced by Republican state Rep. Fred Deutsch and has already drawn more than 40 co-sponsors in the Republican-dominated legislature.

Deutsch, a chiropractor who previously co-sponsored a failed transgender "bathroom bill," told NBC News that the bill was his way to hit the "pause button" on "overwhelming and life-changing" decisions.

"Children need to wait until they're mature to do it," he said, arguing that the procedures and medications barred under the bill are "dangerous" because of the psychological and physical effects they have on young people.

Deutsch argued that the bill would not stop minors from being able to "socially transition" and would not apply to intersex minors or those with ambiguous gender characteristics, according to NBC.

The bill would make it a Class 4 felony to perform any of the procedures or prescribe medications listed in the bill to minors. Class 4 felonies carry a penalty of up to 10 years in prison, per the report.

Democratic leaders in the legislature vowed to oppose the bill but the party makes up less than 20 percent of both the state House and Senate.

Democratic Rep. Kelly Sullivan told NBC News that she was unaware of any medical centers in the state that provide these treatments for minors and argued that the bill would interfere with patient-doctor relationships and personal rights. Deutsch claimed to the outlet that he was aware of several instances in which doctors provided gender-transition treatment in Sioux Falls.

Harvard psychiatrist Dr. Jack Turban, who researches the mental health of transgender youth, told NBC that it is "unsettling to see state legislators proposing that standard medical care, as outlined by The American Academy of Pediatrics, The American Academy of Child & Adolescent Psychiatry and The Endocrine Society, should be a felony."

The Endocrine Society and World Professional Association of Transgender Health both recommend puberty blockers and hormone treatments for transgender teens, though both organizations also recommend delaying surgeries until 18 years old. The report noted that only a quarter of transgender and gender non-conforming adults have reported undergoing transition-related surgery.

The American Civil Liberties Union of South Dakota said in a statement to KSFY-TV that the bill is the latest attempt by the legislature to discriminate against young transgender people.

"Transgender kids, like all kids, deserve a chance to experience joy, to learn in a safe environment, to get the health care that they need, and to survive into adulthood," said the ACLU's Libby Skarin. "When the government proposes laws that would stigmatize them and undermine their care, they lose those opportunities."

"South Dakota was ahead of the curve," the Human Rights Campaign's state legislative director and senior counsel Cathryn Oakley told The Nation. "The anti-trans bathroom bill in South Dakota in 2016 was the first anti-trans bill to pass a house…. They're kind of a pioneer in anti-trans legislation."

Many of the bills were ultimately defeated or vetoed, though it has not stopped lawmakers like Deutsch from pushing new legislation.

"The spate of anti-trans bills in South Dakota and elsewhere in recent years reflects an intentional strategy on the part of the anti-LGBTQ right wing," wrote Gordon-Loebl. "Having lost the fight on gay marriage and recognizing the increasing national acceptance of lesbian gay and bisexual people, groups like [Alliance Defending Freedom] — alongside the Trump administration — have decided to pick off trans people, who are in many ways the most vulnerable and least protected members of the LGBTQ community."

Skarin told The Nation that battling these measures requires an "all hands on deck" approach.

"If we are going to continue to be successful in defeating attacks on LGBTQ people and trans people in particular," she said, "we have to take every single threat as an attack on the community as a whole and as something deserving of our attention."