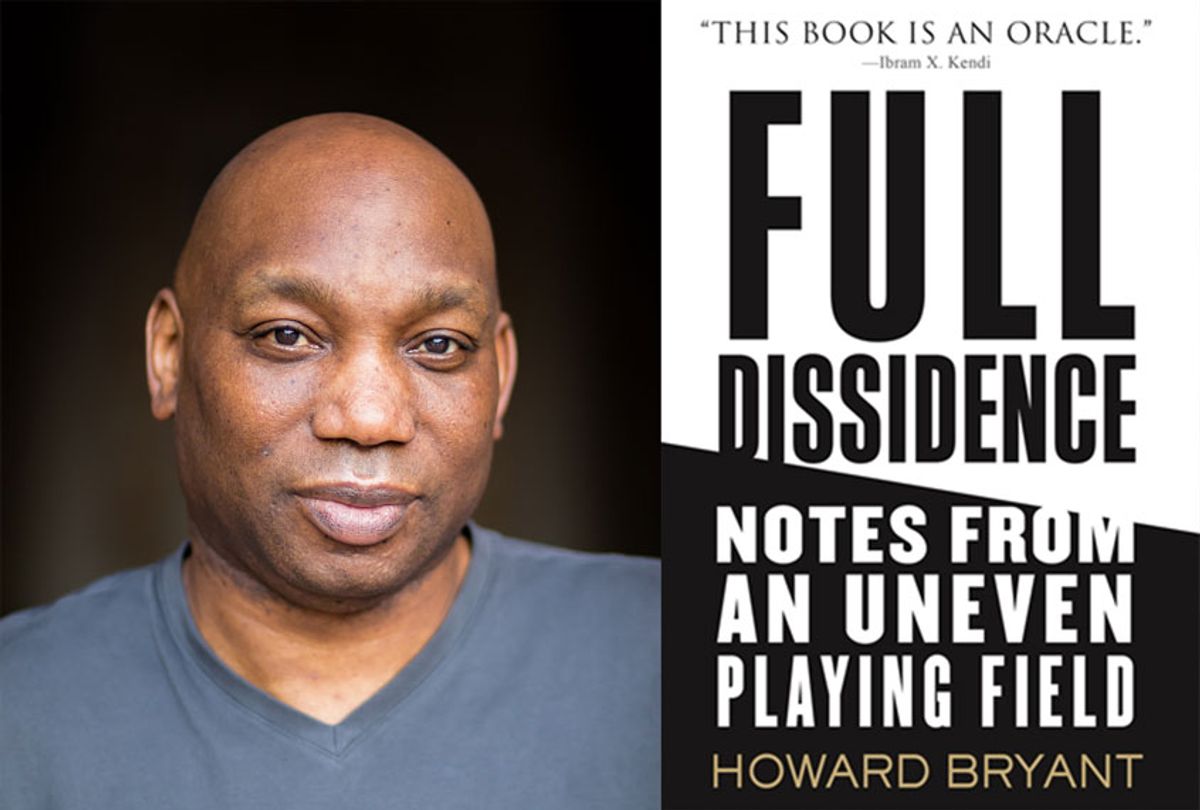 Excerpted from "Full Dissidence: Notes From an Uneven Playing Field" by Howard Bryant. Copyright 2020. Excerpted with permission by Beacon Press.

Once, appearing on ESPN to discuss the controversy of Colin Kaepernick not voting, I suggested that instead of his abstinence disqualifying his say on the American situation, perhaps he had gone "full dissident" and recognized the accepted framework of sociopolitical involvement—the ride-alongs with cops, the listening to candidates owned by money, the insistence that deliberate, institutional racism is just a misunderstanding still unsorted—and found them useless. I further argued that if he saw an unredeemed, corrupt system as the problem, there was no reason for him to trust in it and even less reason to expect him to participate in it.

Full dissidence may or may not have applied to Kaepernick, but it certainly felt personal. The thoughts were neither new nor revelatory, certainly not to me or any black person who reaches a certain age, a certain rage or breaking point, but they were nevertheless true: Donald Trump's installation as president was a proud and unhidden repudiation of the nation's first black president, and no matter how many attempts at misdirection toward economic anxiety or some other, greater complex phenomenon, some element of taking back proprietorship of the country had appealed to an overwhelming number of white people who voted for him. With Trump's lies and distortions normalized by an overmatched, often complicit free press, the writer Michiko Kakutani referred to his presence as "the death of truth." Dozens of books followed along similar themes regarding the decline of standards and accountability, but underneath so much of the apparent discontent, from Charleston to Charlottesville, is an anti-blackness, a reminder of to whom the country belongs. This was a reclaiming.

I do not say this hyperbolically, but Trump's election felt like a repudiation of a half century of black assimilation and aspiration to integration, of lifetimes of relationships, and of strategies and choices to better navigate the maze of white America. It didn't feel personal. It was personal. Something was dying, though at first I could scarcely pinpoint what, since I did not possess previously any great belief in this country's commitment to black equality, either on a state or personal level. In other words, I was already down following the election but I did not have far to fall.

But whatever lack of faith I may have possessed in the colorblind, Utopian future, millions of black families did believe in it, and they risked their children to the aspirational pathways, whether rooted in the Christian ethics of kindness and compassion or in the possibilities of education. Central to that belief was the strategy of moving their families away into hostile white communities of Milwaukee and Long Island, placing their children into hostile school systems in Boston or Denver, for the purpose of better. Acceptance. Citizenship. This was the endgame to the faith, and the twin acts of the triumph of the Obama presidency, the Trump corrective, and the proud amorality that followed killed it.

Black success, those who choose to listen know, has always led to white retribution, whether that success was something as revolutionary as Barack Obama addressing the crowd at Grant Park that night in 2008 or the unremarkable victory of an average black person scoring a decent job. What died was the belief that a day without white retribution was ever possible, replaced by the more immediate sentiment that it no longer mattered.

None of this, it should be noted, was theoretical. Some of my longtime white friends had already revealed themselves and decades-long friendships turned to dust. Skirmishes began as bee stings: the female friend I had known since seventh grade who told me in October 2008 that Sarah Palin was smarter and more qualified to be president than Obama; the thirty-year friend who before Trump's inauguration told me how "disappointed" he was in the civil rights icon John Lewis for calling out Trump's weakly coded racism. There were the progressive friends who, wounded and horrified by the election's outcome,had threatened to move to Canada, then in the next sentence dreaded the upcoming Thanksgiving dinner where they would have to listen to relatives revel in Trump's victory. It was as if all they had lost was a Super Bowl bet, but the decision to no longer sit at the table was rarely a consideration. These were no longer exchanges to be survived but telegrams urging a goodbye that needed to be listened to. Instead of anxiety, these departures were welcome, ballast being dropped.

Trump's election ended relationships and friendships, with family and romantic, and the referendum was not on him but on the dozens of millions people who voted for him, people whose lives, whether directly or indirectly would become part of mine. That the racism Trump promoted and condoned was occurring simultaneously with the ongoing demand that black people embrace postracialism as America's new reality represented an even greater insult for those sprinklings of black families living in predominately white communities.

That such reconsiderations were occurring nationwide, I had no doubt. I also had no doubt that the relationships it did not end made me more skeptical of the people involved, for both he and his election signified to me a stark and nonnegotiable collision of belief systems. For fleeting moments I even felt envious of those whites who could afford the luxury of being "apolitical"—of the world just not mattering that much—until I focused on the potential explanations: only whiteness and fealty to it could be strong enough to bond people of such disparate values, or those people really did not possess any values at all.

I, and the black people around me who were equally weary of this dance, did not have that luxury, and even if the number of friends who voted for Trump could be counted on one hand (at least the ones who volunteered their candidate honestly), they were not the only people who constituted my life, for they were connected by friendship, blood, and marriage to some of the sixty-two million other people who did vote for him. It was finally clear: what had died was negotiation.

By electing Trump they showed us who they were, just as the violent reaction in the 1970s by whites to black children desegregating Boston schools reminded my aunts and uncles exactly what white people had thought of them. "How much," my uncle would tell me, "they hated us." For the black families who lived in the white world, had bought the house and integrated the white community and its schools, had bought into the dream, the questions now stood even taller and more imposing. How many more Thanksgiving dinners could one be expected to sit through with one's white friends under the realization that not nearly enough questions had ever been asked of them? How, then, could one assess the people who have stayed by your side, the ones expected to attend your funeral? The ones with whom you have shared your holidays and your home and your bed and who, at any moment, could and would retreat—because, for white people, race is and always will be just a topic to either be addressed or ignored. Was it possible to trust the complicated relationships with white women, whose attitudes regarding interracial relationships seemed to be rooted in the attitude "If you're OK with me, everything's OK," yet who could always return to the comfort of whiteness when life with you got too tough?

What was being said in these relationships, in effect, was that white people wanted the benefit of loving someone black without confronting the conditions that make life difficult for black people. When white people would say to me, "I don't care if you're black," they were not being generous. They were not being progressive. They literally meant what they said. They did not care, and even if they did not mean it cruelly, they meant to say the historical, overwhelming conspiracy on the part of their country—by government, the judiciary, the financial and educational institutions, and by law enforcement—to ensure a black underclass was not enough (or was too much) for them. They might be sympathetic. They might not, but it was life, and however terrible they may have felt individually, they would do nothing more about it.

Doing nothing more about it did not only mean a willful misunderstanding of the black journey but an abandonment of the white people who were willing to risk their lives because they knew exactly the depth of the conspiracy and its inevitable destructiveness. The Andrew Goodmans and Michael Schwerners, William Lewis Moores and James Reebs, Viola Liuzzos, Bruce Klunders, and Heather Heyers on a national level and the few committed, important people of our anonymous lives were equally betrayed by this daily cynicism as much as any black person.

These friends and lovers, especially the lovers, sought to absolve themselves of guilt for their systemic advantages by loving the black person in their life—without risking anything to keep that person safe. They wanted to save themselves by appearing to save me, and as any black man who has dated a white woman knows, white women believe they can have both—all the preferential treatments and patriarchy of whiteness while believing in their inherent innocence. They could expose their black friends or lovers to their family's casual racism at Thanksgiving with no intention of risking their comfort, for the minority is always expected to willingly absorb humiliation as part of the privilege of the invite—but by doing this, the very people who pledged love for you with their words were sending another message by their lack of deed: they were always willing to sacrifice you.