America is in a state of moral and political crisis, and Donald Trump is at the center of it 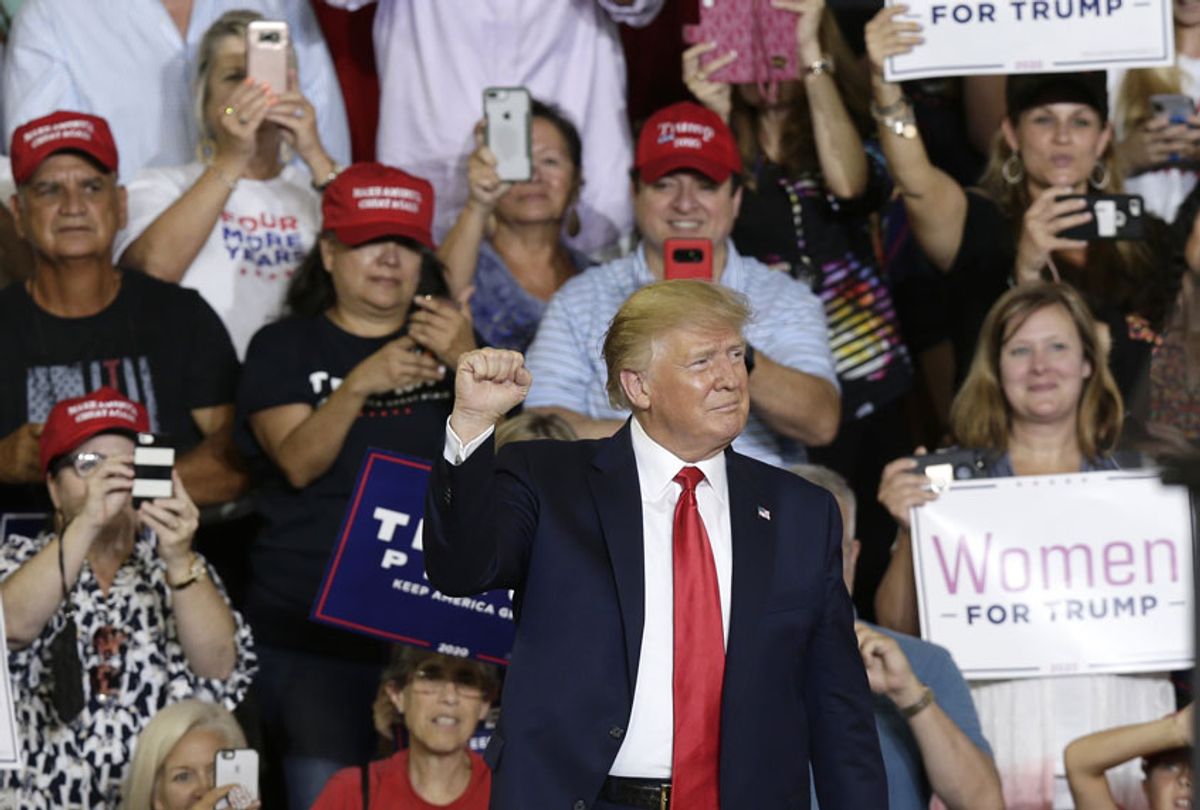 What more is left to say?

Another day, more angry young white men, more mass murders by gun, and all enabled and encouraged by a racist violent man named Donald Trump, his Republican Party and their news media.

On Saturday, a 21-year-old white supremacist drove nine hours from Dallas to El Paso, Texas with the goal of committing mass murder against Hispanics and Latinos who, like Donald Trump, the Republican Party and the right-wing media, he believes are "invading" and "poisoning" "his country." The alleged white supremacist terrorist accomplished his goal by killing 20 people and wounding 26 others in an attack on a Walmart and a nearby mall.

Then on Saturday night, a 24-year-old white man wearing body armor and armed with an assault rifle and a "double drum magazine" holding 100 bullets attacked a bar in Dayton, Ohio. He allegedly killed 9 people, including his own sister, and wounded 27 others. A motive for this rampage has still not been determined. Of note: six of the people slaughtered are black, 3 others are white.

The Sunday prior, a 19-year-old man who had shared white supremacist views on social media attacked the Gilroy Garlic Festival in Northern California. His attack left 3 people dead and 12 others wounded.

America is beset by a wave of white supremacist terrorism which has killed 23 people and wounded 38 others over the course of a week.

These are not mysterious happenings forced upon mere mortals by the gods. These are events which are knowable.

Violence is a force that gives the New Right meaning. Across Europe, the United States and other parts of the world this fascist movement has taken control of presidencies, parliaments and governments on both the local and national level. The New Right also deploys paramilitaries and street hoodlums to enforce its will against multiracial and multiethnic democracy in the name of "populism" and "nationalism."

When the New Right and its various supporters howl "race war!" (either those explicit words or its more "polite" variants that are used to make such sentiments palatable for "mainstream" consumption) they are not kidding. During the last eight years white supremacists have killed at least 175 people in attacks around the world.

It is clear that if dozens of Americans had been killed over the course of a week by ISIS, "leftists" or "black identity extremists" instead of by white supremacists that the full weight of the United States government would be brought down upon the terrorists. Instead, "hopes and prayers" are deployed against the evil-doers — largely because they are white right-wing terrorists.

In many ways this is predictable and expected: Donald Trump has shown himself through his words, deeds, and policies to be a white supremacist. Trump's closest advisers such as Stephen Miller share his beliefs.

It is also obvious that if the alleged El Paso mass murderer had been black or brown he would have been shot dead by the police. Unarmed black men and boys are viewed by America's police — and many white Americans en masse — as supernatural super villain-like threats which must be destroyed immediately. By comparison because whiteness is understood by White America to be inherently benign, good, safe, friendly and harmless, white men and boys who commit mass murder by gun are arrested with minimal if any force — even while the dead bodies still lay nearby. That both the Dayton and Gilroy shooters were shot by police is a rarity. Whiteness truly is the complexion for the protection.

Violence is a type of social pathology. A country's leaders can encourage the spread of violence or they can instead choose to try to stop it. Donald Trump and his regime have consistently chosen to do the first thing and not the second.

Donald Trump, his Republican Party and their news media use scripted violence and stochastic terrorism to encourage political violence against their "enemies" — usually nonwhite people, Muslims, Democrats, liberals and progressives, as well as reporters and journalists who are not affiliated with Fox News or other parts of the right-wing propaganda machine.

Trump supporters are especially compliant foot soldiers. Throughout Trump's campaign and now time in office, from the so-called "MAGA bomber" to now the alleged El Paso white supremacist terrorist, they have internalized the logic of weaponized white identity politics and then acted upon it with often lethal results.

The data does not lie: there has been a large increase in right-wing hate crimes since Donald Trump's campaign and now through to the third year of his presidency; counties which hosted Trump rallies saw at least a 200 percent increase in hate crimes, many of which have resulted in serious injuries and even death; in incidents across the United States Donald Trump's name and slogans have been summoned during hate crime attacks against nonwhites, Muslims, Jews, gays and lesbians and other marginalized groups; the FBI and other law enforcement agencies continue to report that terrorism by white supremacists and other right-wing groups and individuals is the greatest threat to the country's domestic security.

In total, right-wing political violence at present in America is a function of a feedback loop where what were once considered the extreme ideologies and beliefs of Nazis, white supremacists and other racial fascists have been mainstreamed by Donald Trump, the Republican Party, and the right-wing news media. State-sponsored violence is part of this feedback loop as well. Trump's ban on Muslims entering the United States, cruelty and thuggery by ICE and his other enforcers, and of course concentration camps for nonwhite refugees and migrants have long been the dream-nightmares of Nazis and other white supremacists. Trump's regime has made these dream-nightmares a reality.

We know that the mainstream news media, and too many reporters, opinion writers, and other political observers owe Hillary Clinton an apology. During the 2016 presidential contest she was hammered for daring to tell an uncomfortable truth about Donald Trump and his legion of "human deplorables" and the danger they represented to the United States and its multiracial democracy. Three years into Trump's regime it now appears that Hillary Clinton was too kind and modest in her assessment of Trump's character and that of his supporters.

America is exhausted by Donald Trump's regime and the political violence he has provoked and ultimately given permission for. America is also very sick in ways that predate Trump — but instead of trying to cure those social and political and cultural ills, Trump has chosen to make them much worse.

Through this state of collective exhaustion American fascism and authoritarianism take hold as a new type of normal. As part of that society-wide disease process, malignant reality replaces empirical reality. Surrender is made to feel rational. Thus, political fatalism about the present and future of American democracy gains a tighter grip on the minds and hearts and imaginations of the American people.

Historian Timothy Snyder describes this spiral in his book "The Road to Unfreedom" as, "To break the spell of inevitability, we must see ourselves as we are, not on some exceptional path, but in history alongside others. To avoid the temptation of eternity, we must address our own particular problems, beginning with inequality, with timely public policy. To make of American politics an eternity of racial conflict is to allow economic inequality to worsen. To address widening disparities of opportunity, to restore a possibility of social advance and thus a sense of the future, requires seeing Americans as a citizenry rather than as groups in conflict."

Snyder concludes with: "America will have both forms of equality, racial and economic, or it will have neither. If it has neither, eternity politics will prevail, racial oligarchy will emerge, and American democracy will come to a close."

What must good Americans do during this national emergency?

They must take a moral accounting of themselves. Are they resisting Donald Trump and what he represents? Or are they aiding and abetting it? Sides must be chosen. To be neutral is not a realistic or correct option.

They must understand that Trumpism — like other manifestations of fascism and authoritarianism — is both a moral and political crisis. Both emergencies must be addressed together.

They must know that to support Donald Trump and what he represents is to further stain the country's national character, and to choose to be the worst and not the best of what America can and should be. There are better angels and worse demons whispering in the ears of the American people. Will the American people choose the cruelty of the latter or the encouragements and exaltation of the former? This is the choice that the Age of Trump has repeatedly forced on the American people.

But perhaps there is an even worse possible outcome. It could simply be that many Americans in the Age of Trump have lost the ability to distinguish right from wrong, civic virtue from civic rot, a humane society from one that is cruel, good and evil from one another. If so then Donald Trump and his movement are the symptom of a much bigger problem in America — and not the root cause.

Who are the American people really? What will they do?