Hillary Clinton won’t commit to backing Bernie Sanders if he faces Trump: “Nobody likes him”

"He got nothing done . . . It's all just baloney, and I feel so bad that people got sucked into it," Clinton says 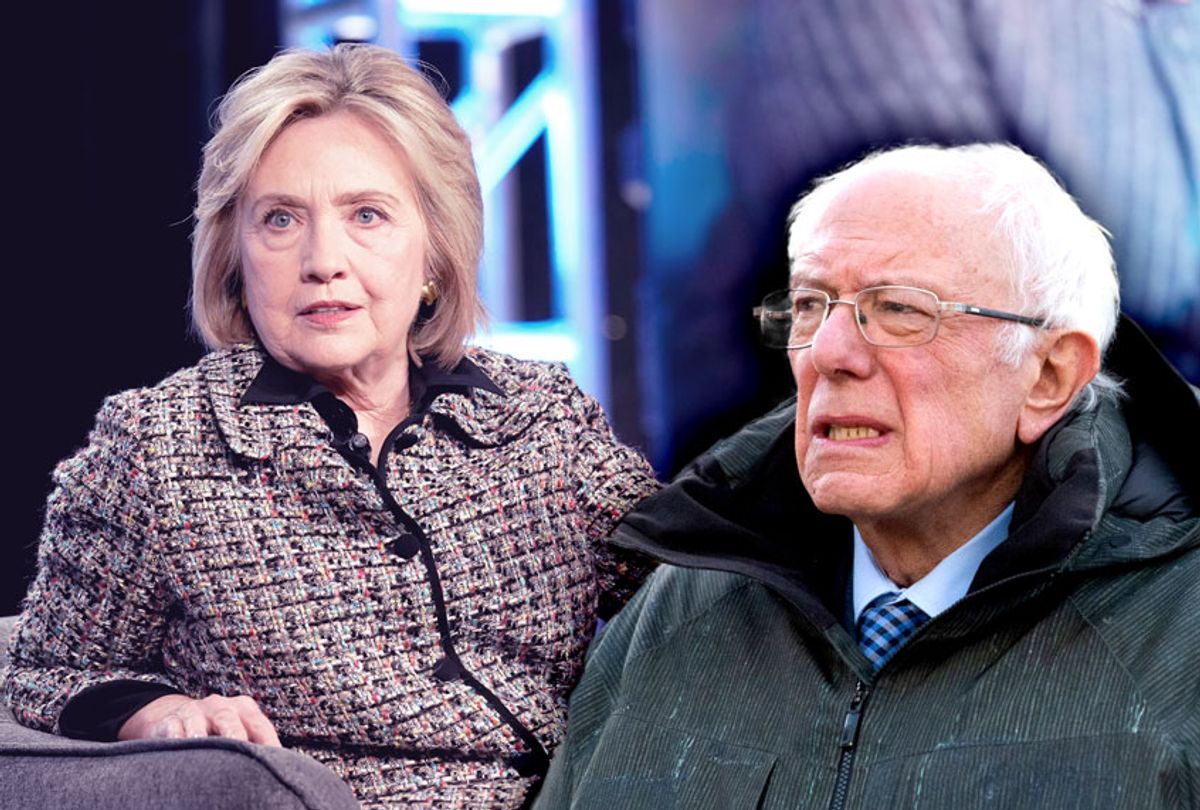 Former Secretary of State Hillary Clinton would not commit to endorsing Sen. Bernie Sanders, I-Vt., if he wins the Democratic nomination after harshly criticizing him in an upcoming documentary.

"He was in Congress for years. He had one senator support him. Nobody likes him. Nobody wants to work with him. He got nothing done," Clinton said in an interview for "Hillary," a four-part documentary series that will premiere on Hulu in March.

"He was a career politician. It's all just baloney, and I feel so bad that people got sucked into it," she added, according to The Hollywood Reporter.

Clinton told the outlet that her assessment still stands and declined to commit to supporting his candidacy if he faces President Donald Trump in 2020.

"I'm not going to go there yet. We're still in a very vigorous primary season," Clinton said. "I will say, however, that it's not only him, it's the culture around him. It's his leadership team. It's his prominent supporters. It's his online Bernie Bros and their relentless attacks on lots of his competitors, particularly the women. And I really hope people are paying attention to that, because it should be worrisome that he has permitted this culture — not only permitted, [he] seems to really be very much supporting it."

"And I don't think we want to go down that road again where you campaign by insult and attack," Clinton continued. "And maybe you try to get some distance from it, but you either don't know what your campaign and supporters are doing or you're just giving them a wink and you want them to go after Kamala [Harris] or after Elizabeth [Warren]. I think that that's a pattern that people should take into account when they make their decisions."

Sanders did not directly respond to Clinton's attack, telling NBC News' Geoff Bennet, "On a good day, my wife likes me, so let's  clear the air on that one Asked why Clinton was still talking about the 2016 election, Sanders replied, "That's a good question. You should ask her."

Washington Post reporter Dave Weigel pointed out on Twitter that diehard Clinton supporters known as PUMAs, short of "Party Unity My Ass," relentlessly attacked then-Sen. Barack Obama, D-Ill., and his supporters during his primary run against Clinton in 2008. And MSNBC's Steve Kornacki noted that 25 percent of Clinton primary voters later backed Sen. John McCain, R-Ariz., in the general election against Obama, a much higher total than the 10 percent of Sanders supporters who voted for President Donald Trump.

Clinton was also asked about Warren's claim that Sanders privately told her that a woman could not win in 2020, which Sanders vehemently denied.

"Well, No. 1: I think [that sentiment] is untrue, which we should all say loudly. I mean, I did get more votes both in the primary, by about 4 million, and in the general election, by about 3 million," Clinton said, echoing Sanders denial. "I think that both the press and the public have to really hold everybody running accountable for what they say and what their campaign says and does. That's particularly true with what's going on right now with the Bernie campaign having gone after Elizabeth with a very personal attack on her."

Clinton claimed that Sanders alleged comment was "part of a pattern" and appeared to lump him in with Trump.

"Then this argument about whether or not or when he did or didn't say that a woman couldn't be elected, it's part of a pattern," she said. "If it were a one-off, you might say, 'OK, fine.' But he said I was unqualified. I had a lot more experience than he did and got a lot more done than he had, but that was his attack on me."

"I just think people need to pay attention, because we want, hopefully, to elect a president who's going to try to bring us together and not either turn a blind eye or actually reward the kind of insulting, attacking, demeaning, degrading behavior that we've seen from this current administration," she added.

Clinton said that she "talked to practically everybody" who is running for the nomination except for Sanders. Her comments sparked intense scrutiny on Twitter.

"I cannot express how unhelpful this is," New York Democrat Lindsey Boylan said. "[Sanders] bears much responsibility for changing the narrative around what is possible in politics for a generation. Speaking as someone who grew up very much inspired by [Clinton], I genuinely don't get this choice."

"Lots of ink spilled on how 'Bernie Bros' will stay at home or vote Trump if it isn't Bernie. Hillary's THR interview a reminder of the reverse: 'centrist' Dems may stay at home or vote 3rd party (Bloomberg??) if Sanders or Warren are the candidate and deliver Trump a 2nd term," Intercept columnist Mehdi Hasan wrote.

"I was told harshly attacking potential Democratic Party nominees was doing Putin's bidding, what happened with that," The Appeal's Adam Johnson added. "These comments from Clinton are not only gratuitous and petty they achieve everything we're told sinister Russian disinformation does: Depress turn out, makes people cynical about politics, 'sow division.'"