No one weeps for the talls, I get it: But in air travel's legroom wars, we suffer

Are we "humans of height" demanding special treatment? No! But it'd be nice not to get penalized for our genetics 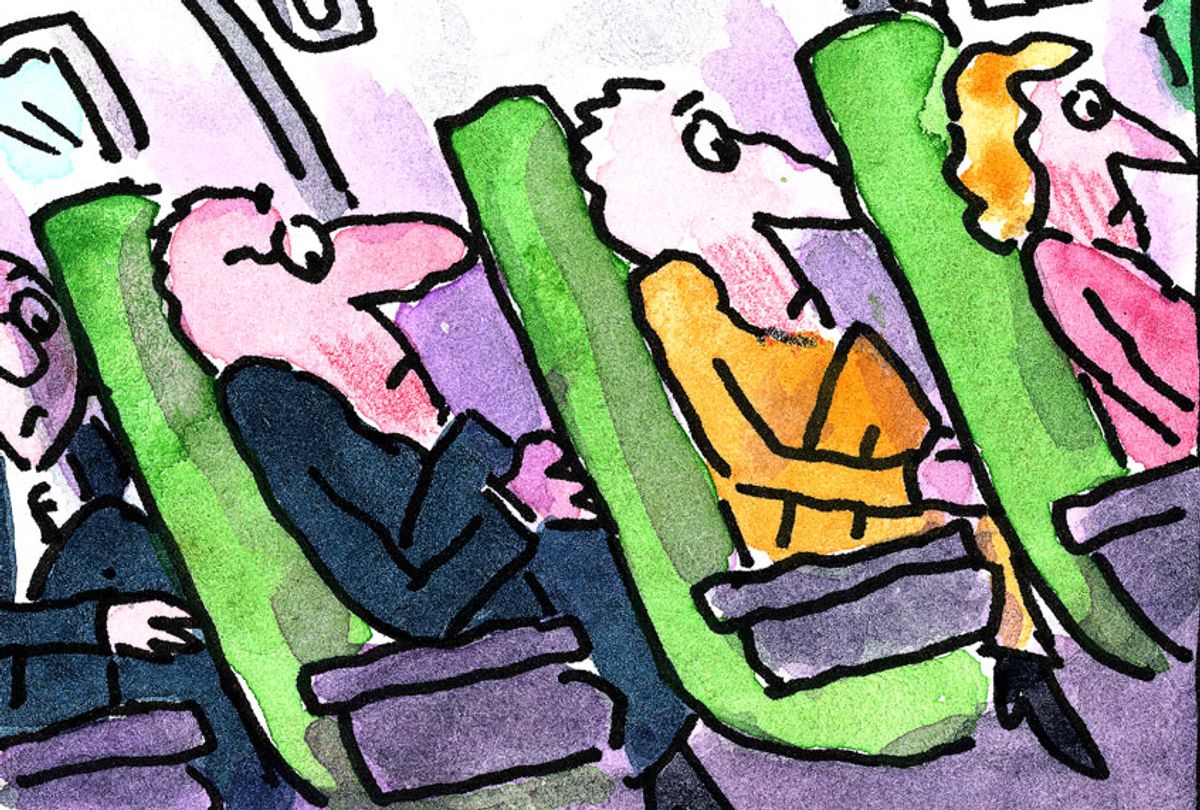 No one weeps for tall people. I get it. You'll never see tear-jerker television commercials scored with Sarah McLachlan music, lamenting the plight of tall people — our long-endured suffering due to possessing genetically larger frames than average humans. No one sees a tall person and chokes up at the sad spectacle: I bet she has trouble buying clothes, or I bet he has brain damage from hitting his head a lot. Nah. None of that happens. Nor should it. At the very worst, we get the usual, "Wow, you're tall!"

Most of the time, I'm happy to be 6'4". Friends and strangers alike tend to regard me as a natural leader, irrespective of whether I want (or deserve) to be. I seldom have to worry about not being able to see a movie screen or a concert stage. I'm blessed to be able to metabolize more carbs and calories before I start to see fat accumulation. Even though I'm terrible at basketball and other sports, people tend to assume I'm athletically gifted. And many of our most popular presidents were talls — hell, Donald Trump is rumored to wear lifts in his shoes and reportedly falsifies his height on his medical records in order to appear taller and therefore more dominant and authoritative.

Consequently, the shrinking legroom on airplanes isn't really an issue that'll convince Americans to take to the streets — rich people won't necessary scramble for their checkbooks to donate to activist groups and foundations to resolve the crisis. That said, there's a legitimate case to be made against the discriminatory practices of the major carriers as they add more rows of seats, reducing legroom to maximize the narrow profit margins commensurate with running an airline.

Regardless of height, we've all witnessed the slow-moving trash compactor that is an airline coach seat today, and we all know why it's happening. More seats equals more profit. According to USA Today, legroom has shrunk from an average of 34 to 35 inches decades ago to around 30 inches or less today. Some budget airlines, including Frontier and Spirit, shoehorn passengers into seats with legroom as dinky as 28 inches. (Jet Blue, to its credit, features the most legroom at around 32-33 inches.)

Ultimately, the legroom situation might be acceptable, or at least manageable, if it weren't for the perfect storm of shrinking legroom and the post-Y2K premium fees imposed by airlines for upgrading to exit row and "economy plus" seating.

Once upon a time, I could either book an exit row seat for the same rate as a normal coach seat, or I could hustle to get to the airport around two hours early and change my coach seat to an exit row before most passengers were checked in. These days, however, the airlines have monetized the extra legroom in exit rows, charging customers a premium for the space as well as the responsibility of assisting other passengers in case of, well, you know. Likewise, the neither-first-class-nor-coach "economy plus" seats are basically exit row seats without the accompanying emergency obligation.

On a recent flight to Denver, for example, I begrudgingly paid United Airlines an extra $92 to sit in an "economy plus" seat, and I resented it the entire time chiefly because I was paying more than a average-height passenger for relatively the same legroom. I was being penalized for my height. In order to fit, I had to pay $92 more than an average-height passenger, and the two- or three inches of extra legroom was literally the only perk included. The alternative was to sit in a coach seat, which I did on the way home — my knees excruciatingly wedged into the metal and plastic hinges of the armrests of the seat in front of me. The only relief from the crushing pain came when the seatbelt sign gratefully flickered on, which allowed me to sit slightly sideways in my aisle seat while foot traffic was minimal, with my legs temporarily obstructing the aisle.

My great fear in these scenarios, by the way, is when, the passenger in front of me reclines his or her seat, narrowing the legroom even further while completely embedding my body, origami-style, into my seat. And don't get me started on shorter people who snatch up the exit row seats, despite the fact that they fit perfectly well in ordinary coach seats.

Last week, before wheels-up, I tweeted to United Airlines a photo of my legs crammed into my seat. The airline's social media wrangler replied almost immediately (thanks!), suggesting that I ask a flight attendant whether I could move to another seat. Good suggestion — or at least it would have been, if flights weren't routinely stuffed to capacity these days. Put it this way: While there are rare exceptions, when was the last time you traveled on a flight that wasn't full? Overbooked flights are yet another cost-saving, profit-maximizing decision by airline executives (who clearly aren't tall people).

All told, talls have two options when flying: either we choose the extreme discomfort of a coach seat or we choose the up-charged "premium" seating. It's either pain in the knees or pain in the wallet — a choice average-height passengers don't have to contend with. I'm grateful that Congress might be looking into the problem, but I'm neither stretching my legs nor holding my breath given that there are certainly more pressing issues (pun intended) stacked up ahead of this one.

There's a reasonable solution available that shouldn't require congressional legislation. It's as simple as the measuring sticks used at amusement parks.

If a traveler happens to be taller than, say, six feet, he or she should have the option to ask for an upgrade to an available exit row or "economy plus" seat at no extra charge. In order to prevent scammers, passengers can be verified as tall enough at check-in using a simple analog device: One of those "you must be this tall" measuring sticks used at roller coaster and bumper-car rides.

The airlines already have contraptions to measure the size of your carry-on, so they ought to be able to handle the cost of glorified yardsticks. Come to think of it, iPhones come equipped with digital rulers — the free "measure" app located next to the clock and calculator apps. Once your height is officially recorded, it can be saved with your frequent-flier information for next time. If talls book well enough in advance, while exit row seating is available, we're in.

Are we asking for special treatment? Not really. Nobody thinks taller people should get free first-class travel, with hot towels, giant cookies and unlimited booze. We're only asking to fit in a seat with reasonable comfort without paying extra for it, which is the same level of service average-height humans enjoy in coach. It's simply the fair and non-discriminatory thing to do.

Meanwhile, during your next flight, if you're of average height or shorter, try pressing your knees into the armrest hinges of the next seat up. I mean it — just jam them in right in there. Then imagine being trapped like that for any longer than a few minutes. Now imagine being forced to pay extra to avoid that experience when no one else has to. That's exactly how tall people are getting screwed in air travel.

One more thing: If the airlines can implement a reasonable solution, providing an option for more legroom without being literally penalized for our genetic height, then we tall people will be less inclined to furiously elaborate, at great length, on the ridiculous lack of headroom in airplane bathrooms.