"This president to a lot of people is obnoxious," Brit Hume said to recall when thinking of impeachment as helpful 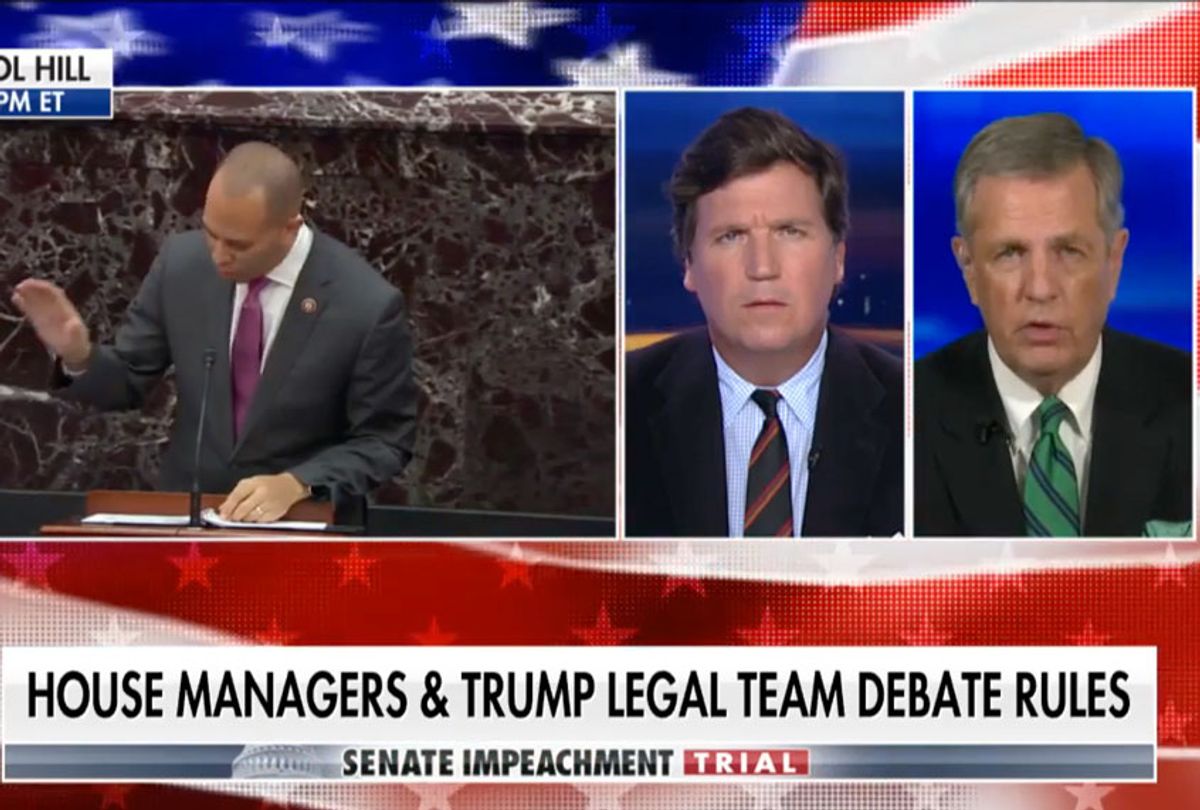 Brit Hume, the senior political analyst for Fox News, told his colleague Tucker Carlson on Tuesday night that he does not believe impeachment will help President Donald Trump's political standing, even though that is a popular conservative talking point.

"Well, it's possible," Hume said after Carlson suggested that Trump could benefit from a backlash against his impeachment, similar to what happened with former President Bill Clinton in the late 1990s. "But remember this: One of the things that we heard about Bill Clinton a lot — and we've heard about Donald Trump — is the accusation that he's a liar. Well, let's just assume for sake of discussion that he's a liar. So was Clinton. The difference between them was that Bill Clinton was a guy who could, you know, he could pee down your leg, and tell you it's raining and you'd believe him. He was likable. He was convincing, and so on."

Hume added that "as a teller of tall tales, I don't think Trump is as gifted as he is. And I don't think he's as popular. For example, a president with all this scandal that surrounded him — President Clinton, he had a great economy going and that buoyed his standing in a way that this great economy we have now does not seem to have buoyed this president's standing."

Hume pointed out that many people view Trump as "obnoxious," and though Clinton was not eligible to run for re-election in the contest after his impeachment (he was already in his second term), the Democrat who ran in Clinton's stead seemed to have been harmed by the impeachment controversy.

"It was Al Gore," Hume told Carlson. "And what did president Bush run on? He ran principally on restoring honor and decency. Or I forgot the exact words — honor, integrity or something like that in the Oval Office. That proved to be a winning message, and you can see why: It wasn't really about Al Gore. It was about Clinton."

A recent CNN survey conducted by SSRS found that a majority of respondents think that senators should vote to remove Trump from office. In addition, 69 percent of respondents — as well as 48 percent of Republicans — think new witnesses should be called during the trial.

Trump was impeached last month after it was revealed that he withheld $391 million in military aid to Ukraine while pressuring President Volodymyr Zelensky into opening investigations into his political rivals. The president has maintained that the two events were unrelated, though his critics have accused him of abusing the powers of his office. Trump is one of three presidents to have been impeached, with the other two being Andrew Johnson and Bill Clinton. Richard Nixon was almost impeached but resigned before that could happen.

Watch the full video below via Fox News: