Impeachment: So what happens now? Your relatively clear guide to a very murky process

Impeachment is in the Constitution — but it has few clear rules and a dubious history. Here's what we know 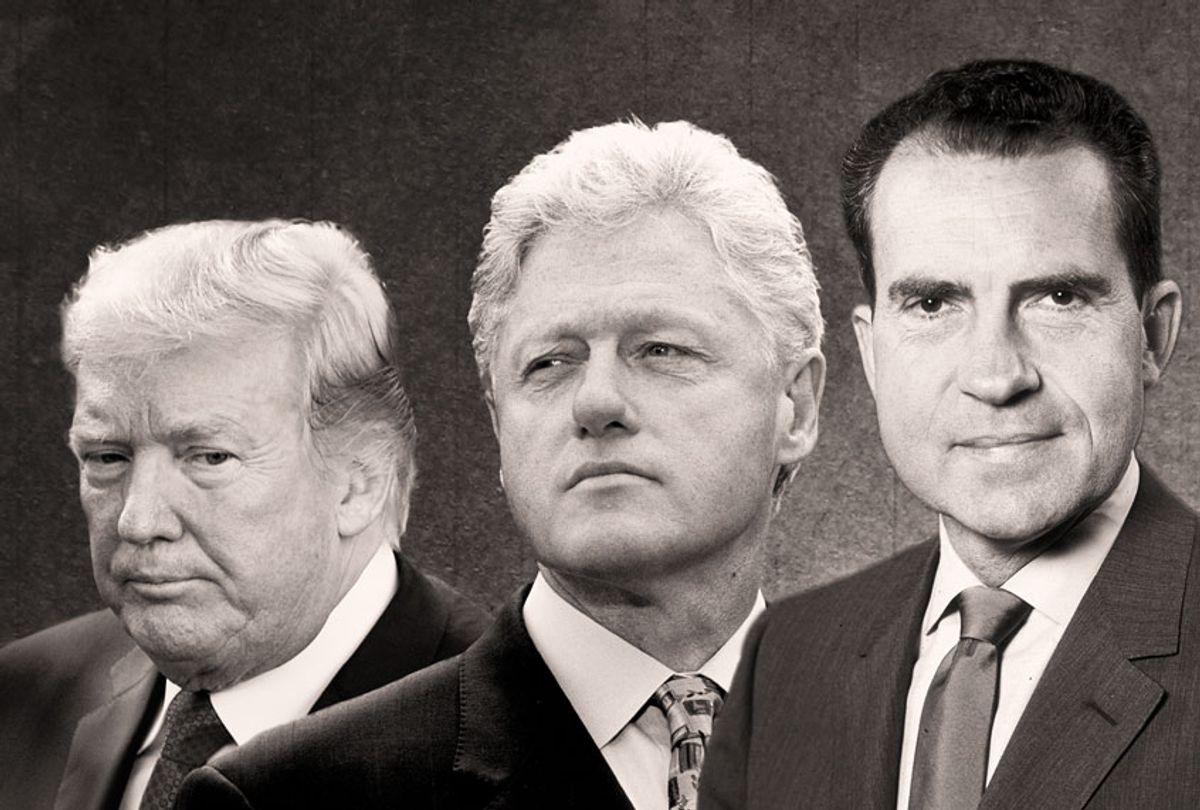 Last Wednesday evening, 229 House Democrats joined with a lone former Republican to impeach President Donald Trump. In that moment our 45th president became only the third to be formally impeached, as well as the fourth to face a likely impeachment trial. (More on that below.)

Let's see if we can break down, as objectively as possible, how impeachment works, what happened on the three previous occasions when a president faced impeachment, and how the Trump impeachment fits into the broader context of the Constitution and American history.

Article II, Section 4 states that "the President, Vice President and all civil Officers of the United States, shall be removed from Office on Impeachment for, and Conviction of, Treason, Bribery, or other high Crimes and Misdemeanors." Article I, Section 2 of the Constitution states that the House of Representatives "shall have the sole Power of Impeachment," while Article I, Section 3 states that "the Senate shall have the sole Power to try all Impeachments." It also requires that, in cases of presidential impeachment, the Chief Justice of the Supreme Court must preside, and that two-thirds of the members present must vote for conviction in order to remove the president from office.

So because a majority of the House of Representatives has voted to impeach President Trump, the Senate will (presumably) hold a trial on charges of abuse of power and obstruction of Congress, relating to Trump's apparent attempt to coerce Ukraine into opening a phony investigation into former Vice President Joe Biden, in exchange for the release of  $391 million of military aid that had been allocated by Congress. (Actions that, depending on who you ask, could be construed as soliciting a foreign bribe).

There's a wrinkle: At least for the moment, House Speaker Nancy Pelosi has not transmitted the articles of impeachment to the Senate, while she waits for Senate Majority Leader Mitch McConnell and Minority Leader Chuck Schumer to negotiate the rules of a trial. McConnell has made it clear he's not interested in a lengthy process, doesn't want any witnesses to testify and has no intention of sitting as an "impartial juror." How long this impasse may last is not clear, but it has provoked a legalistic dispute in which the White House has tried to suggest that Trump hasn't actually been impeached. (Spoiler alert: He has.)

Chief Justice John Roberts will preside over the trial, if and when there is one. Assuming all 100 senators are present, it would take 67 votes to remove Trump from office. There are 53 Republicans and 45 Democrats in the current Senate, along with two independents who caucus with the Democrats (Angus King of Maine and Bernie Sanders of Vermont). That means at least 20 Republicans would have to vote for conviction, assuming all the Democrats and Democrat-leaners do so.

Nobody, to put it mildly, thinks that's going to happen, given the extreme partisanship of contemporary politics. Nonetheless, Republicans have already given themselves a black eye by not even offering the pretense of fairness.

Here's what Alexander Hamilton had to say about the Senate's impeachment role in "The Federalist, No. 65":

The Convention thought the Senate the most fit depository of this important trust. Where else than in the Senate could have been found a tribunal sufficiently dignified, or sufficiently independent? What other body would be likely to feel confidence enough in its own situation, to preserve unawed and uninfluenced the necessary impartiality between an individual accused, and the representatives of the people, his accusers?

The "tribunal sufficiently dignified" has done this before, a number of times Since the ratification of the Constitution, three presidents (including Trump), one senator, one cabinet officer and 15 federal judges have been impeached. Of those 20 people, only eight (all of them judges) have been convicted and removed from office.

Johnson's impeachment provides a cautionary tale for those who want to impeach a public official simply because they dislike that person's policies. Because he was Abraham Lincoln's vice president when the 16th president was assassinated in April 1865, Johnson began governing America shortly after the end of the Civil War. While most Republicans wanted a proactive program to help the recently-liberated slaves and penalize the South, Johnson wished to turn the fate of the freedmen over to the former Confederate states — essentially laying the foundations for the Jim Crow era — and apply only minimal requirements for the formerly rebellious states as to rejoin the Union.

These policies were unquestionably racist and inhumane. But they weren't illegal, and most of Johnson's Republican critics knew that. As a result, they impeached Johnson for a number of spurious offenses, most of them violations of the Tenure of Office Act. That law was, for all intents and purposes, an impeachment trap: It prohibited the president from firing cabinet members without Senate approval, even though requiring such approval was a blatantly unconstitutional violation of executive power. After Johnson fired Secretary of War Edwin M. Stanton, the House worked with the Senate to quickly impeach and try the president. Johnson escaped conviction by one vote on May 16, 1868.

This was a fortunate outcome since, as Republican Sen, James Grimes of Iowa put it, "I cannot agree to destroy the harmonious working of the Constitution for the sake of getting rid of an unacceptable president." Republicans didn't need to impeach Johnson to get rid of him; he was massively unpopular and did not receive either the Republican or Democratic presidential nomination in the 1868 election. A Civil War hero, former Gen. Ulysses S. Grant, was easily elected, and Johnson has gone down in history as one of our two or three worst presidents. Is that foreshadowing? No comment.

Nixon was accused of breaking the law in order to improve his chances of winning an election. Does that sound familiar? In the 1972 election, Nixon's Democratic opponent was Sen. George McGovern of South Dakota. Although most polls showed Nixon with a decisive lead, his campaign was eager for inside information on the Democrats. In June 1972, a group of five burglars were arrested in the offices of the Democratic National Committee, located in the Watergate complex in Washington. Reporters Bob Woodward and Carl Bernstein of The Washington Post eventually connected one of the burglars to the president's re-election committee, setting off a chain of events that would destroy Nixon's presidency, despite his landslide victory over McGovern in November 1972.

There is one notable way in which the Watergate scandal stands in contrast with the Trump-Ukraine scandal today. Although Nixon's fellow Republicans were staunchly supportive at first, things changed when a "smoking gun" Oval Office recording revealed that the president had ordered a cover-up of his connection to the burglary. Not long after that revelation, Republican leaders from the House and Senate visited Nixon at the Old Executive Office Building in August 1974 and told him he could no longer rely on the unified support of his party. The House would certainly pass articles of impeachment — which had already been voted out of the Judiciary Committee — and the Senate was likely to convict him at trial.

Faced with public humiliation, Nixon resigned on Aug. 9, 1974. More than a century separated his near-impeachment from Andrew Johnson's impeachment — but it would be less than 25 years until the next one.

It's easy to minimize Clinton's crimes by saying that he was "impeached for getting a blow job," that's not entirely accurate. Clinton was impeached because he lied under oath during a sexual harassment lawsuit brought by a woman named Paula Jones when he was asked whether he'd had an extramarital affair with a different woman, Monica Lewinsky. (Clinton defended himself by arguing that his language, though misleading, had been technically accurate.) He was also accused of obstructing justice during the investigation of his conduct, including possibly tampering with evidence and instructing others to lie on his behalf. On Dec. 19, 1998 — almost exactly 21 years before Trump's impeachment — the House of Representatives impeached Clinton.

Clinton was acquitted by the Democratic-majority Senate, far more easily than Johnson had been. Senators split 50-50 on the obstruction of justice charge, and voted 55-45 against the charge of perjury. A large majority of Americans opposed Clinton's impeachment, and his approval rating hit 63 percent three days before the House vote. By contrast, a recent CBS News poll found that Americans favored Trump's impeachment by a margin of 46 to 39 percent, and measured his approval rating at 45 percent.

There is no question that Trump put a stop on $391 million of military aid that had been allocated for Ukraine, and that he asked Zelensky to open investigations — on flimsy premises or none at all — into Biden and the DNC. Democrats see this as obvious corruption and abuse of power. Republicans claim, in essence, that those actions were unrelated to each other: Trump was genuinely concerned about corruption in Ukraine, including the allegations about Joe and Hunter Biden, and never explicitly told Zelensky that Ukraine wouldn't get the military aid without such investigations.

Similarly, there's no question that Trump has refused to turn over numerous documents to Congress under subpoena, and has tried to prevent current or former administration officials from testifying. (Several State Department employees have testified in response to subpoena, disobeying Trump's orders.) Democrats have described this as an unparalleled pattern of obstruction, designed to prevent Congress from performing its constitutional oversight. Republicans claim the president has simply tried to protect himself from a baseless and blatantly partisan investigation, and wants the courts to decide all such questions of executive authority.