Former Salon columnist: "I did nothing more than do my job as a journalist — ethically and within the law" 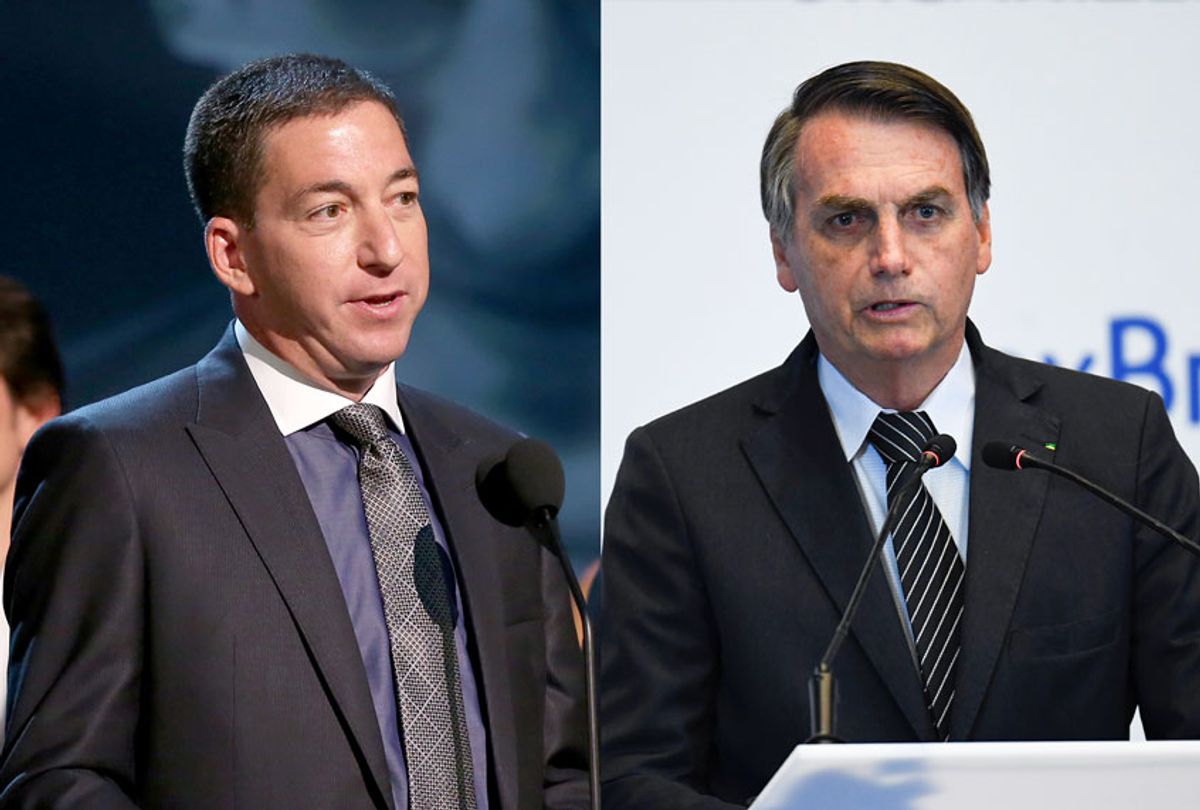 Greenwald, the co-founder of The Intercept and a former columnist for Salon and the Guardian, was accused of being part of a "criminal organization" that hacked the phones of multiple public officials and prosecutors in a 95-page criminal complaint on Tuesday, The New York Times reports. Prosecutors alleged that he aided the hackers, which Greenwald denied.

Greenwald, a staunch critic of far-right Brazilian President Jair Bolsonaro, published conversations involving Brazilian Justice Minister Sérgio Moro that showed Moro had coordinated with prosecutors while he was a judge overseeing a wide-ranging corruption allegation that led to the conviction of former President Luis Inácio Lula da Silva, paving the way for Bolsonaro's election. Moro, himself a popular far-right figure in the country, now serves in Bolsonaro's cabinet.

Prosecutors alleged in the complaint that Greenwald played a "clear role in facilitating the commission of a crime" because he urged the hackers to delete archives they shared with The Intercept Brasil to cover their tracks, according to the Times. Prosecutors said Greenwald spoke with the hackers while they were monitoring private chats. Six other people were charged in the complaint, including four who were detained last year in connection with the hacks.

Supreme Court Justice Gilmar Mendes issued an order last year banning the federal police from investigating Greenwald's role in the hacks. Prosecutors said on Tuesday they complied with the order but found new messages they claimed implicated Greenwald. The charges come after Brazilian federal police had issued a report clearing Greenwald of criminal conduct in the hacks.

"The one thing I could not do is give direction," Greenwald told the Times. "That's crossing a line. I was very careful."

Greenwald, who previously published National Security Agency documents leaked by Edward Snowden, suggested that he was concerned he was being charged in retaliation for his reporting last year, according to The Times. Bolsonaro himself has attacked Greenwald for being gay and said he may "do jail time in Brazil" last year.

Greenwald, who lives in Brazil and is married to Brazilian congressman David Miranda, told the Times that the charges were "an obvious attempt to attack a free press in retaliation for the revelations we reported about Minister Moro and the Bolsonaro government."

"There's nothing in the complaint showing that he helped or guided" the hackers, Brazilian law professor Thiago Bottino told the Times. Under the country's laws, he added, "You can't punish a journalist for divulging a document that was obtained through criminal means."

Gleisi Hoffman, the head of opposition Workers' Party, said the charges were an abuse of power.

"They want a police state, with more farces, illegalities and arbitrary acts," she tweeted.

Greenwald told The Daily Beast that the Bolsonaro administration "does not believe in basic press freedoms."

"Less than two months ago, the Federal Police, examining all the same evidence cited by the Public Ministry, stated explicitly that not only have I never committed any crime but that I exercised extreme caution as a journalist never even to get close to any participation," he said. "Even the Federal Police under Minister Moro's command said what is clear to any rational person: I did nothing more than do my job as a journalist — ethically and within the law."

"This denunciation — brought by the same prosecutor who just tried and failed to criminally prosecute the head of the Brazilian Bar Association for criticizing Minister Moro — is an obvious attempt to attack a free press in retaliation for the revelations we reported about Minister Moro and the Bolsonaro government," he added. "We will not be intimidated by these tyrannical attempts to silence journalists."

"This outrageous attack on press freedom is clearly an intimidation tactic from embarrassed prosecutors. It must not be tolerated," said the Freedom of the Press Foundation. "Greenwald and his reporting at The Intercept Brazil have been the subject of frequent verbal attacks from Brazilian President Jair Bolsonaro and even a police investigation — conduct that has already been declared a violation of Brazil's constitution by the country's Supreme Court. Today's charges represent a flagrant disregard for that court order."

The American Civil Liberties Union called on the United States government to condemn the charges.

"The United States must immediately condemn this outrageous assault on the freedom of the press, and recognize that its attacks on press freedoms at home have consequences for American journalists doing their jobs abroad," the ACLU's Ben Wizner said in a statement.

Greenwald told The Daily Beast that the charges aren't just an attack on the free press but on Brazil's justice system.

"It is also an attack on the Brazilian Supreme Court," he said, "which ruled in July that I am entitled to have my press freedom protected in response to other retaliatory attacks from Judge Moro, and even an attack on the findings of the Federal Police, which concluded explicitly after a comprehensive investigation that I committed no crimes and solely acted as a journalist."