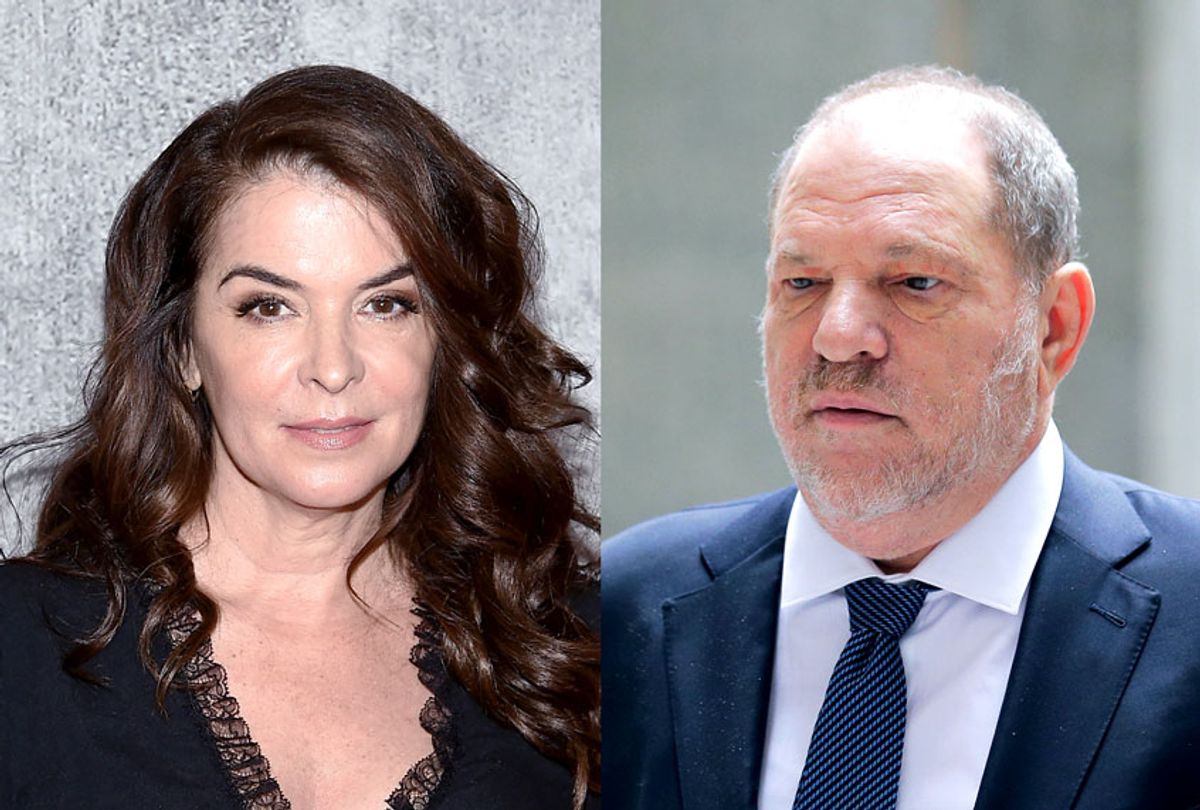 According to a report, the actress had her day in court to

On Thursday, "The Sopranos" and "Hand That Rocks the Cradle" actress Annabella Sciorra told a courtroom about a traumatic incident in which she claims disgraced Hollywood mogul Harvey Weinstein raped her. Her testimony joins one of many in the film producer's sexual abuse trial, which had begun earlier this month.

"He put my hands over my head to hold me back and he got on top of me and he raped me. It was just so disgusting that my body started to shake," Sciorra said, according to a Twitter report Molly Crane-Newman of the New York Daily News. She recalled waking up later after either passing out or blacking out, and then claims that Weinstein performed oral sex on her after saying, "This is for you."

Days later, after she confronted Weinstein about his actions, Sciorra says that his response was, "'That's what all the nice Catholic girls say.' Then he leaned into me and said, 'This remains between you and I.' It was very menacing." She claimed that "his eyes went black" and she thought he was going to hit her.

That incident, which reportedly happened in either late 1993 or early 1994, was not the only encounter that Sciorra says she had with Weinstein. According to Crane-Newman, "Sciorra described an incident in 1997 when Weinstein turned up outside her hotel room wearing nothing but his underwear 'with a bottle of baby oil in one hand and a videotape in the other.' She said this time, she was able to convince him to leave."

Although Sciorra did not report the incident to the police at the time, she described how the incident traumatized her and changed her personality. She claims that Weinstein stopped her from booking roles for years and Sciorra's friend Rosie Perez told The New Yorker that Sciorra "started acting weird and getting reclusive."

Because Sciorra's complaint is considered to have passed the statute of limitations to be prosecuted as a rape under New York law, her accusation will be used to support a charge of predatory sexual assault, according to The New York Times. That charge requires a jury convicting Weinstein of committing a serious sexual offense against at least two people. Sciorra is one of six accusers who are prepared to testify that Weinstein attacked them. Three of those women are expected to testify to incidents similar to the one described by Sciorra. Two others are accusing him of rape and criminal sexual act, including a production assistant who says that he forced oral sex on her in 2006 and an aspiring actress from Washington State who says that he raped her in 2013.

The production assistant, Mimi Haleyi, alleges that Weinstein "wouldn't take no for an answer and took me into a bedroom . . . that looked like a kid's bedroom with drawings on the wall."

She added, "He was extremely persistent and physically overpowering. He then orally forced himself on me, while I was on my period. He even pulled my tampon out. I was mortified. I was in disbelief and disgusted. I would not have wanted anyone to do that to me, even if that person had been a romantic partner."

Collectively, these testimonies will attempt to establish a pattern to Weinstein's behavior.