Climate experts agree: "Steve Mnuchin should go back to college" — not Greta Thunberg

"After she goes and studies economics in college, she can come back," Mnuchin said in a dismissal of Thunberg 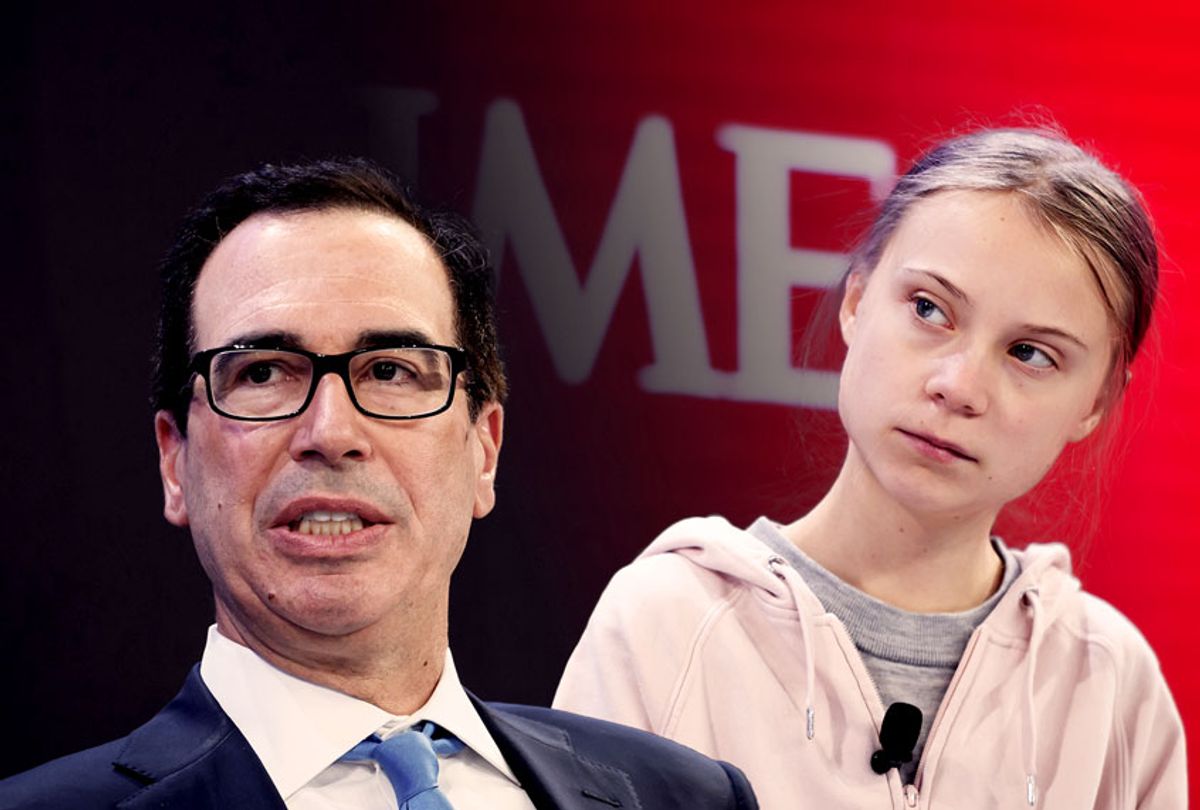 Treasury Secretary Steven Mnuchin was criticized by scientists after he claimed that teenage climate activist Greta Thunberg should not criticize American fossil fuel investments until she studies economics in college.

"Is she the chief economist? Or who is she? I'm confused," Mnuchin told reporters at the World Economic Forum in the Swiss city of Davos on Thursday.

After claiming his remarks were "a joke" that was allegedly "funny," Mnuchin added: "After she goes and studies economics in college, she can come back and explain that to us."

Mnuchin was referring to the demand made not only by Thunberg but also by 20 other young climate activists that global leaders "completely divest" from fossil fuels, a policy which would include ending the "madness" of continuing to invest in fossil fuel exploration and extraction.

"Steve Mnuchin suggested that Greta Thunberg should go to college and study economics before offering policy advice. Perhaps Steve Mnuchin should go back to college and study environmental science before he enacts additional environment-destroying policies," Ken Caldeira, an atmospheric scientist at the Carnegie Institution for Science's Department of Global Ecology, told Salon by email.

After describing how President Donald Trump gutted the Treasury Department's Office of Energy and Environment, Caldeira pointed out that "every thoughtful economist knows that there are environmental costs of economic activities that are not reflected in the prices of the goods and services we consume. Thoughtful economists focus on how these costs can be reflected in market incentives."

By contrast, Caldeira argued that Mnuchin "has demonstrated only contempt for environmental concerns and is apparently interested mostly in lining the pockets of wealthy Donald Trump supporters, including Steve Mnuchin."

Mnuchin needs to "develop an understanding of the environmental threats posed by his economic policies," while "Greta Thunberg's remarks on climate science have been accurate," Calderia concluded.

"I have been enormously impressed by Greta Thunberg as to how well-informed and widely read she is," Trenberth told Salon. "Unfortunately, that is not the case for President Trump, or apparently, Steven Mnuchin. This issue is not so much about economics as about values — and what kind of a planet we leave the next generation. In fact, it is not so much what you do: The needs are clear as to how you go about it and implement the changes that the politicians ought to be concerned about."

Thunberg herself replied to Mnuchin's comments on Twitter, writing that "my gap year ends in August, but it doesn't take a college degree in economics to realise that our remaining 1,5° carbon budget and ongoing fossil fuel subsidies and investments don't add up. So either you tell us how to achieve this mitigation or explain to future generations and those already affected by the climate emergency why we should abandon our climate commitments."

Rep. Alexandria Ocasio-Cortez, D-N.Y., also tweeted her support for Thunberg, observing that "if you don't have an economics degree like Greta, they'll mock you for not having one. If you DO have one, as I do, they'll claim it's illegitimate."

She added, "Haters gonna hate & deniers will deny. They will deny logic, science, and environmental consensus in order to protect oligarchy."

Trump also took a swipe at climate change activists, telling reporters Thursday at Davos that "to embrace the possibilities of tomorrow, we must reject the perennial prophets of doom and their predictions of the apocalypse. They are the errors of yesterday's fortune tellers, and we have them and I have them. And they want to see us do badly, but we don't let that happen."