White House YouTube page streamed a sermon that claimed homosexuality was caused by demons. Mike Pence was there 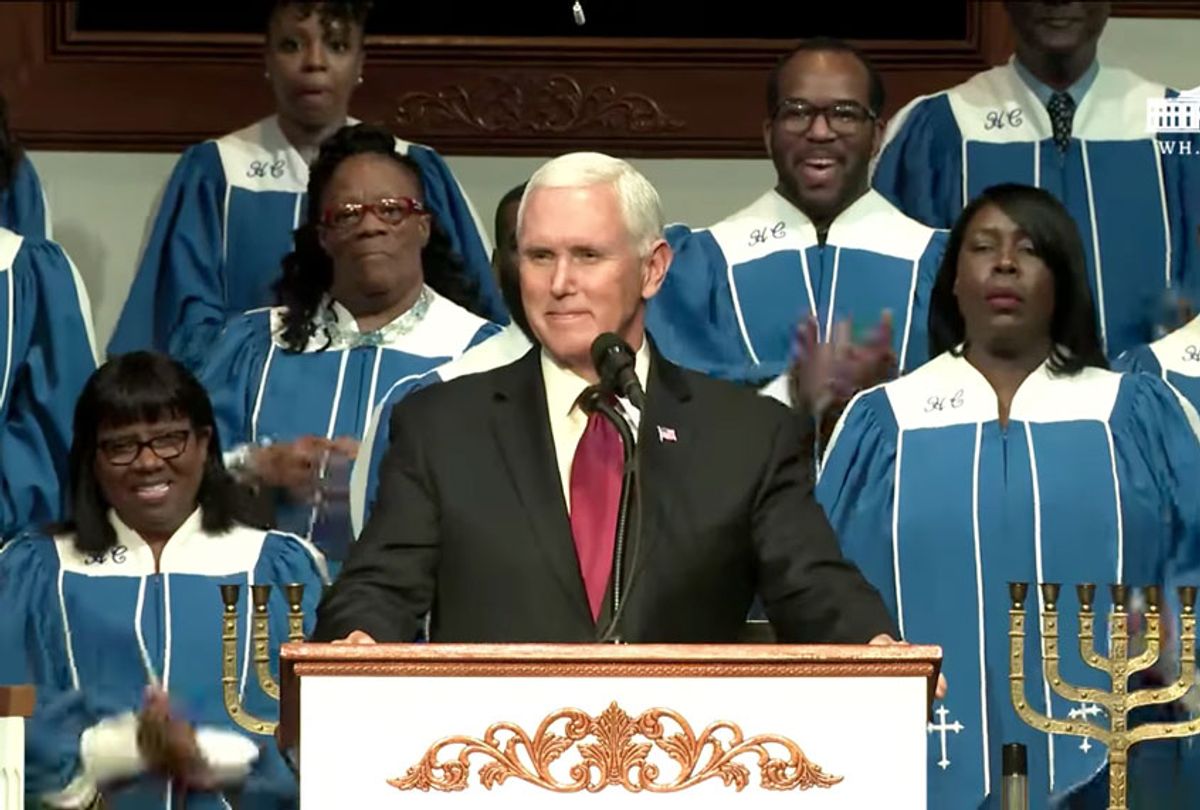 The White House streamed a homophobic church service attended by Vice President Mike Pence on Sunday, during which a preacher claimed that a "demonic spirit" is behind homosexuality.

The video, which is still available on the official White House YouTube page, showed Pence promising to "stand strong for the values that you hold dear" while speaking at the Holy City Church of God in Christ in Memphis.

Taylor claimed that gay people were "trying to destroy" the principle of marriage and "cut off the reproduction process."

Taylor went on to call homosexuality "unnatural," citing a debunked myth that same-sex attraction does not exist among other species. "You never see two male animals coming together," he said. "We've got to expose what the devil is doing."

Taylor also attacked transgender people during his sermon. "He made a man to be a man," Taylor said. "If you want to know what God made you, when you go to the bathroom, just check your plumbing."

Taylor's comments came after Bishop Vincent Matthews Jr. lamented that Pence was "one of the most persecuted Christians in America."

After the sermon, Pence praised the church for uniting people and invoked Martin Luther King Jr. "In these divided times," the vice president tweeted, "let us remember Rev Dr Martin Luther King Jr as he challenged the conscience of a nation and touched the hearts of millions of Americans."

LGBTQ advocates slammed Pence's appearance at the sermon and the White House broadcasting it on an official YouTube page.

Human Rights Campaign spokesperson Charlotte Clymer told NBC News that the event was an example of Pence using his "perception of faith as a cudgel against vulnerable communities."

"Christ clearly taught us to love one another," Clymer said.

"Wish we could say we were surprised that the Vice President spoke at a church event where the bishop spouted vile things about LGBTQ people," the LGBTQ advocacy group GLAAD said on Twitter. "But here we are."

GLAAD listed the event as the Trump administration's 136th attack on the LGBTQ community.

Pence has been widely criticized for his anti-LGBTQ views and previously advocated for the discredited practice of "conversion therapy" when he was an Indiana lawmaker.

Pence's wife Karen made headlines last year when she became a teacher at a Christian school that bans gay and transgender students and employees.

According to a report from The New Yorker's Jane Mayer, President Donald Trump has mocked Pence's views in private and once joked during a meeting that Pence wants to "hang all" gay people.