"Shrill" embraces its inner bitch in Season 2, and we love it 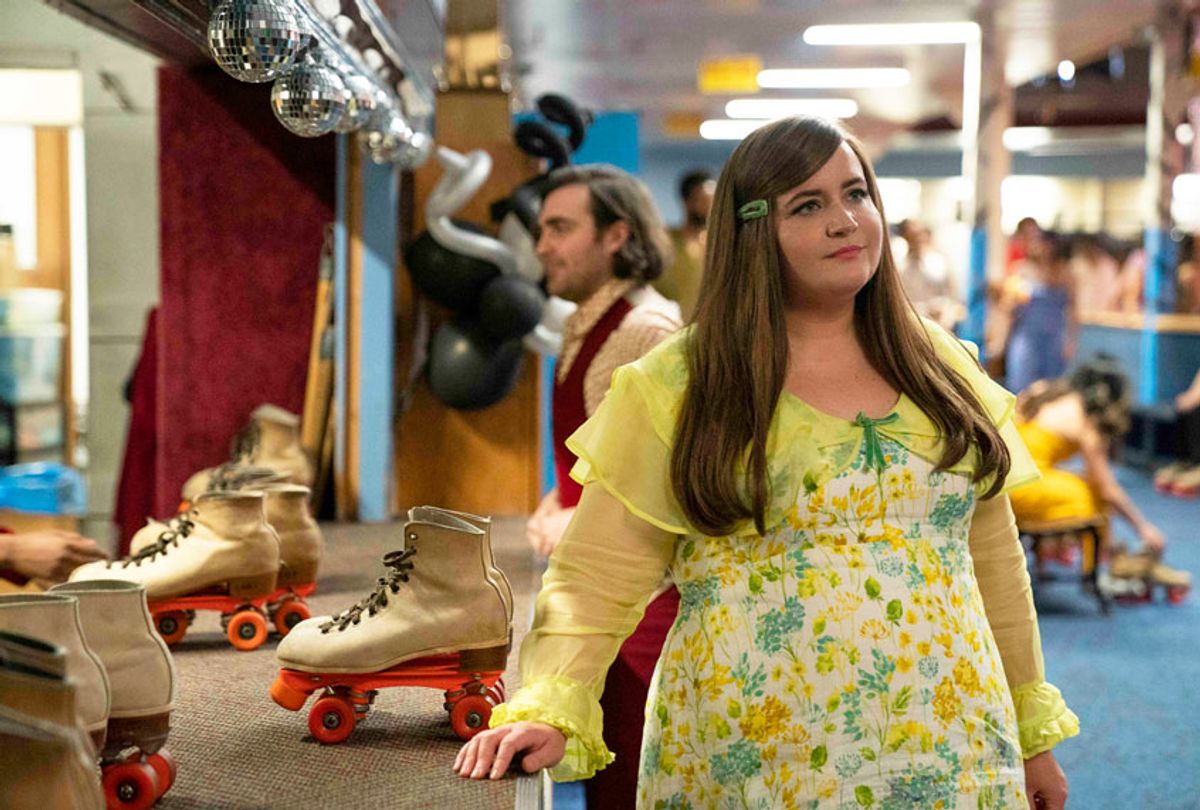 After a month of being her own boss, Annie is starting to crack. She cannot find work and she misses her old friends from The Thorn. Ryan comes with her to Ruthie's roller-skating birthday party to reconnect with her old friends and face Gabe. Annie (Aidy Bryant), shown. (Allyson Riggs/Hulu)
--

"I'm a f**king bitch and I love it," Annie (Aidy Bryant) screams, her hair wind-swept and a blood stain on her dress. The second season of "Shrill" begins just moments after the last season ended; Annie had just confronted her internet troll (Beck Bennett) at his home, which culminated with her smashing a flower pot through his car window. "You better run, you fat bitch," he screamed — an echo of the hundreds of threats he would leave anonymously online  —before she took down an alleyway, and busted in on her new boyfriend Ryan's (Luka Jones) video game session.

This is a tremendous high, especially considering how the first season – based on the book of the same name by Lindy West – began (Ryan asking Annie to leave out the back gate after they'd had sex, ostensibly so his roommates wouldn't see, and her quietly agreeing). Over the first six episodes of the show, we watched Annie grow in her self-assuredness and, by virtue of that, her willingness to ask for what she deserves — from her boss, from her boyfriend, even from her mother who never seemed to come to terms with their respective body sizes.

There has been some carnage along the way; in her effort to find herself, Annie lapsed into some selfishness. This season finds her having to come to terms with that. She quit her job as a writer at "The Thorn"; she and her tell-it-straight roommate Fran (Lolly Adefope) are coming back from being on the outs; her parents bristle at her new life choices, including her unmanicured, unemployed boyfriend.

These highs and lows are what make "Shrill," this idea that there are bumps along the road to fully becoming or feeling like oneself. Some of these are self-imposed, and some of them are societal. Arguably the strongest episode of the season, which is directed by Natasha Lyonne, is when Annie is assigned to cover the WAHAM (Women Are Having A Moment!) conference, which uses self-empowerment speak to pretty up the nasty, predatory underbelly of the self-care industry. One of the products being sold is an expensive masking makeup to "cover the gross skin on your legs."

Inherent to this scene is the idea that while Annie's love for herself may be growing, there will always be people out there who seek to profit from making her feel unlovable. This could have led to an ample amount of scripted introspection — and there is some — but what propels this season of "Shrill" into new territory is in the natural way the show's worldview is broadened. We're introduced to one-off characters who subtly (or not) embody a message of self-acceptance, like one of Annie's interview subjects, a budget analyst who is part of a nude cycling club.

This season of "Shrill" also dips back into gorgeously textured party scenes; nothing will beat the message of last season's "Fat Babe Pool Party," but this season's ketamine and White Russian-filled Studio 54 roller-rink party and a queer burlesque night are worthy successors.

Season 2 also pays off, in some sense, on Ryan as a character. After taking the full first season to recognize Annie for the catch she is (I spent much of last season talk-shouting at Annie through the television about how she could do better), he has morphed into a doting, dummy of a partner.

He's not particularly smart, but he's loyal. "I'll be gross with you Annie, always," Ryan tells her as he holds her hair extensions while she vomits into a bathtub; he's also incredibly hot for Annie. While this shouldn't be radical in 2020 — but it still is — it's a joy to see Annie's sex life portrayed with such positivity and enthusiasm, with no mention of her size.

In other words, this season of "Shrill," much like the last, manages to find itself in a very sweet spot between true-to-life and heartwarming. It's sugared, but not saccharine, and as Annie says drunkenly at the roller rink, it's ready to have "a real honesty talk with you," the viewer.

All eight episodes of "Shrill" Season 2 are currently available to stream on Hulu.