If a great artist is someone who captures the (deranged) spirit of his time, then the MAGA painter is the real deal 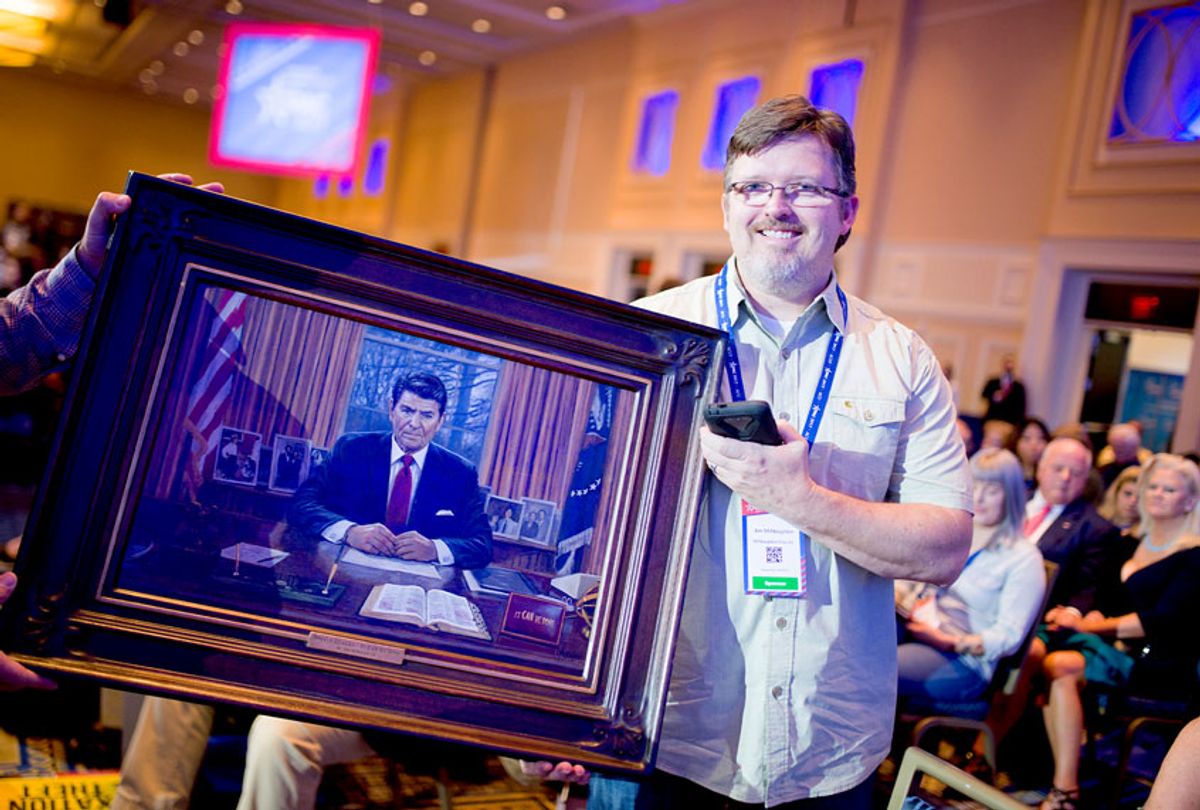 Painter Jon McNaughton shows off a portrait of President Reagan at a taping of Sean Hannity's Fox News TV show during the Conservative Political Action Conference at the Gaylord National Resort and Convention Center February 23, 2017 in National Harbor, Maryland. Hosted by the American Conservative Union, CPAC is an annual gathering of right wing politicians, commentators and their supporters. (Zach D Roberts/NurPhoto via Getty Images)
-- 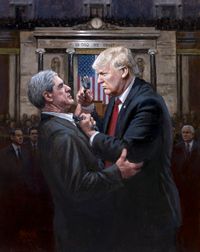 That painting is meant to depict Trump as indomitable and resolute and Mueller as dodgy and devious, but as usual with McNaughton the effect is more mysterious than that. His technique occupies an uneasy middle ground between realism and impressionism; the background, which appears to be the U.S. Senate chamber, is indistinct and deeply shadowed, like an uncertain representation of the afterlife in religious art. (I won't state this with confidence, but I think the figure to Trump's right, originally recognizable as Jeff Sessions, has subsequently been rendered more generic.)

As internet searches constantly remind you, Jon McNaughton has nearly the same name as the indie filmmaker John McNaughton, best known for directing the influential zero-budget 1986 feature "Henry: Portrait of a Serial Killer," whom I have met. One could struggle to make that coincidence seem significant, but perhaps it speaks for itself. The painter Jon McNaughton lives in Provo, Utah, and studied art at Brigham Young University. He is a devout Latter-day Saint ("Mormons" have been canceled) and in fact the bulk of his pre-Trump work was large-canvas paintings on religious themes, which could fairly be called visionary, if not delusional.

His work does not belong, however, to the extensive tradition of outsider art by devout believers. Moments of naivete or sloppiness aside, McNaughton is an accomplished craftsman, and he is distinctly aware of art history, drawing heavily on the historical-representational painting of the Romantic era. One of his most beloved works is "Crossing the Swamp" (2018), an homage to Emanuel Leutze's "Washington Crossing the Delaware" that's a bit too on-the-nose to avoid unintentional comedy. (It also depicts numerous supporting characters who would probably just as soon be scrubbed off the canvas: Sessions, John Bolton, John Kelly, Nikki Haley, Jim Mattis.)

McNaughton's 2019 painting "The Resistance," on the other hand, is a bewildering, ambiguous and skillfully rendered tribute to Goya's "The Third of May 1808," a work I would speculate that relatively few Trump fans recognize. Art historian Jennifer Greenhill offers a deconstruction of this painting in her fascinating essay for the Atlantic a few months back, one of very few attempts to treat McNaughton's work seriously:

In The Resistance, you're not supposed to ponder how today's progressives align with the Napoleonic forces invading Madrid in 1808, or to worry about the context of the Spanish government's 1814 commission of the painting after Napoleon's fall. Don't scratch your head over where McNaughton's brown-skinned MAGA martyr fits in Trump's anti-immigrant worldview, and definitely don't go down the rabbit hole of Spanish colonialism's legacies in the Americas. The name Goya shouldn't necessarily ring a bell either. Instead, allow McNaughton's painting to register as "historically significant" — something you think you've seen before and know is great — without the baggage of historical particulars. Enjoy how easily MAGA iconography is slipped into the "historically significant" framework. It's a little bit irreverent, but isn't it also ennobling? When plunked down in the context of an old master painting, the MAGA ball cap becomes something like the bonnet rouge or liberty cap — the sartorial signifier of revolt for our age.

Looking back at McNaughton's oeuvre, which gradually drifted from religious themes into demented or apocalyptic right-wing politics, he almost seems to have anticipated Trump, if not actually conjured him into existence. Although the salvific greatness of the 45th president is for McNaughton what the nativity of Christ was for artists of the late medieval period — the all-in-all, the subject that contains and subsumes all others — his most important single painting predates even the dream or possibility of Trump, longing for him without quite daring to imagine him.

That would be "The Forgotten Man" from 2010, in which a forbidding Barack Obama tramples the Constitution underfoot, ignoring the imploring pleas of the founding fathers behind him, not to mention the downcast white man in an ill-fitting hoodie, alone on a nearby park bench. (Bill Clinton, Lyndon Johnson and — I think? — Teddy Roosevelt applaud Obama's treachery.) McNaughton has denied any explicit racial text in this painting, and that's just one of those times where you say: The work speaks for itself, my dude. Your so-called intentions are unimportant.

Sean Hannity of Fox News was instrumental in foregrounding "The Forgotten Man," first as an anti-Obama broadside and then as a visual inspiration for the Trump campaign. Hannity now reportedly owns the original and is the subject of a particularly bad recent McNaughton painting, "Modern-Day Paul Revere," which embodies what I would describe as the artist's late-Trump-era slide into lazy, self-referential decadence.

Honestly though, I have no investment in insulting Jon McNaughton. That's way too easy. His work may well be a bastardized, nonsensical blend of styles and themes, at best half-aware of the resonances it conjures up and the uncontrollable meanings it unleashes. But one could say that about a great many things, including most of what is generically considered "postmodern" art, which often professes to know what it's about without actually having the slightest idea. That's also got nothing to do with how we tell good art from bad, which you may have noticed is a question on which humans often disagree.

If I'm attacking anything, it's the niche-marketed banality, stupidity and small-mindedness of our age, which has conjured up and nourished someone like McNaughton as its accidental but inevitable antithesis. (In discussing "The Resistance," he has specifically compared himself to Goya, who rebelled against the academic painting style and political pieties of his day.) He possesses undeniable talent and deeply unorthodox vision, as well as honest-to-Christ fine art training, but is more or less a human vacuum-cleaner bag stuffed full of cultural and political carpet lint from the last several decades (if not centuries).

Of course liberal or leftist observers from outside the Trump bubble, armed with elite education and enlightened attitudes to match, deride his work as ridiculous or offensive. What does that accomplish? Even if we conclude those terms are accurate, they are hardly adequate in capturing the peculiar power and appeal of McNaughton's paintings. Do they add anything to the collective understanding, beyond pissing on trees to mark the territory of an imagined or threatened superiority? Because that's not an addition at all.

As McNaughton himself is keenly aware, the political leader he has embraced as his most important subject was also mocked and underestimated, and we know how that turned out. In a statement on his website that I read as entirely sincere, McNaughton expresses his gratitude to the "thousands of angry liberals who have expressed their opinions regarding my patriotic paintings," as they have helped him understand "how the liberal mind thinks."

When we as Americans stop worrying about what the politically correct establishment insists is acceptable, we will begin to restore the heart and soul of America.

Needless to say, McNaughton's conception of "how the liberal mind thinks" is foggy and misguided at best. And I definitely don't want to know much about his notion of "the heart and soul of America." But the same malady afflicts us all, to a greater or lesser degree. What makes McNaughton's work "important," in scare quotes, is the remarkable extent to which he has literalized the heavily symbolic post-truth fantasy world of American "conservatives" (so-called, since that term has nearly inverted in meaning) and rendered it on canvas to deeply troubling and ambiguous effect. I guess McNaughton doesn't mean these paintings to be troubling or ambiguous, or at least not in the way they are. But this is kind of what happens in art. John Milton didn't intend to invent the romantic antihero with the character of Satan in "Paradise Lost," but it's really tough sledding to read the damn thing any other way now.

His representations of Donald Trump as a blond, latter-day Elvis figure — at least 60 pounds lighter and 30 years younger than the lumbering, obese 73-year-old man who occupies the Oval Office — are not, I believe, meant to fool anybody. My personal favorite in this vein is "MAGA Ride," in which Donald and Melania Trump power down a Washington street on a Harley painted in American-flag colors, cheered on by an implausibly multiracial crowd of red-capped onlookers. Here McNaughton somehow splits the difference between dumbass ignorance and desperate self-consciousness, throwing in a pair of Norman Rockwell-style boys (one white, one black) running behind the Harley and even painting himself into the far edge of the canvas.

Let's not insult Trump's fans or their favorite artist by assuming that anyone takes this as a realistic depiction of anything. "MAGA Ride" or "Crossing the Swamp" or "You Are Not Forgotten" — the triumphant Trump-era sequel to "The Forgotten Man" — are allegorical or visionary works, of a piece with McNaughton's earlier paintings of Biblical episodes or pseudo-events from Mormon pseudo-history.

They are visions of the world as it ought to be, according to people who have been stripped of all wishes and hopes about the actual future and left only with debased, confused copies of dreams left over from other times and other places. There is a ghoulish, addictive quality to these paintings that captures the spirit of this period of American history perfectly — even if, by comparison, the art of the actual Nazi period looks vigorous, imaginative and alive. What makes Jon McNaughton a terrible painter is exactly what makes him a great painter. I don't think you can sum up our nation's contradictions any better than that.