No fumbling here! These handheld desserts are foolproof, even if your decorating skills qualify you for "Nailed It" 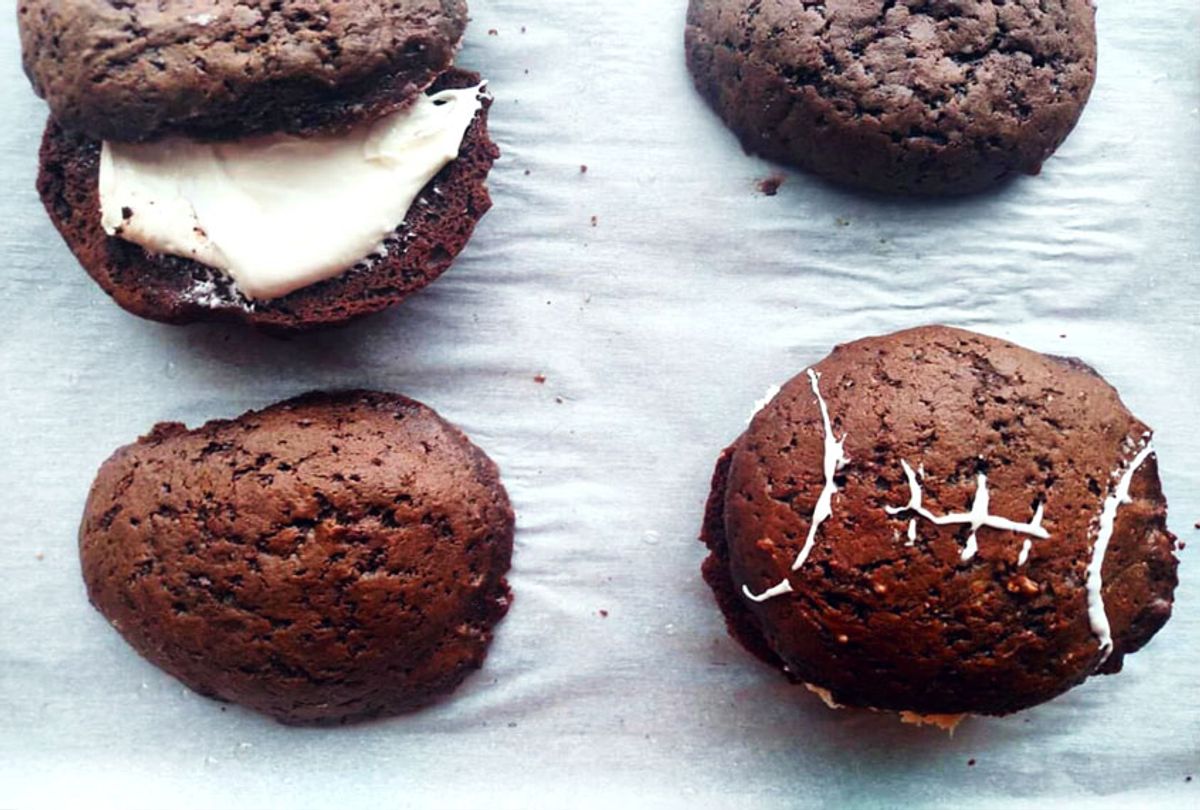 I've recently become obsessed with the dark social media hole that is "cake decorating fail" Facebook groups. I spend far too much time flipping through albums of bargain "Frozen" cakes that look like the characters' faces melted in transit and special occasion pastries boldly iced with misspelled words like "Congradalations" and "Anivursary."

I do this with the full acknowledgement that I couldn't do any better. Fondant both disgusts and mystifies me (I'm not the only one, per this recent "Food and Wine" article), and my piping skills are imprecise at best.

So when dessert duty falls to me, I tend to choose something that requires no additional decoration or has a foolproof design plan — like these whoopie pies that are decorated like little footballs. Whoopie pies are basically fat, chocolate cookie sandwiches with a marshmallow creme stuffing. For these, I use that same filling as a simple icing, too. They are easy to make ahead and are handheld, making them perfect for Super Bowl entertaining.

1. Preheat your oven to 350 degrees. In a large bowl, combine the flour, cocoa, baking soda and salt. In a separate bowl, briskly whisk the buttermilk and vanilla.

2. In a standing mixer, cream the butter and brown sugar until fully combined and just a little fluffy. Then add the egg and continue mixing. Reduce speed and add the buttermilk and vanilla mixture, as well as the vegetable oil, followed by the the dry ingredients. The resulting mixture should be dark brown and have a little more body than a brownie batter.

3. Using an ice cream scoop or large spoon, place ¼ cup mounds of batter 2 inches apart on two large baking sheets that are greased and covered in parchment paper. Bake in the upper and lower thirds of the oven, switching positions of the sheets halfway through baking, until tops are slightly puffed and springy to the touch.

4. Transfer the cookies, flat-side down, onto a wire cooling rack. Leave until completely cool.

5. While the cookies are cooling, work on the marshmallow creme. In a small saucepan, heat water, sugar, and corn syrup over medium heat. Whisk occasionally.

6. Meanwhile, beat the cream of tartar and the egg whites in a stand mixer with the whisk attachment. Beat on medium speed until soft peaks form — it should take about 3 minutes.

7. Once the sugar is completely dissolved and the sauce pan mixture is gently bubbling, remove from heat. Reduce the speed on the mixer to low and slowly add to the egg white mixture. Bring that speed back up to medium, allowing the mixture to whip for about 7 minutes.

8. Once fluffy peaks begin to form, add the vanilla, and continue mixing for two more minutes. Boom — marshmallow creme. There should be about two cups. Remove the creme from the mixer, and quickly wipe it down.

9. Add butter, confectioners sugar and vanilla to the mixer until creamed and slightly fluffy. Reincorporate the marshmallow creme at this point, mixing on low for an additional minute. Place 1 ½ cups of the filling in a large bowl, and reserve ½ cup for the icing.

11. Place the remaining ½ cup of marshmallow mixture in a fine-tipped pastry bag (you can improvise with a plastic sandwich bag with a clipped corner). Time to decorate. I keep things simple — I do a thin crescent shape on either side of football, then a short line down the center with three or four even shorter lines bisecting it to mimic stitching.