Sean Hannity lashes out at Mitt Romney over impeachment witnesses: "I don't recognize this guy"

The Fox News host has a long history of coziness with Trump, while Romney has long been critical of the president 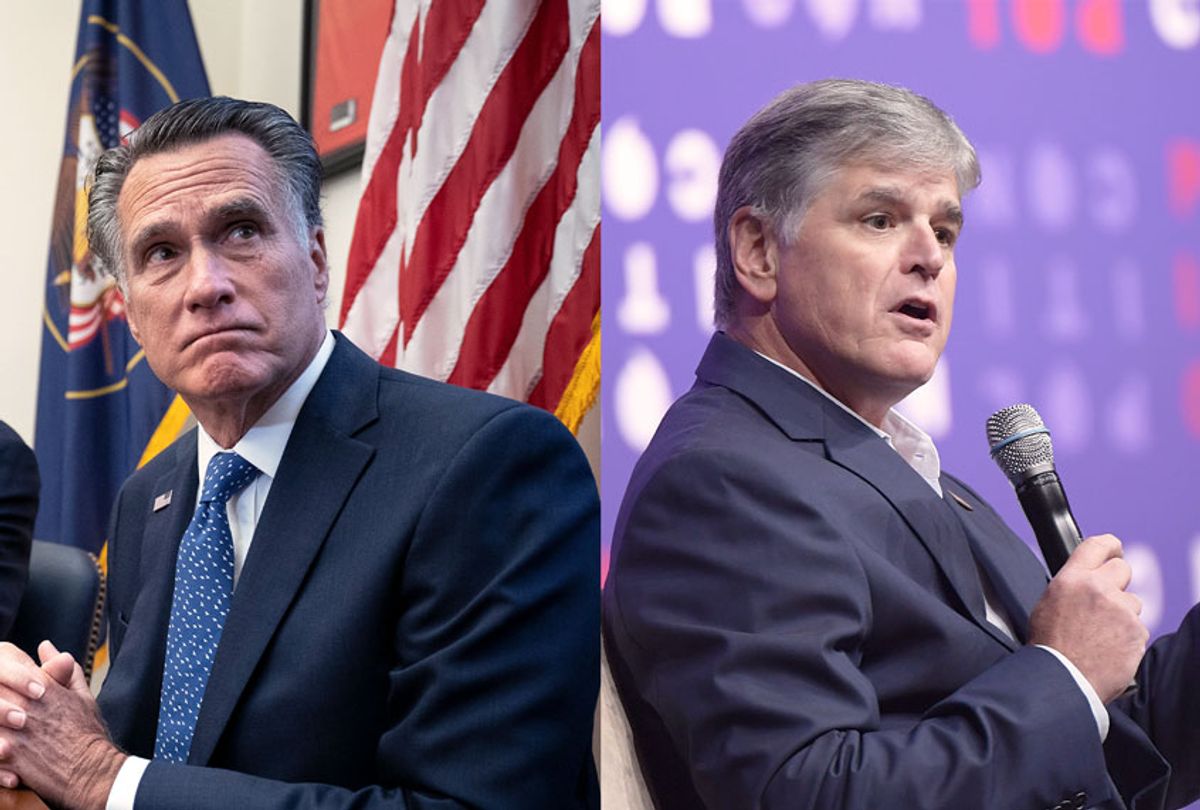 Fox News host Sean Hannity considers Sen. Mitt Romney, R-Utah, to be not only a "huge disappointment" but also unrecognizable because of his openness to calling witnesses in President Donald Trump's impeachment trial.

"I liked Mitt Romney. Mitt Romney, I think, would've been a great president. In 2012, he was the better person to be president," Hannity said during Tuesday night's broadcast. "I thought I was friends with Mitt Romney. I don't recognize this guy anymore — another one. He has been a huge disappointment. I thought he would have been a better president than Obama. We all went all in, wanted him to win. Like his family, wife, kids — wonderful people."

The Fox News host concluded, "But this sanctimonious Trump hatred is getting old, especially as you watch the president accomplishing everything you said, Mitt Romney, you wanted to have happen in the country."

Hannity, who is a close friend of Trump, is also an informal adviser to his administration. In 2012, the Fox News host claimed that he had urged Trump not to run for president as an independent. In 2018, it was reported that Hannity was a client of former Trump personal attorney Michael Cohen, which the Fox News host has denied. In November, former Ambassador to Ukraine Marie Yovanovitch testified that Secretary of State Mike Pompeo had called Hannity to urge him to stop spreading falsehoods about her. (Hannity denied ever talking to Pompeo.)

"What I was told by Phil Reeker was that the secretary [Pompeo] or perhaps somebody around him was going to place a call to Mr. Hannity on Fox News to say, 'You know, what is going on? I mean, do you have proof of these kinds of allegations or not? And if you have proof, you know, telI me, and if not, stop,'" Yovanovitch told Congress in November.

She added, "And I understand that that call was made. I don't know whether it was the secretary or somebody else in his inner circle. And for a time, you know, things kind of simmered down."

According to a recent BuzzFeed News report on interview summaries with key witnesses who testified in former special counsel Robert Mueller's probe of allegations of collusion between the Trump campaign and Russia, Hannity served as a "back channel" to Trump for indicted former campaign chairman Paul Manafort. The Fox News host also reportedly interacted with the Trump campaign in 2016 to help coordinate strategy, such as floating the idea of having Trump meet with Russian President Vladimir Putin.

By contrast, Trump and Romney have long had a tempestuous relationship. In 2015, Romney criticized Trump's nascent presidential campaign after the then-reality TV star made racist remarks about Mexicans and insulted the war record of Sen. John McCain, R-Ariz. He called Trump's refusal to disavow the KKK "disqualifying" and delivered a speech at the University of Utah in 2016 describing the future president as a "phony" and a "fraud."

After Trump was elected, Romney condemned the president's response to the racist protests in Charlottesville, Va. It has now been reported that Romney has urged his colleagues to call for witnesses in the impeachment trial, arguing that senators should hear from individuals with direct knowledge about the accusation that Trump abused the power of his office.