I have photos of two World War 2-era Japanese American men on my desk. They both fought for America's ideals 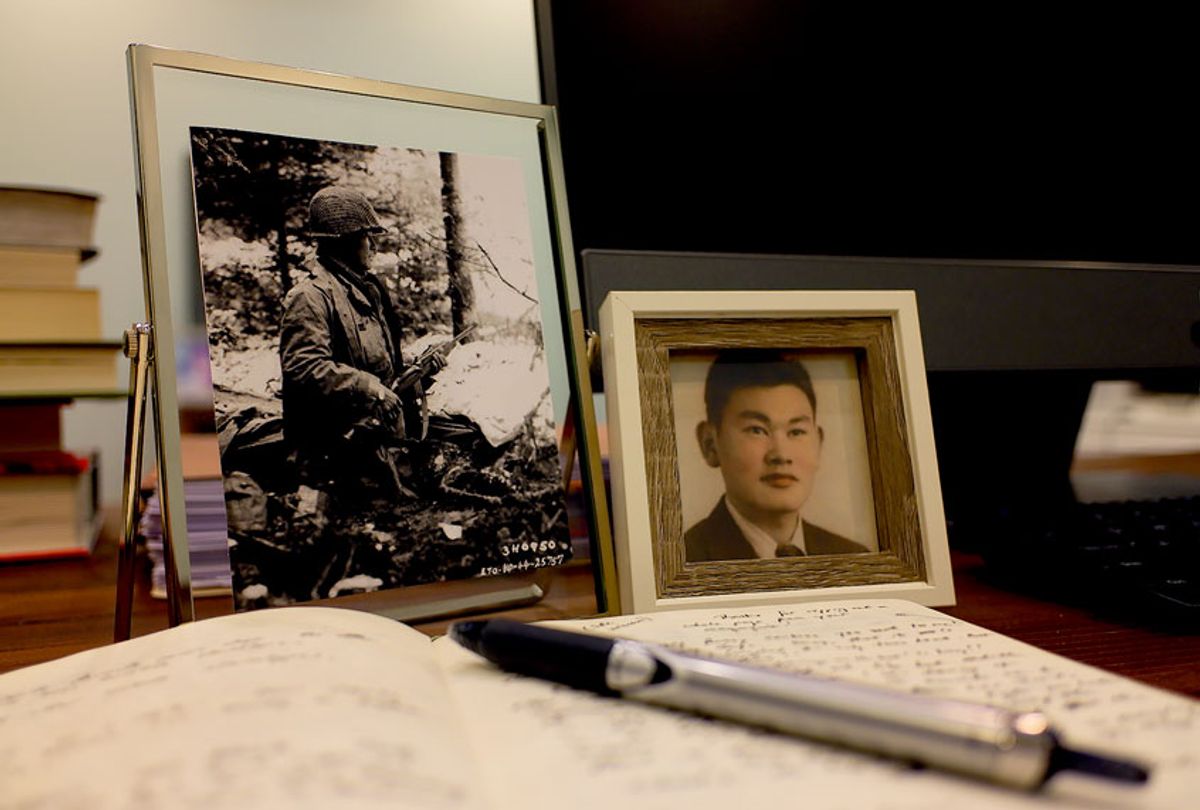 Framed photos of Fred Korematsu, on the desk of Andrew Fukuda (Courtesy of publicist)
--

Often when I work on a novel, a single image will capture the overall theme of the book, and guide me along like a compass. I've found it helpful to have that image close by as I write; as every author knows, it's easy to lose your way. In the case of "This Light Between Us," I kept two such photos on my desk.

The first photo is of Goichi Suehiro from Kaneohe, Hawaii. In this photo, Suehiro is standing waist-deep in a mud-filled slit trench, clutching a rifle. It's November 1944, and he's somewhere in the St. Dies region of France. His American combat uniform — a few sizes too large — is draped over his shoulders, and seems scant in this cold and bleak setting of mud, snow, and mortared ground. He's staring straight ahead, scanning for German movements 200 yards away.

From what we know, Suehiro was a capable soldier. He was in the 442nd Regimental Combat Team, and there are two things you should know about the 442nd. First, it was a segregated unit composed solely of Japanese American soldiers. Many were recruited straight out of U.S. internment camps. Second, the 442nd went on to become the most decorated military unit for its size in American history including 9,500 Purple Hearts, 5,200 Bronze Star Medals, 588 Silver Stars, 52 Distinguished Service Crosses, seven Presidential Unit Citations, and one Congressional Medal of Honor. It's as if they had something to prove.

Suehiro was classic 442nd material. He was tough as nails, earning numerous awards, including the Purple Heart with oakleaf cluster. Said one of his fellow soldiers: "I'll go to hell and back with that man." When you look at the photo, you see that. A toughness to him, a steely poise, grit. And something else that's less visibly obvious but surely no less true: his patriotism. It was love of country that brought him to this godforsaken battlefield in St. Dies.

The second photo on my desk also features a Japanese American man. His name was Fred Korematsu, and in this formal portrait shot, he's attired in a suit, his hair immaculately coiffed. It's a comfortable studio setting, far from the bloodied battlefields of Europe. The two photos — and two Nisei men — couldn't be more different.

But they had more in common than might first appear. They both fought for America, albeit in different ways. While Suehiro fought Nazis in Europe, Korematsu waged a different kind of battle in America.

Fred Korematsu's battle began on May 3, 1942 when General John L. DeWitt issued Civilian Exclusion Order No. 34. That order mandated the removal of "all persons of Japanese ancestry" to be incarcerated in internment camps. This included Americans who, like Fred Korematsu, were second-generation birth citizens and had never even been to Japan. The order stunned them all. But there was no time to wallow. Only five days later the Korematsu family boarded a bus and were taken to Tanforan Racetrack. There, along with thousands of other Japanese Americans, they were detained and forced to sleep in horse stalls.

Fred Korematsu didn't go with them. He chose to stay behind in Oakland, in the restricted zone. There were two reasons why he violated the order. One was personal: he didn't want to leave his Italian American fiancé, Ida Boitano. He wanted to share a life with her — as he'd later say during an FBI interview — "as normal people." The second reason was more on principle: he felt the order was deeply wrong. "It burned me up," he would recall. "I felt angry and hurt and confused . . . I could not understand how the United States government could do this to American citizens." And so he defied the order. He stayed behind.

His freedom, alas, was short-lived. On Memorial Day, while strolling with Ida down Estudillo Avenue in San Leandro, a policeman stopped him. Fred was arrested and booked.

For weeks he was shuttled from jailhouse to jailhouse. Then one day while in the Presidio Stockade, quite out of the blue, a stranger came to see him. His name was Ernest Besig, and he was an attorney with the American Civil Liberties Union. The ACLU, explained Besig to a surprised Fred, was looking for a test case to challenge the evacuation orders. There would be a long road ahead with little guarantee of success, and Fred would likely be lambasted by the media. But was Fred interested? Fred was, and agreed on the spot.

It was a decision that cost him dearly. By the time the military police took him to Tanforan in June, he'd already been smeared in the newspapers, even on the East Coast by the New York Times. And at Tanforan, instead of being embraced by the Japanese American community as a fighter for their cause, he was misunderstood and harshly criticized. Many considered him a criminal and traitor to America. At gatherings, people turned their backs and shunned him. Even his own family denounced him. His father called him an idiot. His brothers railed at him for his defiance. His mother was ashamed to show her face outside their barracks.

"The other internees knew about me and they kept away from me," Fred said of the internment years. "They figured I was a troublemaker." He lived in isolation with few friends. He worked the graveyard shift to avoid contact with others. How alone he must have felt: rejected and imprisoned by his country, ostracized by his own community, rebuked by family, and eventually even discarded by Ida, his fiancé. Walking alone at night under the desert stars, he must have felt like the loneliest man in the world.

But he never gave up. As his case wound its way up to the Supreme Court, I think he still believed in America, that in the end her legal system would come through for him.

On December 18, 1944, the Supreme Court issued its ruling. It held that the exclusion order did not violate the Constitution. The decision wasn't unanimous. In a scathing dissent, Justice Frank Murphy wrote that the exclusion order "falls into the ugly abyss of racism. . . [It] is one of the most sweeping and complete deprivations of constitutional rights in the history of this nation. . . I dissent, therefore, from this legalization of racism."

But it didn't matter what Justice Murphy or the two other dissenting Justices believed. The 6-3 majority won. Racism was legalized. It "seemed like the bottom fell out," Fred would later recall. "When I found out that I lost my decision, I thought I lost my country."

In the years that followed, Fred didn't talk much about the case. He told none of his friends. Even his own daughter didn't realize her father's involvement until she was a high school junior and studying the Korematsu case in class.

Only decades later did Fred find redemption. His criminal conviction was overturned in 1983. Fifteen years later, President Bill Clinton awarded him the Presidential Medal of Freedom, the highest civilian award. In 2018, the Supreme Court overturned the Korematsu decision in Trump v. Hawaii. It had taken the Court 73 years to finally (though many argue, incompletely) reverse this "legalization of racism."

And now Fred has his own day. Every January 30, Fred Korematsu Day is celebrated in California, Hawaii, Florida and Virginia. I hope many more states follow suit. It's a day to honor this soft-spoken man who, in the visiting room of the Presidio Stockade so many decades ago, said yes to an ACLU attorney, and so set in motion a lonely journey of calling America to account. He resisted against racism and hatred, holding his motherland to her ideals, even as she so grievously failed him — a failure which, to this day, she seems prone to repeat. It's a day to remind ourselves that Fred Korematsu was never more American than when he resisted.

And so his photo remains on my desk. It's propped up next to the photo of Goichiro Suehiro. I like that contrast of military garb and business suit, of soldier and resister: it tells me there are many ways to be American. Both men, in the ugly abyss of racism, fought for America. One fought overseas to protect her freedom; the other fought here in the courts to protect her from her worst tendencies. But they were both American, and they both loved America, and they both fought like hell for her.

Born in Manhattan and raised in Hong Kong, Andrew Fukuda earned a bachelor’s degree in history from Cornell University and worked as a criminal prosecutor for seven years before becoming a full-time writer. Fukuda’s experience volunteering with the immigrant teen community in Manhattan’s Chinatown led to the writing of "Crossing," his debut novel that was selected by ALA Booklist as an Editor’s Choice, Top Ten First Novel, and Top Ten Crime Novel. His latest novel, "This Light Between Us: A Novel of World War II," is out now. Fukuda currently resides on Long Island, New York, with his family. You can find him at www.andrewfukuda.com