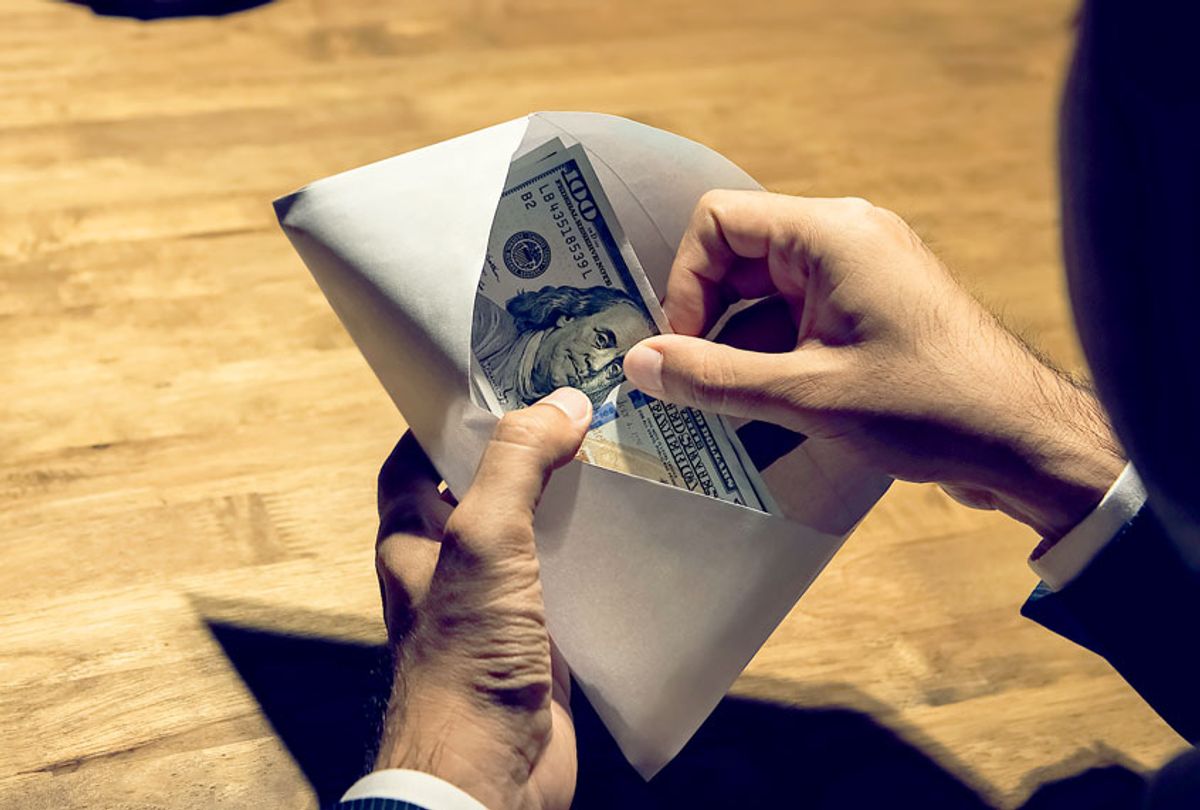 Money in an envelope (Getty Images/Kritchanut)
--

President Donald Trump's allies are trying to win over black voters by offering envelopes of cash at pro-Trump events around the country, Politico reports.

A charity run by prominent Trump supporter Darrell Scott, a Cleveland pastor, is holding events in black communities where organizers "lavish praise on the president as they hand out tens of thousands of dollars to lucky attendees," according to the report.

The first giveaway took place in Cleveland last month. Winners were handed "increments of several hundred dollars, stuffed into envelopes," Politico reported. A second giveaway scheduled in Virginia for Martin Luther King Jr. Day to honor Trump and son-in-law Jared Kushner was postponed, but the group is planning more giveaways in the future.

The Cleveland event featured a $25,000 giveaway and an appearance from Trump aide Ja'Ron Smith, one of the highest-ranking black officials in the White House, and Fox News pundit Geraldo Rivera.

The events are organized by Scott's Urban Revitalization Coalition, which is registered as a tax-exempt charitable organization. Scott is the co-chair of the Trump re-election campaign's "Black Voices for Trump" initiative, which also features former Republican presidential candidate Herman Cain and Fox News commentators Diamond and Silk.

The organization was registered in 2017, according to Politico, and began promoting the Opportunity Zone program that Scott championed in the West Wing. The program is now under investigation after The New York Times and ProPublica reported that it provided tax breaks intended to help poor neighborhoods to Trump's rich friends.

The group later held events with Treasury Secretary Steven Mnuchin and former Kentucky Gov. Matt Bevin, though their earlier events did not feature cash giveaways, according to the report.

Some legal experts questioned the group's tax-exempt status because it does not appear to screen winners for legitimate charitable need.

"Charities are required to spend their money on charitable and educational activities," Marcus Owens, the former director of the Exempt Organizations Division at the IRS, told Politico. "It's not immediately clear to me how simply giving money away to people at an event is a charitable act."

One video showed organizers bragging that one of the winners, whose son apparently plays in the NBA, did not "need the money."

Scott told the outlet that most prizes are between $300 and $500 and that the charity requires anyone who receives more than $600 to file appropriate tax forms. He would not say who was funding the giveaways.

"I'd rather not," he said. "They prefer to remain anonymous."

The Trump campaign denied any knowledge or ties to the events. Adav Noti of the election law watchdog Campaign Legal Center told Politico that it's unclear whether the group's pro-Trump events are allowed by law. Charities are barred from supporting or opposing candidates in elections.

"If they do it independently and it really is agenda focused, not electoral, yes that's permissible under campaign finance law," Noti said.

But determining what crosses the line into electoral speech can be a "fine line," former Federal Election Commission counsel Larry Noble told the outlet.

A spokesperson for the group insisted to Politico that the events are intended to promote "economic development in inner cities," despite conspicuously honoring the president and featuring his senior aides.

"President Donald Trump — the one that they say is racist — is the first president in the history of this country to incentivize people who have the money to put it into … urban areas," Lanier said.

One winner, dressed as one of Santa's elves, accepted an envelope of cash from Lanier and shouted, "Four more years of President Trump. Yay!"