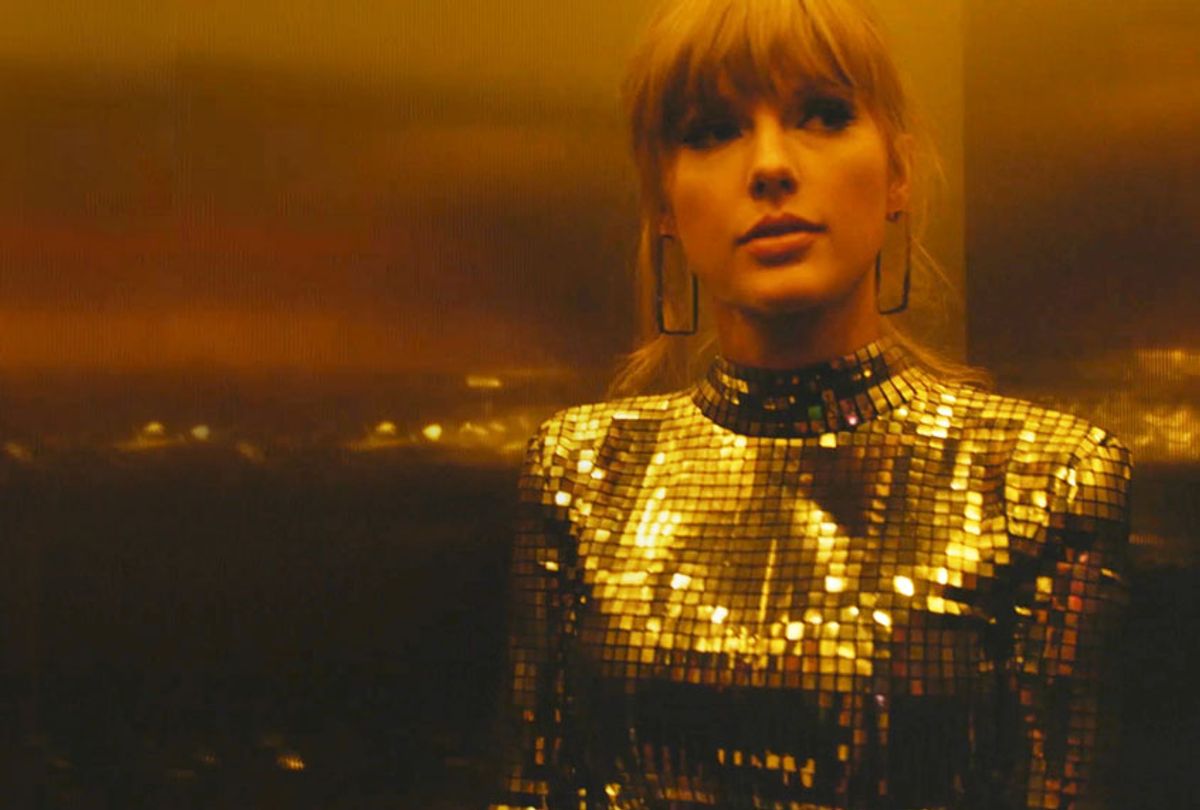 Taylor Swift sits cross-legged on a window seat, gently drawing her fuschia nail across the cover of the diary she began keeping when she was 13. "It says, 'My life, my career, my . . . my dream, my reality,'" she says, reading from the cover. Then, after flipping through a few pages, something catches her eye amongst the curly penmanship; she pauses, before thoughtfully saying: "My entire moral code, both as a kid and now, is a need to be thought of as good."

This is how "Miss Americana," a new documentary about Swift, begins — immediately thrusting viewers into a sort of and war between her carefully constructed identity as America's sweetheart and her polarizing public image. The film, which debuted at Sundance earlier this week and is now streaming on Netflix, is structured as a series of highs and lows.

We have a montage of her meteoric rise to fame, from her roots as 15-year-old country star to her sequined foray into pop stardom, propelled in large part by her own work ethic and tenacity. Swift was selling out stadiums, she was making headlines, she was a music industry darling. She was trained, Swift says, to be happy when she got a lot of praise; and at the zenith of this narrative arc, we see her standing on the stage in front of a sold-out show, absolutely beaming.

"I became the girl everyone wanted me to be," she said.

But then in 2009, the applause was replaced by booing. In this case, the jeering wasn't actually meant for Swift. It was at the VMA awards; she was there to accept the award for Best Female Artist Video for "You Belong With Me," which sparked the now-infamous Kanye West incident. And the booing began right after the words, "I'mma let you finish," left his mouth, escalating to a light roar as Swift stood on stage, 19 years old and visibly embarrassed.

Swifts recounts the night to the camera, explaining that in a room like that — large and cavernous — she couldn't actually tell whom the audience was actually booing. This was her first real taste of public disapproval, and the solidification of the documentary's dominant emotion: loneliness.

An inherent part of being a pop star like Swift is found in the creation and subsequent shedding of personas; it's a luxury (who hasn't dreamed of completely reinventing themselves?), but also a challenge. It's another tug-of-war, Swift explains rather clinically. You want to be crazy enough to be interesting, but not so crazy it alienates people. You want to be adventurous that people deem that you've grown as an artist, but not so offbeat that you lose your fan base. Sultry enough that you sell, but not so salacious that it imperils your good-girl reputation.

But in real life, when all the personas are dropped, all the layers are stripped back, and Swift is left facing herself in the mirror, she sometimes dislikes herself.

While the documentary feels a little staged at times (we're dealing with Taylor Swift, after all) "Miss Americana'' director Lana Wilson is surprisingly unflinching in how she leans into this. Sometimes it's hard to watch — like when Swift, upon rewatching a clip of herself, murmurs that she has a "slappable" face — but more often it is endearing, giving viewers a better understanding of just how lonely it truly is at the top.

In the documentary, this is illustrated through a splashy display of snarky headlines, a smattering of #TaylorSwiftIsCancelledParty tweets and a brief review of the singer's very public celebrity feuds; but the moments when the film's voice is most effective is in its quietest moments, like when Swift is alone after a successful show and remarks to no one in particular: "Shouldn't I have someone that I could call right now?"

According to Swift's telling, her contempt for herself was paralyzing at times. This revelation also led to one of the film's most compelling moments.

Swift is sitting in a car, speaking casually to the camera about how she won't look at paparazzi photos of herself anymore. When she used to view them more frequently, they'd send her into a downward spiral about her body — especially when commenters would remark that she'd gained weight or gotten pregnant. Slowly, she began to stop eating.

"I thought it was normal to feel like you were going to pass out in the middle of a concert, or at the end of a concert," Swift said.

From there, Swift candidly speaks about struggling with an eating disorder. This is a topic that is often skated over in documentaries about pop stardom. Our culture views celebrities as products for consumption and, by virtue of this, there's an overt pressure to conform to standards that have already been deemed profitable.

We saw this play out in "Beyoncé: Homecoming." After coming off her pregnancy, the singer needed to fit back into her costuming and embarked on a strict eating regime pre-Coachella that consisted of "no bread, no carbs, no sugar, no dairy, no meat, no fish, no alcohol." When she described how she felt about it, she uttered one word: "Hungry."

This was presented relatively uncritically, though. The sense being that getting back to her pre-pregnancy weight was just part of being a superstar — and in our current society, it absolutely is. But when Beyoncé describes her post-pregnancy weight as "every woman's nightmare," it's like she is both a proponent and victim of a damaging diet culture.

In "Miss Americana," it's sadly refreshing to see a celebrity performer say that it's, you know, okay to eat. This is the first evidence of Swift balking against the pop music machine that both made and restricts her. There's a certain point in the documentary when Wilson ties Swift's loneliness to the realization that  no matter how you play, you can't win in everybody's eyes. So, she's decided to invent her own rules.

This is where in "Miss Americana," Swift begins to ascend yet another peak. We watch as she begins to record "Lover," as she films a dazzling music video with Brendon Urie, as she actually speaks out about her political beliefs, something the star had been reticent to do — a decision that sparked a lot of criticism during the 2016 election.

This may be her final reinvention, Swift muses to the camera. The public may be nearing their limit for "tolerating [her] being successful." But the artist seems to be oddly at peace with letting all that — the adoration of her fans, the awards, the records — go, at least for a bit. Because, quite simply, she's learned to like herself.