Republicans' Trump whitewash is nearly complete. But will it cost Mitch McConnell his GOP Senate majority? 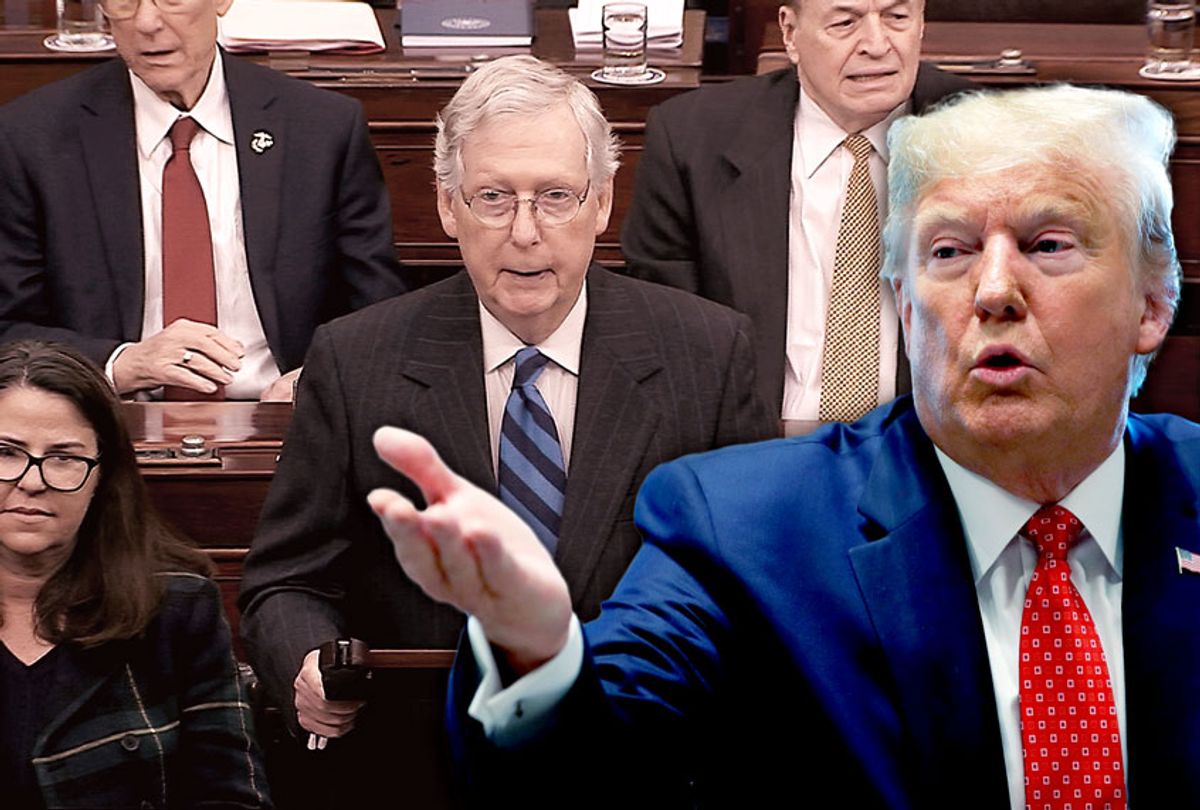 Mitch McConnell's cover-up of Donald Trump's corruption looks like it will soon be complete — but not before a betrayal so big it could blow the GOP's chances of holding the Senate in November.

After 10 days of arguing over whether to allow evidence in Trump's impeachment trial, the Senate is expected to vote Friday on whether to allow witnesses, a vote Majority Leader Mitch McConnell now believes he will win. Republicans are determined to fast-track the end of a trial where the defendant has offered no real denial of what he's accused, has refused to provide any material evidence and has already paid off the jury.

Such a lazy defense is precisely why McConnell wanted to avoid an impeachment process altogether. Public opinion had decidedly turned against Trump and the GOP Senate since the trial began. Hundreds took to Capitol Hill on Wednesday to call for witnesses, as 75% of voters in a new Monmouth University poll say witnesses should be allowed to testify. A straw poll on witnesses among GOP senators earlier this week was tighter than McConnell expected after it was revealed that former White House national security adviser John Bolton has a forthcoming tell-all which reportedly lays bare Trump's plan to pressure Ukraine into investigating Joe Biden.

While there is still virtually no chance that the Senate will vote to remove Trump (or that it ever would, on any imaginable evidence), he and his advisers made a huge mistake by not alerting McConnell that the White House had Bolton's manuscript at the end of December. They knew a giant boulder would  hit the impeachment trial, yet it appears as though they let McConnell get bowled over right along with the rest of the Republican Party. Now McConnell is left looking like he's lost control of his own caucus. Mitch's woes this week means that the pressure exerted so far is working. The effort to make sure Trump's crimes are elucidated in full public view is paying off.

"They are kicking our ass," House Minority Leader Kevin McCarthy, R-Calif., reportedly conceded in a closed GOP meeting this week, referring to Democrats. Despite pulling a record off-year fundraising haul, the National Republican Congressional Committee is being significantly outmatched by the Democratic Congressional Campaign Committee's fundraising. The House Democrats' campaign arm collected $40 million more than its GOP counterpart in 2019. It doesn't help that of the 28 current House members who have announced plans to retire, 22 are Republicans.

Dire numbers like that are why McConnell is eager to try to wrap up this impeachment trial with haste. He wants to protect his vulnerable senators, which include Susan Collins of Maine, Cory Gardner of Colorado and Martha McSally of Arizona, all of whom must face voters in the fall and could very well lose their seats. Every week these endangered Republicans are forced to answer questions about why key witnesses aren't allowed to testify — something an overwhelming majority of Americans want. Republicans could show a semblance of morality if they voted to hear actual witnesses, as customarily happens in trials. This stonewalling is making the entire party look like a bunch of corrupt protectionists.

As Rep. Adam Schiff of California, the House's lead impeachment manager, pointed out, Trump's own lawyers made an "effective" case for why the Senate should call Bolton as a witness after every single first-hand witness was blocked in the House inquiry. But the president's lawyers did their best this week to make Senate Republicans' job as difficult as possible.

Trump's attorneys touted misdirection and conspiracy theories as facts, proffered ridiculous legal arguments that would effectively turn the executive branch into an imperial palace and argued, confusingly, that the House should enforce its subpoenas in court and that it would be unconstitutional for any court to enforce those subpoenas. It's been a mess.

First Ken Starr, of Clinton impeachment infamy, offered a nonsensical "both sides do this" argument to argue against what he called an era of impeachment. Then lawyer Pat Philbin repeated the CrowdStrike conspiracy theory, a Russia-fueled misinformation campaign, as an actual part of the White House defense of Trump's Ukraine pressure campaign. Trump attorney Jay Sekulow then claimed that the revelations from Bolton's manuscript — that Trump tied the withholding of military aid to Ukraine to investigations into his political rivals — were "inadmissible" and that impeachment "is not a game of leaks and unsourced manuscripts." Finally, Alan Dershowitz provided the most laughable, if not most damaging, of all the president's flimsy defenses: If a president does anything untoward with the aim of getting re-elected, he is thereby acting in the national interest as he perceives it, and therefore such action is not impeachable.

Republicans are clearly relying on fatigue at this point. Tire Democrats out by making them fight for a fair trial for a long time. There is a reason why no Republican has actually tried to defend the Trump's actions: It is abundantly clear that he extorted a foreign government for his own personal gain. They started out denying it and are now admitting it, while saying that such an obvious and egregious offense is not "impeachable."

Every Republican understands that at the first hint of a fair trial, the floodgates would open. There is no worse position for a vulnerable GOP senator up for re-election than voting to acquit Trump after John Bolton testifies forcefully against him. The best thing that could possibly happen for Democrats' chances at retaking the Senate — which remain slight, but look less so every day — is for so-called moderate Republican senators to play a willing part in this blatant cover-up. Like a mobster in a Scorsese film, Trump's defense is now making them dig their own graves.