Zero hour for Democrats: At long last the voters will speak — if we can hear them

After a year of bitter Democratic infighting, Iowa gets its chance to shape the narrative. Hell yeah, it matters 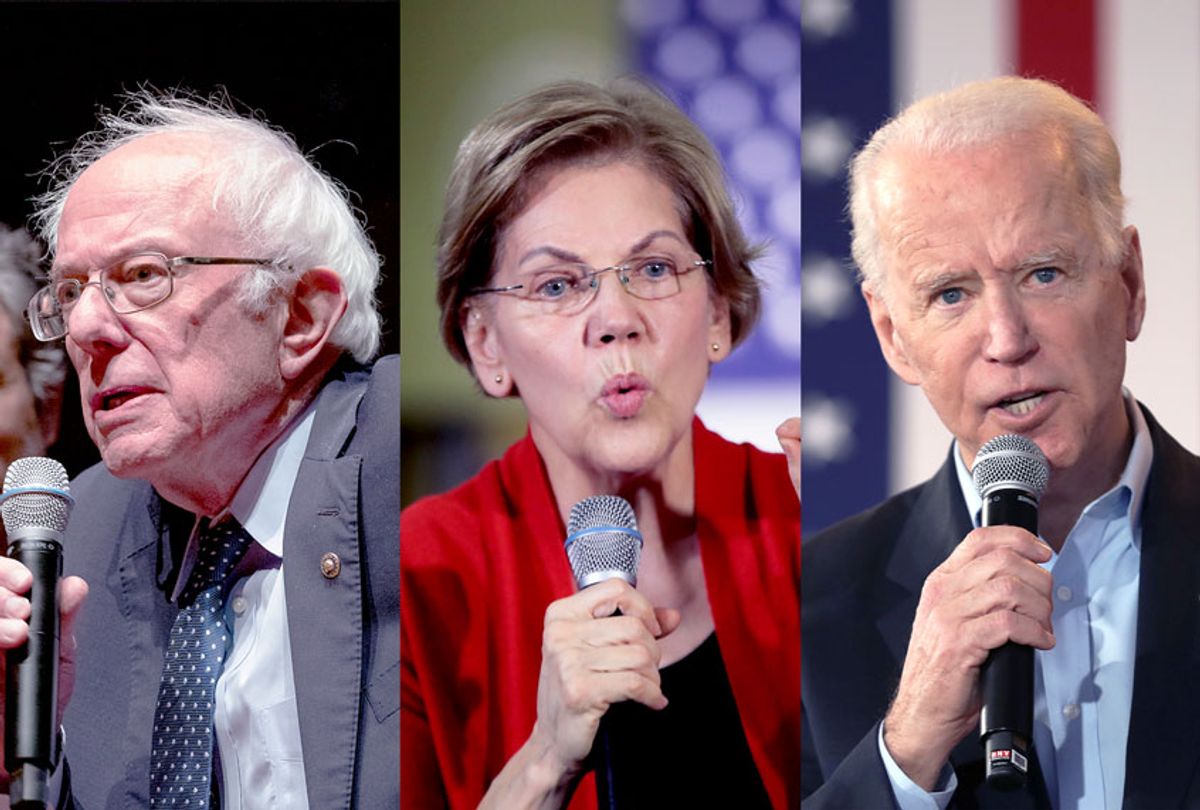 Lenin's famous nostrum that there are decades where nothing happens and weeks where decades happen has pretty much died of overuse in the Trump era: Just Google the phrase to see how often it has been applied at how many different points on the calendar. Maybe the phrase needs an adjustment: There are too many weeks when everything seems to happen at once, yet nothing seems to change.

We are nearly done with an impeachment trial in the U.S. Senate, which is likely to conclude on Wednesday with the so-called acquittal of President Trump. It might be the ultimate Trump-era example of a pseudo-historical or pseudo-meaningful event, one that carries all the earmarks of significance yet also feels hollow. How many of us will look back on this farcical spectacle a year from now, let alone 10 or 20 years from now, with some sense of vivid memory, or some belief that it shaped the future?

Nonetheless, this will be a hell of a week, whether or not we remember anything about it later. Between now and the thoroughly cynical vote on articles of impeachment in the Senate we will have a pileup of unrelated yet interwoven media spectacles. The Super Bowl is on Sunday, a few hours after the publication of this article. Either the Kansas City Chiefs or the San Francisco 49ers will win the game, but the media and political classes will of course be hypnotized by Trump's interview with Sean Hannity, which is expected to include 1) numerous untrue statements, 2) declarations of victory over all possible foes and critics and 3) incoherent gloating. In fact, expect to hear all of that within the first minute.

Skip ahead to Tuesday and Trump will deliver the State of the Union to a joint session of Congress, an act of routine political theater delivered in what could superficially be described as extreme circumstances. Here's a spoiler alert for you: The speech itself will be tedious garbage, only barely worth watching for the most indoctrinated Trump cultists and the most hardened left-liberal masochists. Republicans will pretend to be jubilant and Democrats will pretend to be grave and somber — but in fact all of them will be preoccupied by whatever just happened the previous night in the middle of the country.

I'm talking about the Iowa caucuses, the one wild card in the week's onslaught of news and a genuine pivot point in the political calendar. (No, I'm not claiming I know who will win the Super Bowl, or that it's stupid to care about that. Niner faithful! But, you get it: It's a football game, and the stakes are well understood.) After a full year of acrimonious combat over poll numbers and donations and social media oneupmanship — combat that drove numerous plausible-sounding contenders from the field — the Democratic race suddenly shifts to a blitzkrieg of actual voting, amid intense anxiety around the unanswerable question of who in Christ's name can actually beat Donald Trump. Just over a month from now, after New Hampshire and Nevada and South Carolina and then Super Tuesday on March 3, the once-overcrowded cast of Hickenloopers and Gillibrands will almost certainly be down to two or three candidates at most.

Those candidates will probably be named Joe Biden, Bernie Sanders and Elizabeth Warren, but let's put a lot of emphasis on that probably. Conventional wisdom in politics is a currency whose value keeps falling, as you may have noticed. But this is also the moment when even those of us who claim to disdain the "horse-race narrative" will suddenly become obsessed by it. Which may reveal a great truth: Winning elections is possible, whereas governing America is not. Topic for another time!

We can certainly say that in historical terms the Hawkeye State has an exaggerated importance in terms of picking Democratic presidential nominees. There have been only three occasions since 1972 when the Iowa results didn't point to the eventual winner, and one of those doesn't really count. (In 1992, Sen. Tom Harkin of Iowa was running, and other candidates simply skipped the state.) In the last four contested Democratic cycles, Iowa's record has been perfect, at least when it comes to measuring the median temperature of the Democratic voter: Al Gore in 2000, John Kerry in 2004, Barack Obama in 2008 and Hillary Clinton in 2016.

Whoever wins in Iowa — even by the narrowest of margins, as with Clinton four years ago — will immediately be proclaimed the frontrunner by the media, and will likely experience an immediate boost in the polls elsewhere. Anyone who finishes outside the top three — again, even in a tightly packed field, as is certainly possible this year — will be perceived as a dead (wo)man walking, and will become the subject of mournful soliloquies by TV pundits and affluent donors.

I'm not here to tell Andrew Yang or Amy Klobuchar that they can't find a rationale for fighting on after a fourth-place finish in Iowa. Either of them certainly would. I'm saying that the meta-narrative will have turned against them, and in a realm that is almost entirely symbolic (such as American electoral politics) that is likely to prove fatal. Iowa is a kind of game-theory experiment in which winning is certainly important, but outperforming expectations, and thereby reordering the campaign meta-narrative, is even more important.

For the top three or four contenders, these goals take different forms. Having been dismissed by nearly the entire mainstream commentariat as laughable Commie breakfast leftovers for an entire year, Bernie Sanders suddenly finds himself leading the polls in both Iowa and New Hampshire, and now has inflated expectations, of all things. As Dave Weigel of the Washington post recently observed on Twitter, you have to wonder about the viability of a political party that sleeps on the same outsider candidate two cycles in a row.

If Sanders actually does win both states, then the more mainstream wing of the Democratic Party may indeed go into full flip-out, panic-room mode, as advertised, and unleash its lab-grown clone hybrid of Biden, Hillary Clinton and Mike Bloomberg. But anything less than that — and perhaps even a narrow victory in one or the other state, accompanied by a "surprisingly strong" result by someone else — and you can expect to hear a lot of chatter about how the "Bernie boomlet" that absolutely nobody predicted is now over, and the natural order of politics that has conclusively been proven to no longer exist is reasserting itself.

Joe Biden, on the other hand, just has to not lose too badly. It's probably an achievable goal. He's got the lowest target to hit of any major contender, thanks to the perception that he will win South Carolina easily and still dominates among black voters, particularly in Southern states. Finishing a close second in Iowa is pretty much a win for Biden, and a third-place finish in the ballpark of 20 percent would be entirely acceptable. If you want to know why most party insiders still think Biden is likely to muddle through to the nomination, it's because the calendar and geography of the primary season are engineered to favor him. That said, a fourth-place finish, especially below the all-important 15 percent threshold, could be disastrous.

Elizabeth Warren's situation is harder to gauge, but the stakes are really, really high. Given the coalitional nature of caucus voting, she could do surprisingly well in Iowa — or surprisingly poorly. Winning, or finishing a strong second, would clearly validate her entire campaign approach, and erase all the semi-bad news that followed her polling surge last summer and fall. A relatively strong third after Biden and Sanders wouldn't finish her off, but in the hard, cold light of Tuesday morning, it won't feel good at all. She isn't likely to win New Hampshire or Nevada, has zero chance in South Carolina, and is not particularly well positioned in any of the big Super Tuesday states (except Massachusetts).

Pete Buttigieg, who for about five minutes a few weeks ago looked like the leader in Iowa, needs to finish in the top three, thereby delivering a TKO to some leading contender (probably Biden or Warren). A win or a strong second-place finish to Sanders would dramatically reorder the race; a fourth-place finish is the end of the line. Yeah, I know: He's got all the campaign money in the world and will certainly deliver a nice speech to his followers and march on to New Hampshire, no matter what. But Iowa is the last stand for Mr. Overachiever Man — and I'll leave the gags about how there actually is a Waterloo in Iowa to him.

Amy Klobuchar has this one chance to avoid becoming the all-time winner of what I've previously called the Jon Huntsman Prize, awarded every four years to a middle-road candidate who is lavished with praise by the media but blissfully ignored by actual voters. She's had some encouraging poll numbers in Iowa and will literally bore you to death by explaining that she comes from a neighboring state and speaks the language of Midwestern pragmatism. It's also true that in national polls of Democratic voters the "Klomentum" is barely perceptible: In the RealClearPolitics polling average, she stands in seventh place at 4.3 percent. Even in the universe remade by Donald Trump, the prospect of going from there to the Democratic nomination is pretty nearly nonexistent.

Who will win, and what will it mean? I honestly don't know, and as Bill Moyers warned me years ago, those are the wrong questions. We won't really know anything more about American politics on Tuesday morning, when we wake up to a winner in Iowa, than we know now. We will know what story we will tell ourselves about Democrats and voters and the nature of the country over the next few weeks. But that story too will shift before the hot weather returns, and then shift again by November. Whatever that story is, don't mistake it for the truth.