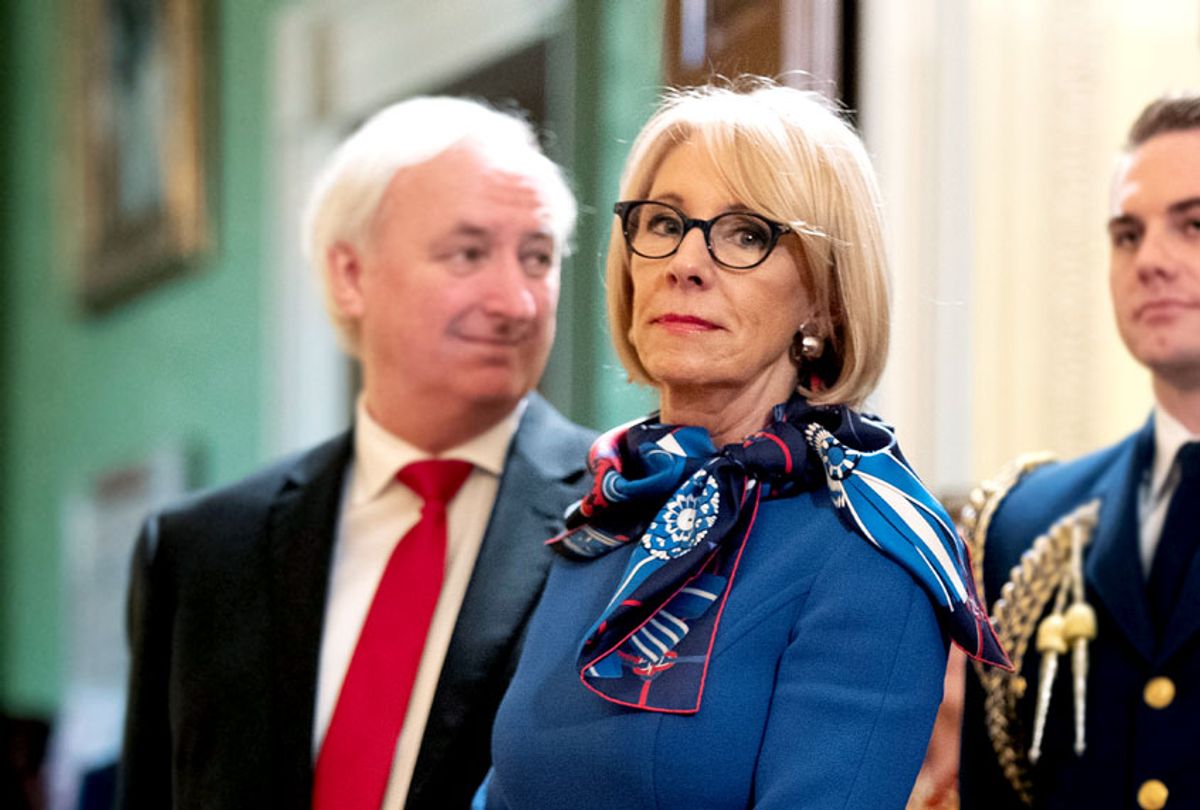 House Oversight Chairwoman Carolyn Maloney, D-N.Y., threatened to subpoena Education Secretary Betsy DeVos after she "stonewalled" the committee in setting up a date for her testimony.

Maloney said in a letter to the secretary that she invited DeVos to testify last month about "critical issues facing the Department," including federal student loans, the department's policies regarding campus sexual assault and harassment, and DeVos' failure to protect students defrauded by for-profit colleges.

Maloney noted that DeVos had time to travel to Iowa and Pennsylvania this week to campaign for President Trump but repeatedly "delayed" her testimony to Congress.

"Unfortunately, it now appears that rather than agreeing to testify before Congress — which is your obligation as a public servant of the American taxpayers — you made plans to appear at multiple political events for President Trump's re-election campaign," Maloney wrote. "Instead of testifying before Congress, you are now apparently going to Iowa to campaign on behalf of President Trump today and then to Pennsylvania for another campaign event for him on Wednesday."

Angela Morabito, a spokeswoman for DeVos, told Politico that the department has complied with all "lawful oversight requests."

"It's Groundhog Day all over again!" she said. "Democrats in Congress are grandstanding for political points while the Department continues to get work done."

But Maloney said that DeVos should testify to Congress if she has time to campaign for Trump, adding that the committee may legally require her to show up.

"Ignoring — or defying — requests for congressional oversight in order to spend your time campaigning for President Trump is an abuse of your position as Secretary of Education," Maloney said. "I am not suggesting that you may never campaign for the President, but you may not do so when it interferes with your official duties, including your duty to testify before Congress. If you will not agree to testify voluntarily, the Committee will have no choice but to consider issuing a subpoena to compel your appearance."

Maloney gave DeVos four days to confirm she will testify before the committee in March or she will be issued a subpoena.

Rep. Deb Haaland, D-N.M., who sits on the Oversight Committee, called DeVos' refusal to testify before the panel "ridiculous."

"Our kids' futures should be a top priority but instead, Secretary DeVos is shirking her responsibility as cabinet secretary for her own political gain," she said.

DeVos' controversial moves as Education Secretary have become a focal point on the campaign trail, where Democrats have criticized her for mismanaging student loan forgiveness programs and for defending for-profit colleges.

"Betsy DeVos is the worst Education Secretary in our modern history," Sen. Bernie Sanders, I-Vt., said last year. "Over and over, she has protected for-profit corporations that exploit students and educators."

"Betsy DeVos is the worst Secretary of Education we've seen," agreed Sen. Elizabeth Warren, D-Mass. "She and her team are up to their eyeballs in conflicts of interest. Instead of championing our students, they protect for-profit colleges that break the law and cheat them."

Jill Biden, a longtime college professor and the wife of former Vice President Joe Biden, vowed on Monday that her husband would appoint a teacher to replace DeVos if he wins.

"We're going to have a secretary of education who has been in the classroom. These are all things that I have personally seen and have been important to me as a teacher," she told MSNBC. "When he's elected president, when you look right next to him, there will be standing a teacher."

Joe Biden made a similar vow while speaking at the National Education Association forum in Houston in July.

"First thing as president of the United States, not a joke, first thing I will do is make sure that the secretary of education, not Betsy DeVos, is a teacher," he said. "So the press doesn't get confused, I promise I'm not going to appoint my wife. She'd be a good one."